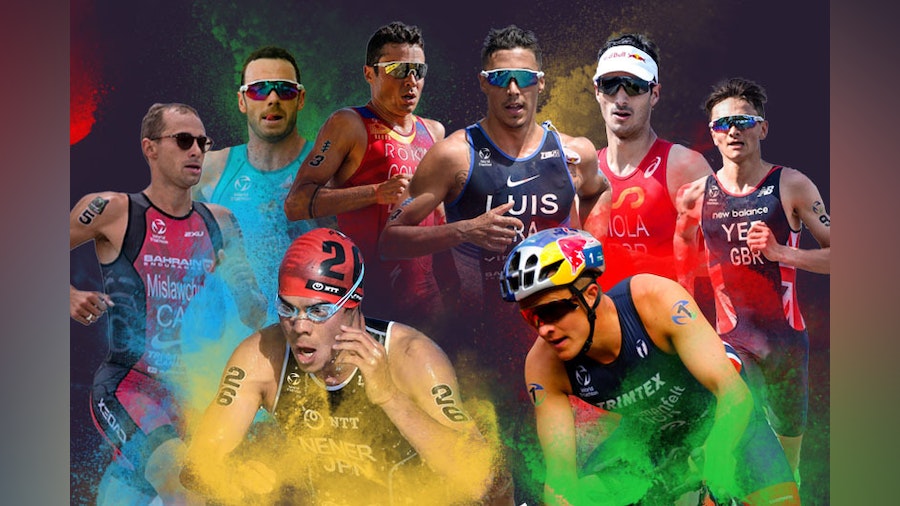 Take a look across the men’s start list for the Tokyo 2020 Olympic Triathlon and it is impossible not to get excited by what lies ahead once the athletes have dived into Odaiba Bay after the horn sounds at 6.30am local time on 26 July. The talent is deep, the podium potential vast, the absence of a past Olympic Champion notable. Yes, there will be a first-time Olympic Champion this year but only at the end of a race with just one certainty: whoever comes out on top couldn’t be more deserving of the biggest prize in sport.

The course and conditions that they will face are far from typical. The 1.5km swim comprises two laps but, at 950m, the first is considerably longer and the water could be nudging 30C. The 40km bike is fast, flat and technical, between skyscrapers and along the water’s edge, the eight laps including a long, fast, purpose-built ramp into transition. Then, there’s the 10km run in the heat and humidity of Tokyo summer, an added challenge even with the extra measures in place to keep the athletes as cool as possible, for as long as possible.

Throw in a dozen World Series gold medallists, many more World Cup winners, young guns and big names, measured experience and youthful exuberance and you have all the ingredients for fireworks in the Tokyo 2020 men’s Olympic Triathlon. See how to watch the Games where you are here.
—

France’s Vincent Luis was crowned World Champion in 2019 at the end of a see-saw season, but it was in a curtailed 2020 that he showed absolute power, smashing all four races at the end of the year. Invariably leading out of the water and never relinquishing his grip, he dominated from the relocated sprint-distance of Hamburg to the tough cobbles and climbs of Karlovy Vary. Luis had started to look unstoppable, every bit the Olympic Champion in waiting.

At the first race back of 2021, he didn’t have it all his own way, though. This time it was one of the men who had chased the Frenchman so hard in the heat and hills of Arzachena – Norway’s Kristian Blummenfelt – who threw it down and began to set out his own bid for Olympic gold. If victory in WTCS Yokohama was a statement, a second gold in Lisbon a week later saw the 2019 Grand Final winner lay his credentials right out for all to see. Arzachena and Leeds may not have been medal-winning displays, but he was never out of the hunt.

The silver in Yokohama went to Belgium’s Jelle Geens, and he will have taken a lot away from the final stages of that race. As one of the strongest runners in the field, he won’t fear a deficit off the bike, depending on how much daylight someone like teammate and WTCS Leeds bronze medalist Marten van Riel tries to open up as one of the toughest cyclists in the mix.

The big story in Leeds was Great Britain’s Alex Yee finally putting to bed any doubt that he was ready for a shot at an Olympic Games. The swim wasn’t the fastest, the bike pack was large and out of T2, the 23-year-old was well-placed to deliver one of his potent run segments. It was the swagger with which he did it, on a tough course but in front of a roaring home crowd, that really stood out, and with teammate Alistair Brownlee injured and unable to defend his crown, Yee has become his natural successor, hitting form at just the right time.

Of course there is GB’s second male, Jonathan Brownlee, ready and waiting to prove he can become the first man to medal in three successive Olympic Triathlons. Finishing with bronze in London and silver in Rio, Jonny may miss his brother’s driving presence on course, but after victory in Arzachena ahead of the likes of Mario Mola and Blummenfelt, it would be unwise to write the younger Brownlee off.

Mola himself has been approaching these Games differently, cherry picking specific events in new locations to test his race readiness rather than grinding from one to the next. Three world titles in a row are all the proof required of his abilities on the big stage, how he has been able to translate the extended training blocks into Olympic performances will be the next big test.

Fellow Spaniard Javier Gomez would also love nothing more than adding Olympic gold to his considerable medal tally. After finishing 4th in Beijing and 2nd in London, the five-time World Champion has unfinished business at the Games, and though preparation hasn’t been ideal and a crash ended his WTCS Leeds challenge early, there is little that could be added to the 38-year-old’s armoury of that potentially crucial experience at the top level.

Looking across the Atlantic, USA’s Morgan Pearson has burst onto the triathlon top table with back-to-back Series medals in 2021, guaranteeing his place on the team in Yokohama after carving his way through the field with a 29m30s 10km. Like Yee, position and legs out of T2 will be crucial, like Yee, an Olympic medal at the first time of asking is a big possibility.

Canada’s Tyler Mislawchuk took the tape in the Test Event back in 2019 and will relish the heat, just as he did en route to Huatulco gold in June. Like Mislawchuk, New Zealand’s Hayden Wilde is a smaller athletes for whom the temperature seems to barely make a dent in his all-out approach and he too has already delivered a medal on this very course back in 2019. A career-best 5th in Leeds after nearly two years away from the blue carpet was also an impressive statement.

Hosts Japan will count on two men that have shown in recent months that they can mix it with the best; Kenji Nener and Makato Odakura. Nener was crowned Asia Triathlon Champion in April, while Odakura secured his place on the squad with 12th at WTCS Leeds.

Elsewhere on the start line, European potential is strong. From Germany’s Jonas Schomburg and Justus Nieschlag to Leo Bergere and Dorian Coninx of France, Gustav Iden and Casper Stornes of Norway and Hungary’s Bence Bicsak, the podium is right in their sights.

Southern hemisphere strength in the form of Australia’s Jacob Birtwhistle and South Africa’s Rio 2016 bronze medalist Henri Schoeman offer plenty of one-day brilliance, both having shown to be hugely capable of putting themselves in winning positions on some of the biggest stages in the sport.

Two pairs of brothers take to the start line, Shachar Sagiv and Ran Sagiv representing Israel, both skilful on the bike and Ran the winner of a bronze medal at the U23 World Championships in 2019. Dmitry Polyanskiy and Igor Polyanskiy representing the the ROC are hugely experienced, with a host of World Triathlon podiums and four Olympic appearances between them.

The ASICS World Triathlon development squad will be represented by Chile’s Diego Moya, Syria’s Mohamad Maso and Mehdi Essadiq, the first Moroccan triathlete to compete at an Olympic Games. At the age of 21, Hong Kong’s Oscar Coggins will be the youngest man on the Tokyo 2020 start line.

As if Mixed Relay races were not exciting enough, add to the mix a penalty to be…
Germany’s Merle Brunnée and Belgium’s Seppe Odeyn claimed victories at the 2021…
After extensive discussions with Bermuda’s health and government authorities,…
more news →