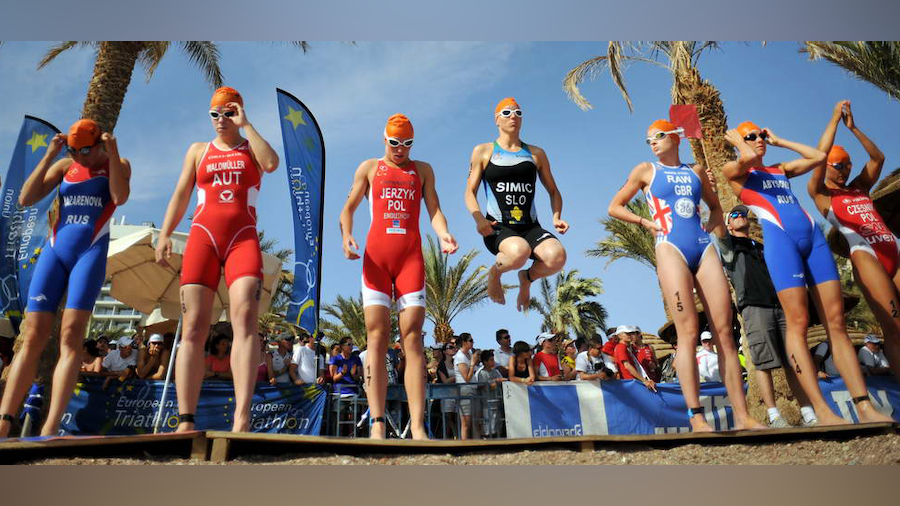 As we make our way down to the business end of the Olympic qualification process, each and every race has the potential to have a big impact on the final field for the London 2012 Olympic Games. It’s time to delve into the Olympic simulator again, this time with the final Continential Championships, the 2012 Eilat ETU Triathlon European Championships, and the 2012 Ishigaki ITU Triathlon World Cup. If you need a refresher on the process, click here to view Olympic Qualification 101.

Elite Women’s Qualification
While Nicola Spirig collected her third European Championship in Eilat, the big movement in the women’s qualification simulation all happened in Ishigaki. While Spirig’s win moves Switzerland into the European continental spot that had previously been held by France courtesy of Emmie Charayron, it does not have a huge affect on the overall placings as France still have three spots, while Switzerland currently only have two.

This is because Spirig was already holding Switzerland’s first spot and it depends on their third athlete’s position that will determine if they can send three women to London.  While Daniela Ryf had moved just ahead of Germany’s third woman Kathrin Muller with a sixth place in the opening ITU World Cup in Mooloolaba, Muller ran herself into sixth place in Ishigaki on Sunday – therefore propelling Germany into eighth place on the list and for now, in the position to send three women to London. Muller is now 277 points ahead of Ryf, but Ryf has the chance to get the jump in Huatulco where she is on the start list and Muller is not. An eighth place or above would be enough to move Switzerland back into a place with three positions. Charayron still ended up on the podium in Eilat, and losing that continental spot didn’t really change France’s position.  While they lose that automatic place, Charayron is still France’s top-ranked athlete and they are fifth out of eight NOCs. Aside from Muller’s result pushing Germany into eighth place, the biggest result in Ishigaki was Kathy Tremblay’s win. Her first career ITU World Cup win couldn’t have come at a better time, after edging herself into the very last place on the Olympic simulation after Sydney, she moved up another 15 places on the list to put herself at #46 in the Olympic simulation. After months where Paula Findlay’s ranking was the only Canadian women’s spot on the list, Tremblay’s perfect timing means that Canada are now in better position to send two women to London. Tremblay is also in a great spot to fill that place herself, although 2012 PATCO Champion Sarah-Anne Brault’s bronze medal in Ishigaki has kept her in the conversation. In terms of the rest of the list, Yuliya Yelistratova has moved Ukraine back into the picture after Eilat, while Claudia Rivas has held onto a spot for Mexico after winning the Mazatlan ITU Triathlon Pan American Cup last weekend. Yi Zhang is currently holding a spot for China after her 16th place finish in Ishigaki. Mateja Simic is still in a good position to be the first athlete from Slovenia to compete in triathlon at the Olympics.

Elite Men’s Qualification
For the second week in a row, the big mover in the men’s rankings was Russia’s Ivan Vasiliev. After his sixth place in Sydney, Vasiliev took that form directly to Europe and claimed his first European Championships podium with bronze. Added to his points from Sydney, Vasiliev has added almost 1000 qualification points to his tally in just over a week. After Sydney, Russia jumped from ninth to fifth.

This week Vasiliev’s result pushed him ahead of Spain’s Jose Miguel Perez, putting Russia just behind third-ranked France, with Spain in fifth. New Zealand are now sixth, Portugal seventh – thanks to Joao Pereira’s result in Eilat – Australia eighth and Canada ninth. That means if the Olympic field was finalised today, Canada could only send two men. Simon Whitfield is Canada’s third athlete, and currently sitting 64 points behind Australia’s Courtney Atkinson. It sets up a direct battle in San Diego, where Atkinson and Whitfield are both on the start list, but Pereira could get even further ahead of both of them as he’s down to race in the Huatulco World Cup before the world series event in triathlon’s birthplace. In the men’s Ishigaki race, David Hauss’s win did little to change the overall men’s rankings and he’s already qualified for London, but it meant plenty to the first time World Cup medallists behind him. Davide Uccellari moved up 21 spots on the Olympic points list to put Italy in with a chance to send two men to London with compatriot Alessandro Fabian is already high up the list. Gonzalo Raul Tellechea moved up 20 places to put Argentina in the picture. So far he is Argentina’s only man in the Olympic simulation. Both are on the start list for the next ITU World Cup event, in Huatulco, where another good result could help them stay there. Other interesting results include Tyler Butterfield‘s seventh place in Ishigaki, which puts Bermuda just on the inside edge of the Olympic field at the moment.

The points battle enters its final month at the 2012 Huatulco ITU World Cup, before the penultimate round of the World Triathlon Series that counts in the Olympic qualification, San Diego. Huatulco, San Diego and Madrid are the three major events still to come before the May 31st cut off for Olympic Qualification.