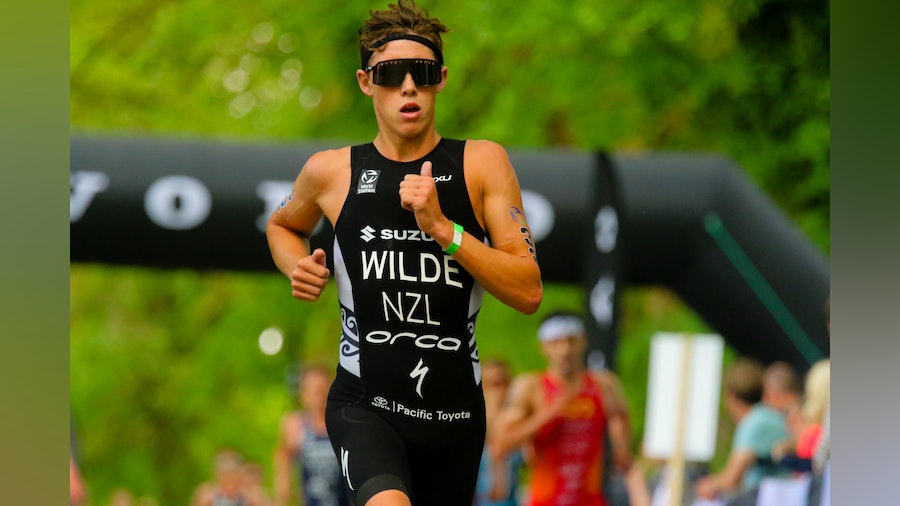 For anyone that has seen him in action over the past few years, it is clear that New Zealand’s Hayden Wilde is a man who relishes racing. A big fan of Richard Murray‘s ‘aggressive style’, an equally dogged competitor and with a deep love for the sport he transitioned to just five years ago, almost two years away from the blue carpet wasn’t easy for a 23-year-old hitting his stride but at the same time still finding his feet. In typical style, Wilde focussed on the positives, working on the swim that had been his self-confessed weakness and producing a spirited return when he bagged his highest WTCS finish in June with 5th in Leeds.

“The goal for me the last two years out has been the swimming and to be 30 seconds off the front group when i’m normally a minute behind was great,” said Wilde after WTCS Leeds.

“Ive always been a bit nervous pre-swim because it hasn’t been my strength but the improvements i’ve already made in just a few years show I’m heading in the right direction. I need to not overthink it, so I just tell myself I’m good enough to be there and focus on the positives and what I can control. (WTCS Leeds) felt really good until the last lap hit me and I started blowing up, but it was good to back and I can’t wait for the next hit out.”

That next hit out is, of course, the Tokyo 2020 Olympic Games and Wilde will return to the Odaiba Bay course where he produced a brilliant bronze at the 2019 Test Event. He revealed last year that there was still a part of him that couldn’t quite believe he would be lining up for his Games debut so soon. A relative latecomer to the sport, it was only after Rio 2016 that he got the Olympic bug and finally made the switch.

“I started triathlon late but it was as I watched the Rio 2016 Games when I was still competing in XTERRA, I knew that was what I wanted to do and was how I could reach the Olympic Games. So I took the gamble and hit the road to try and hit Tokyo 2020 but I didn’t think id be here now, I was thinking about Paris really.”

With a team behind him that included a former Olympic champion and accustomed to the humidity, the Test Event could hardly have gone much better for Wilde and will provide further fuel to his fire ahead of the men’s individual race on 27 July.

“The opportunity to race in Tokyo was amazing, I just went for it as hard as I could. I knew there were 6-7 guys behind us and me and the guys I was with (Tyler Mislawchuk and Casper Stornes) started working well together for the second 5km to avoid getting into a sprint with all of them. I knew it was a test event so if I blew up, I blew up, but having Hamish Carter - a gold medal triathlete - as my bottle boy was a pretty good feeling!”

New Zealand triathlon’s haul at the 2004 Athens Games with Carter and Bevan Docherty winning gold and silver respectively was an incredible achievement for such a relatively small population. It set the bar high and whetted the appetite for more success. Wilde is part of a new generation looking to take that on, as the Mixed Relay squad proved by winning the U23/Jr World Championships in Lausanne.

“It’s full throttle for 30 minutes and it shows that triathlon is a lot more than an individual sport and it will be cool to see it happen in Tokyo. We’ve got such a young team lining up and winning WTCS Edmonton and the World Champs has shown we’re a threat for the medals in Tokyo. We have amazing swimmers and runners on the team and know how to use our strengths and weaknesses - I think we’re technically aware and execute well.”

As for his dream team for the Mixed Relay? There’s a solid dose of experience, power, loyalty and self-confidence across the four legs.

“In the ultimate team I would have to have Katie Zaferes first, so dominant across all three disciplines, Vincent Luis in second, someone like Nicole van der Kaay in third who is so consistent in all three elements and put us in a great winning position in Edmonton and for the fourth I’d have to back myself. I’ve shown I can do well in the last leg and I really like the thrill of being the chaser or getting chased!”

Wilde will have two huge races ahead of him, then, but regardless of the outcome of both, it is hard not to get the feeling he will take the result in his stride and look forward to the next race just as much as his last.

“For me, success is defined by enjoyment. If you’re not enjoying the sport you’re not succeeding. You might not have a great race but if you still come away and can continue to fuel the fire then that’s the key. Consistency is so hard to find in triathlon, so as long as i’m learning something from a race and executing that in the next, that’s what I’d consider success.”