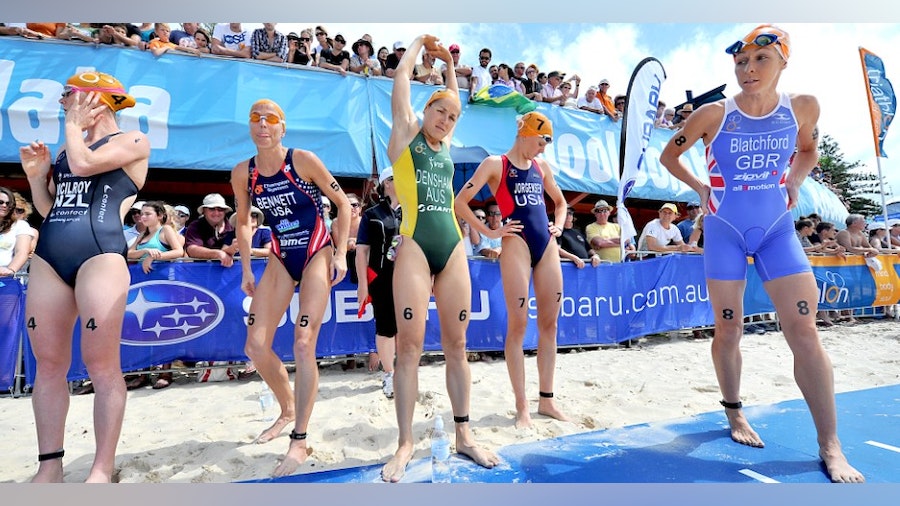 In the home straight of the London 2012 Olympics Qualifying period, which officially closes on May 31st, we’ll take a look at the Olympics simulator after every major race. By taking the current qualification information, that tells you how many athletes each NOC can send if Olympic qualification ended today, it can help show how each event shapes the Olympic field. This week it’s a chance to look into the 2012 Mooloolaba ITU Triathlon World Cup and what it meant for the London start line.

Men’s Olympic Qualification
France’s Laurent Vidal took his first World Cup win with a dramatic three-way sprint to the line and helped to further secure France’s three spots in London. It’s a story that can be said of all the men’s medallists, Vidal, Brad Kahlefeldt and David Hauss all have high rankings, which helps secure their respective National Olympic Committee at least one place. Each of the three have also secured their individual Olympic selection, Vidal and Hauss last year in London and Kahlefeldt has been nominated for pre-selection by Triathlon Australia. But past the podium is where it gets interesting in Mooloolaba, in particular for those countries on the edge of qualifying three places. In those terms the most important result was Canada’s Kyle Jones 8th place. That motored himself up the Olympic qualification list, before Mooloolaba Jones was sitting at #41, but now sits at #33 and has moved into the No.1 place for Canada. Where a country’s third athlete sits on the list determines if they can qualify three spots and Jones upward move meant Simon Whitfield was in third, and that Canada edged ahead of Portugal and Russia and are now sitting 7th on the list of NOCs to qualify three spots. Portugal were pushed down to eighth, and Russia to ninth – which means right now, they only get two Olympic spots. It sets up an important battle in Sydney, with Russia’s third man Ivan Vasiliev aiming to overtake either Portugal’s Joao Pereira or one of Canada’s trio of Jones, Brent McMahon and Whitfield (who are close together at the list as #33, #35 and #36) to put Russia back in. Vasiliev is currently just 126 rankings points behind Whitfield, or the different between 10th and 15th place in Sydney, and 89 points behind Pereira, the difference between 20th and 29th.

The other slight changes from Mooloolaba were that given the absence of New Zealand’s top three men, Kris Gemmell, Bevan Docherty and Ryan Sissons, the New Zealand men dropped two places – from fourth to sixth – while Spain and Australia moved up. Spain’s Jose Miguel Perez finished 16th, and Courtney Atkinson 33rd, and this was enough to put their countries in fourth and fifth overall.  Mario Mola’s and Sebastian Rank’s top-10 finishes were also important, while they are the fourth men for their respective NOC currently on the list – their high rankings means their countries are tightening their grip on three spots. Their results were also interesting for their individual selection, Mola is currently the fourth Spanish man and Rank the fourth German. Jan Frodeno and Steffen Justus have already qualified their spots thanks to top-8 results in London last year, but it could be close between Rank and Maik Petzold - who finished 10th in Mooloolaba - for who gets that third spot. Mola is also mixing things up for Spain’s selectors, who already have Javier Gomez, Ivan Rana and Miguel Perez ranked high.

The event that could have the most bearing on the men’s Olympic field in the next few months is the 2012 Eilat ETU European Triathlon Championships. With Great Britain not sending Alistair Brownlee to defend his title, or Jonathan Brownlee or William Clarke, Great Britain could lose their guaranteed continential championship spot. While this will not affect Great Britain’s chances to field three men in London – courtesy of the Brownlee’s podium places in London and Clarke’s high ranking they have that wrapped up – but it opens up plenty of interesting possibilities for the other countries to claim that guaranteed spot.

Women’s Olympic Qualification
While Australia have almost secured their three spots in London, Erin Densham’s win certainly did Australia’s overall and her own selection chances no harm. As Emma Moffatt has been pre-selected, the rest of the team will come from either reigning Olympic champion Emma Snowsill,Emma Jackson, Ashleigh Gentle, Felicity Abram and Densham, who devastated the field in Mooloolaba. In terms of the other podium places, Switzerland’s Nicola Spirig moved herself further up the rankings and also secured her own place in London. Spirig finished in the top-10 in London last year and therefore just needed a top-5 result in a World Cup or top-15 in a World Series event early in 2012 to confirm that. The focus before the race was on Switzerland’s third woman, Daniela Ryf, and whether or not she could push her NOC up into a position to qualify three spots.  Her sixth place finish was enough to do just that and put her above Germany’s Kathrin Muller and allocate the Swiss women three places – for now. It sets up a direct battle between Ryf and Muller in Sydney, as Ryf is just 37 points ahead of Muller, or the difference between 15th and 17th place. Andrea Hewitt‘s third place didn’t change New Zealand’s or her simulation at all, but meant that she is the No.1 athlete on the qualification list by almost 1000 points, ahead of Helen Jenkins.

In other results, Liz Blatchford (GBR) and Laura Bennett (USA) both put themselves firmly in their selectors’ frame. The Great Britain women’s team has only filled one place so far, that of 2011 World Champion Jenkins, and Blatchford’s Mooloolaba result means she would certainly be in the mix alongside Vicky Holland, who finished 13th in Mooloolaba, and Jodie Stimpson, who had to withdraw due to illness. Blatchford’s result also pushed Great Britain up from sixth in the list of NOCs to qualify three spots to fourth, pushing France and Spain down a place respectively. In the USA women’s team, Bennett is fighting with the likes of Sarah Haskins for the last American spot. Team ITU’s Mateja Simic also had a good outcome, her 26th place moved her up to #59 on the qualification list, which means if the field was selected tomorrow she would be Slovenia’s first Olympic triathlete.