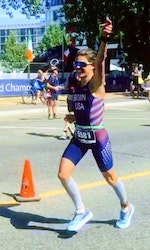 I’ve never been much of an athlete, but moved to Chicago after college and got into running.  I started out running a mile, then two and worked my way up. I always said running a marathon was silly, but after watching my best friend run the Chicago marathon in 2007, I was immediately intrigued. I signed up for the race the following year, ran a few more after that, but after so many miles of pounding the pavement, I kept getting injured.  I had a few friends who raced triathlons and was always interested, so I decided to buy a bike and explore the sport.  I signed up for a long-stance race and after racing was hooked.  I had so much to learn, but loved the challenge and being pushed out of my comfort zone.

My favorite part about the sport has been the people I’ve met along the way.  I’ve traveled to races solo and always leave with new friends from all over the world. Training has also allowed me to meet so many incredible people and makes long hours on the bike a lot more enjoyable!  It’s such a fun and welcoming community.

I also love that the sport of triathlon pushes me above anything I thought possible both physically and mentally.  Every time I lace up my shoes to run, pump my tires to bike or put on a swim cap to swim, I thank God for allowing me to do what I love.

I love being able to compete in a sport with so many variables and ways to improve.  With all the training that goes into racing, I always feel so blessed to toe the line.  To see all the hours of training pay off, it’s rewarding not just physically, but mentally and spiritually as well. 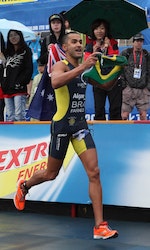 I got involved with the triathlon initially because I wanted to challenge myself, find out what I really was capable of and how far my willpower could lead me. With each training session, I was realizing that I could go even further and faster. Gradually I was evolving and gaining confidence because of my physical ability, so I started to participate in different types of competitions, running, cycling, duathlons in addition to the triathlons.

Good results began to emerge and dreams and ambitions were growing more, until I managed to qualify and achieve the dream of being for the first time in an ITU competition, which I consider to be the summit for every triathlete, because it is the best event, the most organized and most desired triathlon in the world. My debut in ITU races was at the WTS Grand Final Gold Coast in 2009. To be honest, I had no idea what to expect from my performance against the best in the world in my first world-class competition, but I was surprised by the placing 4th place and was the best athlete of Brazil in my age-group.

After that race, I dreamed bigger, to be world champion. That dream was realized in 2011 when I won the WTS Grand Final in Beijing. It was then impossible to stop there, so since that first experience, I have competed in seven ITU Grand Finals and I am proud to say that in all I have achieved the feat of being the best athlete in my country, in some of them the best of my continent and in one of these in particular the best of the world in my age-group.
Triathlon has become part of my life and my history, I adopted this lifestyle for 11 years and I do not regret any moment of the day that I decided to go in search of so many dreams that become real.
The best of all is that there is no end, because every season that passes, I still dream of stepping on the blue carpet again, because it is exactly where I experienced the best sensations and emotions I have ever experienced in my “Tri-life.” 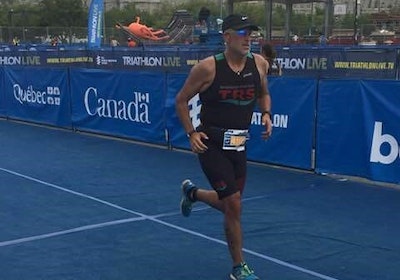 “Being a World Triathlete is challenging because the races are a challenge for me to overcome and fulfill, as an athlete. However, it’s a challenge that I love and that gives me even more desire to continue my adventure in the world of triathlon.” 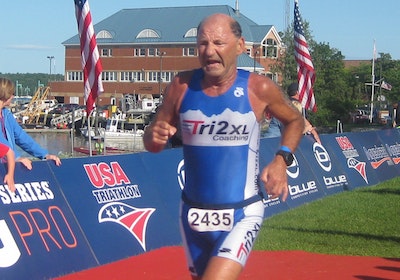 Having the heart of a champion takes on a whole new meaning when you are dealing with a heart condition. At 74-years old, Kenneth Lewis knows that to be true after being diagnosed with congestive heart failure. However, despite a prognosis that would leave most people feeling limited…

On Wednesday, the World Triathlon Executive Board met with the Women’s Committee, via a virtual meeting…
Andorra welcomed more than 200 athletes to the start line to compete in the World Triathlon Winter…
Rabaa Al Hajeri has been involved in the sport of triathlon in Kuwait for over a decade, as an athlete and…
© World Triathlon