She was silver four years ago at the 2007 Rio Pan Am Games but this year Sarah Haskins stepped up to gold at the 16th Pan American Games in Puerto Vallarta, Mexico.  With a devastating swim-bike combo with teammate Sara McLarty, Haskins comfortably won by almost a three-minute margin.

“It’s just an awesome way to end the season,” said Haskins. “I’m just so happy with my season, to be injury-free and just to be out there and feeling good.”

Barbara Riveros Diaz staged an amazing comeback in the run to secure Chile’s first ever triathlon medal at the Pan Am Games.  After cycling in the lead group the entire race, Pamela Nascimento Oliveira managed to hang on for the bronze.

The elite women arrived at the race site in the early morning darkness but the sun rose just as they finished setting up in transition and tested out the waters in swim warm-up.

McLarty and Haskins set the pace almost immediately in the 2-lap 1.5km swim as the small field of 29 women began to spread out early on.

The American duo, along with Oliveira, exited the water with a minute lead on the next closest athlete, Claudia Rivas of Mexico.  It was another 23 seconds before Brazil’s Flavia Fernandes was the next athlete to emerge from the water.  She was followed closely by Gwen Jorgensen of the U.S. and Bermuda’s Flora Duffy. Pre-race favourite Riveros Diaz had a poor swim and was almost two minutes down, along with Canada’s Kathy Tremblay, Melissa Rios of Puerto Rico and Elizabeth Bravo of Ecuador.

Meanwhile, McLarty and Haskins hammered ahead and transformed what was a one-minute lead, to almost four minutes by the end of the 40km bike.

Rivas fell back to the chase pack which also included Duffy, Jorgensen, Fernandes and Anahi Leon of Mexico.  The second chase group that included Riveros Diaz and Tremblay was also losing time to the leaders but at least was making up ground on the pack in front of them.

“It was a very hard race.  I knew I had to fight like a tiger on the bike and it was pretty hard to stimulate the girls because they all wanted to save their legs but I think they didn’t understand the race is in the front, it’s not where we are,” said Riveros Diaz, who credited her Chilean teammate Favia Diaz for putting a lot of work on the bike.  That helped their group successfully bridge up to the main chase pack, giving Riveros Diaz a glint of hope for the podium.

Up ahead, McLarty, Haskins and Oliveira came off the bike with a sizeable lead of almost four minutes but with stellar runners like Jorgensen and Riveros Diaz behind them, the podium positions were still in question.

By the end of the first of three run laps, Haskins opened up a 55-second lead on Oliveira while McLarty faded further back.  Riveros Diaz and Tremblay were running side-by-side, both down by 3:40 to Haskins.

Jorgensen was running in sixth place, about four minutes behind her American teammate.

As they came around for the bell lap, Haskins stretched her lead over Oliveira to almost two minutes and looked to have the victory sealed.  While Riveros Diaz and Tremblay moved up in a battle for the final podium spot.

Haskins came down the finish chute to the cheers of the crowd and lifted the finish tape at 1 hour, 57 minutes and 37 seconds as the new Pan Am Games gold medallist.

“The swim was probably the hardest part, it was really hot in there,” said Haskins. “Our goal was to work together as a team and we had many different scenarios on how to pull it together and I’m just so happy it worked, most especially for our Team USA over my individual gold.”

As Haskins celebrated at the finish area, the battle for silver and bronze heated up in the final lap of the run.  The Chilean tiger Riveros Diaz refused back down and eventually passed Oliveira to complete a furious rally for the silver medal with the day’s fastest run split.  She was the only woman to run sub-36:00 on a blistering hot day.

“The thing is, you have to have the spirit to keep fighting until the end,” said Riveros Diaz, who made up 1:40 in the final lap to secure silver.  “What a lot of people might think is impossible, you have to put in your mind and say ‘come on, it could be possible’ so it’s a great thing and I’m happy.”

Oliveira hung on for the bronze, crossing the line elated to have a spot on the podium.  She became just the second Brazilian woman to win a medal at the Pan Am Games triathlon, after Carla Moreno won silver in 1999.

Jorgesen recorded the second-fastest run split to finish in fourth place while Tremblay rounded out the top-5.  Rivas was the top Mexican in sixth place. 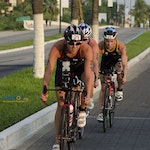 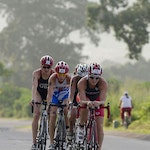 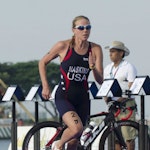 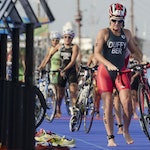 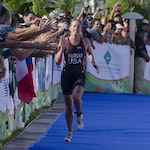 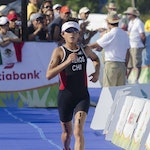 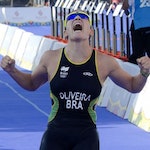 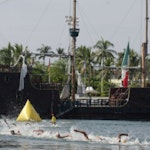 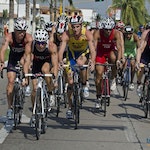 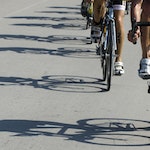 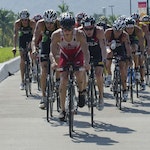 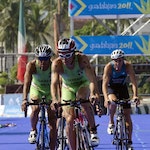