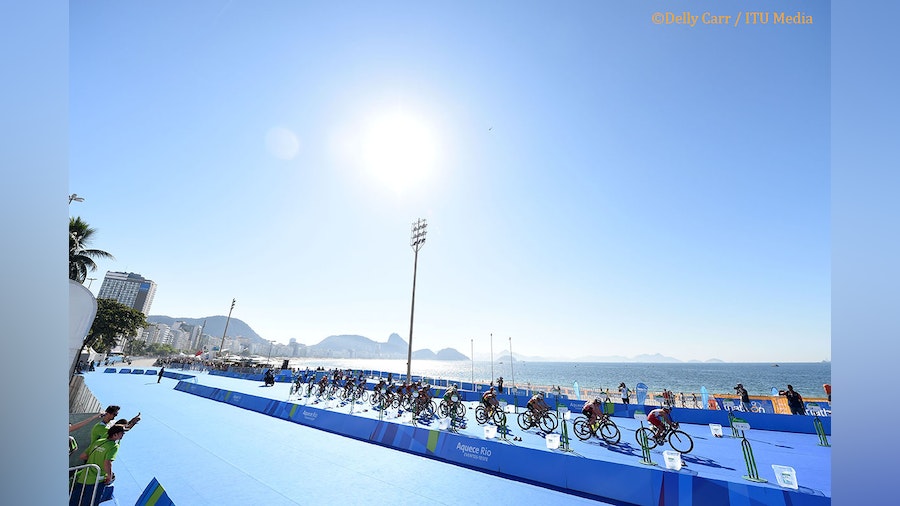 A beach swim start at Copacabana, followed by the hilly and technical bike course, and a fast, flat run course lends itself to triathletes skilled in all three legs. Here is how some of the scenarios could play out in the women’s triathlon event at the Rio 2016 Olympic Games.

Swim:
It’s a saying that many a triathlete has heard: you can’t win the race in the swim, but you can lose it. What makes the Olympic race interesting is that so far that statement hasn’t really held true, particularly in the women’s events. In Athens Kate Allen was 121 seconds behind after the swim leg, and in London Nicola Spirig was 67 seconds behind. Both ended up with a Gold medal. However, the difference in Rio is that a decent swim-bike breakaway is the best chance for others to get ahead of Gwen Jorgensen (USA). A new element in the swim for this edition is the beach start, the first time in Olympic history that athletes will hit the water from the beach rather than a pontoon. While Jorgensen was almost mid-pack in last year’s test event, she was only 14 seconds behind in time, ultimately not anywhere near enough time to stop her running through the field. The rest of the world will be watching to see where the reigning World Champion will finish the first leg.

Thought it’s difficult to make comparison between courses, particularly in the swim with different conditions and start types, the fastest swim at a Games so far has been Lucy Hall (GBR)’s 18:16 in London. The fastest non-wetsuit time was 18:37, set by Loretta Harrop (AUS) and Sheila Taormina (USA) in Athens. Rio is expected to be a non-wetsuit swim.

Bike:
World Triathlon Series results from the past two seasons suggest that the best way to beat Gwen Jorgensen has been to get away on the second leg, and stay there. With some of the best cyclists in the field also excellent swimmers, expect a lead group to form from T1 and push early. But what is also interesting is that it might not even need to come immediately after the swim. Helen Jenkins (GBR) and Flora Duffy (BER) ended Jorgensen’s 12-race WTS winning streak on Australia’s Gold Coast this year through a bike breakaway, but they made that decisive move halfway through the 40km leg. Duffy has never been afraid to make a breakaway on the bike, but in 2016 she has turned it into a race-winning advantage, picking up her first title in Stockholm. And Jenkins also knows how to make a breakaway stick on a big race, it’s how she won her first world title in 2008.

Add in women like Stanford, True, Oliveira and Moffatt – who are likely to be leading the swim and who are all capable of pushing the pace on the technical and hilly bike course, and this could shape up to be the race-defining leg.

In the test event last year it was Chilean pocket-rocket Barbara Riveros who perfectly maneuvered her way around the course to the fastest time of 1:03:28. But there was a host of other women who also recorded fast splits, including Germany’s Anne Haug, the Netherlands Rachel Klamer, New Zealand’s Andrea Hewitt, Ireland’s Aileen Reid and Japan’s Yuka Sato. Also keep an eye on other strong cyclists like South Africa’s Marie Rabie, Great Britain’s Vicky Holland and kirsten_sweetland’>Non Stanford{/exp:tag_this], Canada’s Kirsten Sweetland and Sweden’s Lisa Norden, the reigning Olympic silver medallist. What does have the potential to change this race though is the presence of reigning Olympic champion Nicola Spirig (SUI). Known as one of the strongest cyclists seen in triathlon, Spirig’s ability to make up a 30 or 40-second deficit from the swim in minimal time is second to none. But Spirig isn’t just likely to pull herself up, but plenty of others who manage to stick to her wheel. Spirig already lays claim to the fastest bike leg in Olympic triathlon history, with 1:03:54 in Beijing, that helped to propel her into sixth spot. The Rio course then puts Spirig herself right back into contention to take back-to-back Gold medals – a feat that has never been done in triathlon. But it also means that it could pull a whole host of other fast runners back into the medal frame.

Run:
There are likely to be two main possibilities to prepare for in this race. One is that a successful bike breakaway will see the run shape as an epic battle between the leaders and those attempting to run them down. The other is that the strong cyclists of the group will catch the leaders on the technical course and see most of the field enter T2 at the same time, leading to flat out foot race in the final 10km. Wherever she ends up in the field, all eyes will be on Jorgensen in this leg. Many of her World Triathlon wins came when she ran through the field, negative splitting the 10km distance. While she will be chasing gold, also keep an eye on the clock. Emma Snowsill’s 33:16 in Beijing is currently the fastest run leg in the women’s event at an Olympic Games. While it’s difficult to make comparisons across different courses, and Jorgensen recorded 33:57 in the Rio test event last year, the Games can produce surprising results.

Although Jorgensen is hard to beat on a head-to-head basis, there are others that could potentially push her, including her own American teammates.Katie Zaferes was also plucked from the same college recruitment program as Jorgensen, and burst onto the World Triathlon scene in 2013. In 2015 she recorded five consecutive WTS podium places, and after a few months without a medal, recorded a 16:17 to win the sprint event in Hamburg last month. The third American woman on the team also shouldn’t be discounted, particularly as Sarah True (USA) finished fourth at the London 2012 Olympic Games and fourth in the Rio test event in 2015. Those who watched the London race will remember her impressive comeback, after initially being dropped from the leaders she surged back into contention.

Also in the category of those who can challenge Jorgensen include Stanford, who has a background in running and has been mentored by Great Britain’s Dame Kelly Holmes, a multiple Olympic Gold medallist on the track. Stanford and teammate Vicky Holland went 2-3 on the podium in the test event last year.

Australia has always won a medal in the women’s triathlon event at the Olympics, and Ashleigh Gentle is the speediest of the bunch currently. Gentle has recorded multiple World Triathlon Series podium places this year and recorded the second-fastest split in both Yokohama and Abu Dhabi, as was the fastest runner in the field in the Montreal World Cup event just last week.