Preview: Kitzbühel prepares for a showdown 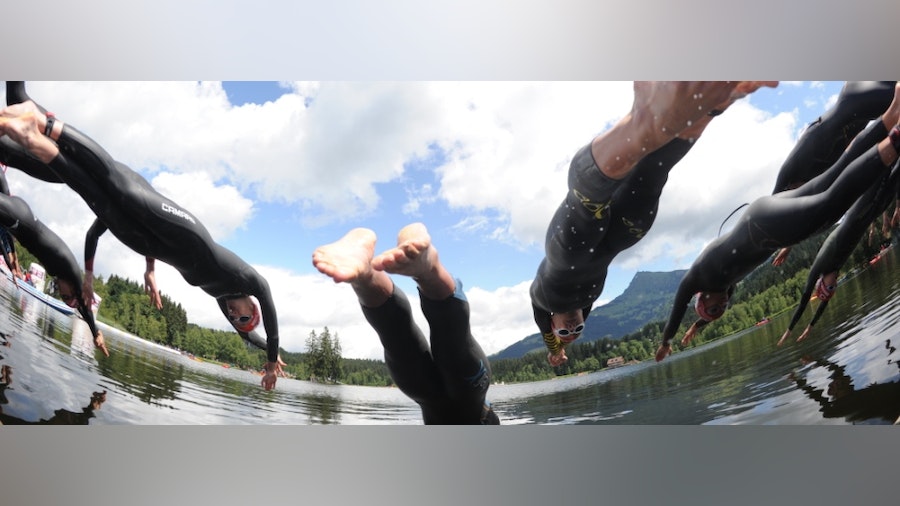 The 2012 ITU World Triathlon Kitzbühel promises a nail biting weekend of racing. The women begin with Andrea Hewitt (NZL) up against the likes of Switzerland’s Nicola Spirig, Aileen Morrison (IRL) and Barbara Riveros Diaz (CHI). The men’s race certainly sees the strongest line up of the year with both Alistair and Jonathan Brownlee (GBR), Javier Gomez (ESP) and Alexander Bryukhankov (RUS) going head to head for the first time in 2012.

The magnificent Alpine landscape provides the location for the fourth round of the 2012 World Triathlon Series where athletes will begin with a dive into Schwarzsee lake for a two lap swim. The challenging bike course bends and climbs up to the Lebenberg and through the centre of Kitzbühel before a fast virtually flat run.

Elite Women’s Preview
Hewitt enters her third WTS of the year straight off the back of Banyoles World Cup where she finished fourth. After her bronze in Sydney, a medal this weekend will be Hewitt’s fifth in Kitzbühel.  Switzerland’s Nicola Spirig has won her past two races, taking the most recent WTS in Madrid for the second year running and regaining her European Championship title in Eilat. Spirig has also finished on the podium in Kitzbühel before, claiming silver in 2009 and winning in 2008. Barbara Riveros Diaz proved that her Olympic preparation is heading in the right direction with bronze in Madrid last month, along with Morrison whose silvers in Madrid and Ishigaki 2012 World Cup produced the best ever international results by an Irish triathlete.

Gwen Jorgensen and Sarah Groff, representing USA at London 2012 will both appear in Kitzbühel. Jorgensen enters the race straight off a victory at the Banyoles World Cup and also came fourth in Sydney WTS this year. She gained Olympic selection last year with an impressive display in London last year on the 2012 Olympic course finishing second. Groff climbed the ITU World Triathlon Series podium for the first time last year in Kitzbühel with bronze.

Of Jessica Harrison’s (FRA) four ITU races this year, she has finished in the unenviable fourth place three times. A podium finish in Kitzbühel would be Harrison’s second ever WTS medal after bronze in Madrid 2009.

Australia’s Ashleigh Gentle has shown good form in 2012, taking bronze in the Banyoles World Cup this past weekend and posting two top ten finishes in Sydney then San Diego. Japan’s Ai Ueda who took bronze at the 2012 Asian Championships will be in full Olympic preparation, but both Gentle and Ueda are yet to claim a WTS medal.

Lisa Norden{/exp:tag_this} (SWE) will also start in Kitzbühel hoping to improve on recent top twenty form. Norden has proved she is capable on this course with silver in 2010.

Other names to look out for are Vicky Holland (GBR), Alexandra Razarenova (RUS), New Zealand’s Kate McIlroy and Nicky Samuels and Austria’s strongest female in the line-up, Lisa Perterer.

Elite Men’s Preview
Reigning ITU World Champion Alistair Brownlee (GBR) enters his first ITU race this season after sustaining an Achilles tendon injury in February. Last year’s incredible four WTS golds led to his 2011 World Champion crown. Now, attention will focus on whether he is back to full race fitness to reclaim his Kitzbühel titles from 2009 and 2011 and ascertain his position on the road to London 2012.

Jonathan Brownlee joins his brother in Austria following his consecutive back-to-back victories in San Diego and Madrid. The Brownlees will aim to keep up their joint podium run, first standing together in Madrid 2011, they have shared the podium in every single ITU race they have both competed in since.

Gomez has kept a clean sheet in 2012, claiming the European Championship title in his only ITU race this year. He is also familiar with the Kitzbühel podium, taking silver on the two occasions he competed in the race, in 2009 and 2010.

A trio of fierce Russians are sure to hold presence in the race, led by current world number one Bryukhankov and including Dmitry Polyanskiy and Ivan Vasiliev. The three took second to fourth positions respectively in Madrid last month behind Jonathan Brownlee, drawing strength as a team.  Polyanskiy pocketed World Cup bronze in Banyoles this past weekend and Bryukhankov took silver in Kitzbühel last year.

Sven Riederer (SUI), who has already won silver in San Diego this year and bronze in Kitzbühel last year, is an ever present medal threat. Riederer was joined by reigning African Champion Richard Murray on the San Diego podium. The South African has been causing a stir on the world stage in 2012, also taking silver in Sydney.

Germany fields a group of triathletes with a proven track record. Jan Frodeno makes his first ITU appearance of the year and won bronze in Kitzbühel two years ago. Steffen Justus won his first WTS title in Sydney this year, which makes three medals in total.  The pair are joined by Maik Petzold.

Frenchmen Laurent Vidal and David Hauss have both enjoyed World Cup victories this year. Vidal had Kitzbühel in mind conserving his energy on the last push to take silver in Banyoles at the weekend and he also has a bronze from Sydney, his second WTS medal to date after winning bronze in Kitzbühel in 2009.

Junior world champion Lukas Verzbicas of the U.S. burst onto the elite circuit last week winning his debut ITU World Cup race in Banyoles. Intrigue surrounds how the nineteen-year-old will fare as he steps into his first ITU World Triathlon Series race.

Following a successful start to the season with silver in the opening Mooloolaba World Cup, Australia’s Brad Kahlefeldt was forced to take a break from training when he was diagnosed with pneumonia after San Diego. He joins the Kitzbühel starting line-up back to full Olympic preparation.