It might still technically be 2011, but the 2012 Dextro Energy Triathlon ITU World Championship Series kicks off in Yokohama this weekend.

The Yokohama round was originally scheduled for May, but postponed after the devastating earthquake that hit the region. But thanks to the work of the ITU, local organising committee and Japan Triathlon Union, the event was rescheduled and points will now count towards the 2012 series rankings.

Therefore, expect plenty of athletes keen to make a fresh start that choose to back-up after Beijing. Yokohama was part of the first Dextro Energy Triathlon ITU World Championship Series in 2009, with Jan Frodeno and Lisa Norden claiming their debut series wins there. The course is based around Yokohama’s beautiful harbour, with a two-lap 1.5km swim, an eight-lap 40km bike course and a four-lap 10km run.

Elite Women’s Preview
The stars of Beijing - new ITU World Champion Helen Jenkins and Grand Final winner Andrea Hewitt - are slated to race in Yokohama and both will be riding a wave of confidence after spectacular performances in Beijing. But after emptying the tank in the Grand Final, both also might have a let down after such a big weekend.  Another to watch is Norden, who won the first event here in 2009.  She’ll be racing for the third straight weekend and she’s just hit her best form this season, with an excellent fourth place in Beijing enough to move herself up to ninth overall in the 2011 season standings. Emma Jackson and Emma Moffatt also had strong races in Beijing, although both were caught in the chase pack on the bike, they recorded two of the three fastest run splits among the women to get into the top-12 and move up in the overall series rankings. Jackson was just 23 points off third, while Moffatt finished seventh.

But the big news on the women’s start list is that one of the most successful triathletes in ITU history is back: Vanessa Fernandes. The Olympic silver medallist who has 20 ITU World Cup titles to her name, announced she was taking a break at the start of this year.  But it appears now the Portuguese superstar is ready to come back to the sport she dominated in the years before the Beijing Olympic Games and the road to London 2012 for her begins this Monday in Yokohama.  A motivated, fit and hungry Fernandes would certainly shake up the top of women’s triathlon. Then there is the strong Japanese team at home, with Kiyomi Niwata, Mariko Adachi, Juri Ide, Ai Ueda and Tomoko Sakimoto, who rode with the leaders in the bike in Beijing, and Youth Olympic Games gold medallist Yuka Sato. Ide made the podium here in the first Yokohama race, behind Norden and Hewitt.

Also watch for Poland’s first ITU World Champion, Agnieszka Jerzyk, who won the Women’s Under23 title in Beijing last week and the woman who finished on the podium with her, Hungary’s Zsofia Kovacs. But also watch for Kate Roberts. The South African champion didn’t manage to reach her excellent 2010 form in the 2011 season, but she did race with the lead bike pack for five out of six laps in Beijing on the back of an excellent swim. She will be keen to start afresh.

Elite Men’s Preview
With the three ITU World Championship medallists, Alistair Brownlee, Jonathan Brownlee and Javier Gomez, sitting this one out it’s a perfect chance for others like Sven Riederer,,, Laurent Vidal, Brad Kahlefeldt and Russians Dmitry Polyansky and Alexander Brukhankov to get a head start on next year’s world title race.

Riederer claimed his best result of the season in Beijing, storming home to claim silver, while Vidal capped off a consistent year with another top-10 place and an overall finish of seventh in the 2011 series. Both Brukhankov and Polyansky have also been consistent in 2011, Brukhankov already has two series silver medals this year while Polyansky pulled out a sub-30 minute run in Beijing to finish fourth. Both finished in the top-10 season rankings, Bryukhankov fifth and Polyanksy eighth. But Kahlefeldt and the rest of the Australian team will be motivated in Yokohama, especially after a disappointing showing in Beijing. Brendan Sexton didn’t start due to illness, while Kahlefeldt didn’t finish. Both are on the Yokohama start list. Chris McCormack was the only Australian man to finish the Beijing Grand Final in 31st place and put in plenty of work on the bike to help the chase group gain time on the leaders.

Speaking of legendary veterans, also keep an eye on Simon Whitfield who claimed his best result of the season in Beijing with 13th and fellow two-time Olympic medallist Bevan Docherty. They haven’t made series podiums yet in 2011, but they can’t be discounted. 2007 World Champion Daniel Unger is also in the field, he didn’t finish either the European titles or Hamburg race, but after a break will have fresh legs. Also keep an eye on American and New Zealand men, neither have met the automatic qualifying criteria for their respective London 2012 Olympic’s teams, and if it comes down to discretion every result will be important.

The 2011 Dextro Energy Triathlon ITU World Championship Series Yokohama gets underway when the women’s race starts at 8.05am (local time) on Monday September 19, followed by the men’s race from 11.05am. Follow every movement live through Triathlon’s live video, timing and text updates, at www.triathlonlive.tv. Follow on Twitter at twitter.com/triathlonlive. 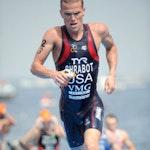