While the elite’s did work in Yokohama at the third stop of the World Triathlon Series, juniors took centre stage in Europe and the Americas this weekend. France cleaned up at the ETU Triathlon Junior European Cup, while Venezuela and Team ITU were well represented on the podium at the PATCO Junior Central American and Caribbean Championships.

2013 Vierzon ETU Triathlon Junior European Cup
Leonie Periault and Raphael Montoya stormed to victory to make it a French double celebration at the ETU European Junior Cup in Vierzon. In the Junior women’s race, Periault chose the perfect time to win the first race of her International career. A cautious swim, where she exited behind the leaders, was followed by a tactical bike race that left her in the best possible position to use her pace to stride home for victory. 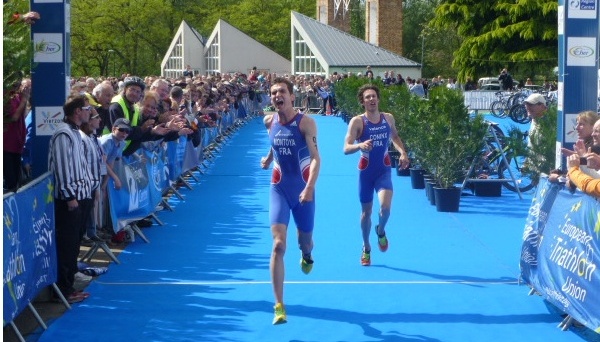 In the nunior men’s race, Raphael Montoya won his second European Cup of the season and once again it was a dramatic finish. On the final lap nothing could separate Montoya from his countryman Dorian Coninx with the two fighting it out for first and second. Just as in Quarteira, it was Montoya who took Gold right on the line, just a second ahead of his opponent. Click here for full results

2013 Juan Dolio PATCO Triathlon Pan American Cup and Central American and Caribbean Championships
Flavia Fernandes (BRA) positioned herself in the lead pack straight from the beginning with one of the top swims of the day in the women’s race. She held the top spot from line to line to claim the win in nearly a minute. Despite winning by such a large margin, Lisandra Hernandez (CUB) attempted to reel Fernandes in with a strong finish on the run for second. Although Debora Antillon (GUA) swam and biked with the best, she flatlined on the run for bronze.

US Olympian Manuel Huerta ran clear to the win in Juan Dolio ahead of American teammate Chris Lutz with the fastest run split of the day in the men’s race. Lutz hung with Huerta until the run, which was good enough to overtake Gerardo Vergara (GUA) for silver by nine seconds. Click here for elite men’s and women’s results.

2013 Juan Dolio PATCO Triathlon Junior Central American and Caribbean Championships
Steffy Mishel Salazar and Maria Cristina Farez Pucha, both competing under the Team ITU banner, swept first and second in the women’s junior races in Juan Dolio. In a three-way battle for the podium, it was Salazar who had conserved enough energy to unleash on the run, passing Farez Pucha and Brazil’s Fabiola Silva. Farez Pucha punched over just two seconds later for silver, while Silva rounded out the top three six seconds after her.

Venezuela cleaned up in the junior men’s race, with gold and bronze going to Leonel Gonzalez Araque and Jose Gabriel Solorzano. Ramón Armando Matute Alava, representing Team ITU, was sandwiched between the Venezuelans for second. Click here for junior results.

Meeting in Abu Dhabi on 22 November, the World Triathlon Executive Board has…
The International Olympic Committee (IOC) has awarded its Coaches Lifetime…
World Triathlon’s member National Federations came together in person for the…
more news →