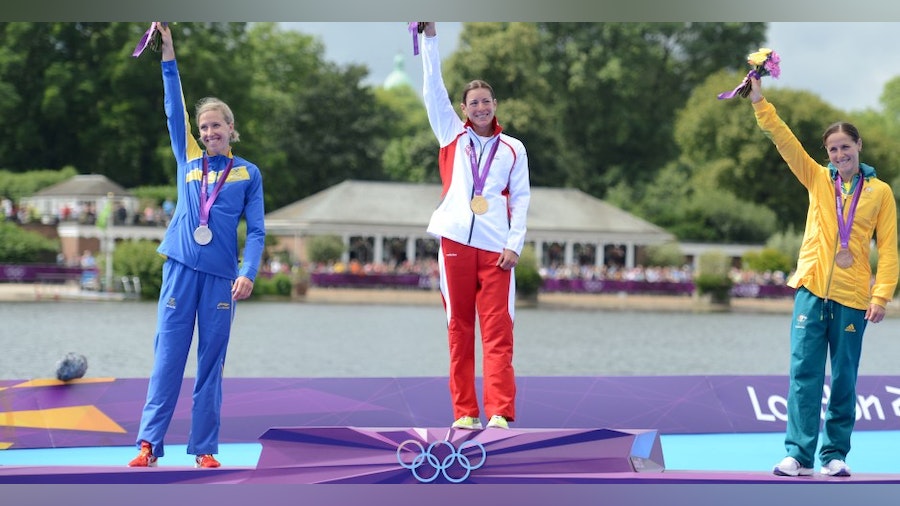 The women’s Olympic triathlon competition was met with grey skies, wetsuit temperature water, and a slick course that challenged athletes every step of the way. While the past three Olympic Games have seen surprise winners, London seemed to break the spell when three favorites made the podium.

“I had a feeling but I wasn’t really sure so I needed an official to tell me, and it took a few minutes and those minutes were really hard,” Spirig said. “I would have been happy to win a medal but of course it’s a big difference if you win gold or silver, so it’s just amazing, I’m a bit speechless.”

Watch a full replay of the race on YouTube

However, their medals were not always secure, given they all had more than a minute deficit exiting the 1.5km in The Serpentine. Dressed in wetsuits for the 19.6-degree water, five women immediately churned for the lead after the start of the swim, headed by the oldest Olympian on the course, 37-year old Laura Bennett (USA).

Rookie Olympian Lucy Hall (GBR) took over on the turn, leaving Claudia Rivas (MEX) to swim between them. Line Jensen (DEN) swam on their feet, creating a small gap, while the pack of nearly 50 women swam seconds back.

Just over midway through the swim, the amphibious Hall, Jensen, and Pamela Oliveira (BRA) swam single file to move a line of four more women into a sizeable lead over the chase pack. The remainder of the top seven included Rivas, Bennett, Jessica Harrison (FRA), and Mariko Adachi (JPN), while the rest trailed at a sizeable distance.

Hall left the lake first, followed by Jensen and Adachi. Harrison emerged in seventh 22 seconds later. With a minute advantage, the group quickly came together to carry their small pack onto the bike course. Behind them, the giant group scrambled to get out of their wetsuits and onto their bikes, led by two-time Olympian Norden.

Shortly into the first lap, Oliveira slid out on her bike while maneuvering around a corner, causing her to fall out of second place. Bennett managed to miss the crash, as did the other six leading women. Oliveira slowed to join the chase pack, which had already made up considerable space in the first lap. Unfortunately, the first lap was plagued by crashes on a course which was showered with rain late in the night. Most notably amongst those who hit the pavement was Emma Moffatt (AUS). The Beijing bronze medallist was forced to withdraw from the race after the crash, which also involved Italy’s Annamaria Mazzetti.

By the end of the first lap, Adachi rode through the transition area with the fastest swimmers, but not without heat from the chase group. Spain’s Ainhoa Murua, who swam in the pack of athletes, came charging through the first lap having made up 33 seconds. “I didn’t feel good in the swim and obviously I realised coming out of the water I was in a group with the main players, so that was a relief,” Densham said. “And then on the bike it was obviously about staying out of trouble, a couple of girls came down on the first lap and I got caught behind it but I managed to stay upright.”

After the third lap, the lead group had gained an advantage of nearly a minute and a half. Barbara Riveros Diaz (CHI) worked at the head of the chase group to pull up the group of 26 women. France’s Carole Peon and Emmie Charayron, as well as Anne Haug (GER) rode with Riveros Diaz.

However the powerful lead pack, which included a deep field of favorites, proved to be too fast, advancing another 16 seconds to increase their lead to 1 minute, 48 seconds. On the fourth lap, Svenja Bazlen (GER) led the group of 22, which spanned across just three seconds.

The group worked efficiently, signalling to one another for new lead changes throughout the narrow and twisting seven-lap course. With Spirig at the helm on the fifth lap, the ladies grinded ahead another 20 seconds for a 2 minute, 8 second advantage.

While Spirig often rode in the front of the peloton, other favourites like Hewitt, Densham, and Norden opted to ride in the middle, along with Murua, conserving energy to battle on the run. Hall also often led the group, as she did on the sixth lap, with ease and control in an attempt to thwart the competition from teammate Jenkins. Armed with more than a two-minute lead, the ladies backed off their pedals slightly, gearing up to transition into the four-lap 10km run.

Following the transition, that saw veteran German Anja Dittmer leave for the run course first, Great Britain’s Jenkins wasted no time moving herself to the front of the pack in front of a deafening crowd. With Olympic dreams on the line, a group of ten women started to break away from 22-person pack midway through the first lap of the run.

The group was led by Densham, Jenkins, Spirig, Norden and Murua, while Groff, Hewitt, Jackson, Harrison, Bennett, and Dittmer ran on their heels. The first nine competitors ran through the first lap within three seconds of each other, while Bennett sat seven seconds back to Dittmer’s ten. Jenkins pushed the pace on the second lap, dropping Harrison, Bennett and Dittmer, and leaving Aussie Jackson trailing to create a new lead group of seven women midway through the second lap of the run.

Groff and Murua also started to fall off late in the second lap, while Densham, Jenkins, Spirig, Norden, and Hewitt forged ahead. Shortly into the third lap on a winding technical portion of the run, a group of four broke away to leave Hewitt. Jenkins looked next to be picked off, as she found trouble staying with the speed.

Groff worked to keep the lead pack in her sight, and overtook Hewitt to move into fifth place. With one lap to go, she was just two seconds down, and quickly joined leaders Densham, Spirig, Jenkins, and Norden on the final lap. Densham stayed at the top, repeatedly attempting to peel herself away. But her every step was answered by the women, especially Groff who had moved into second place. Jenkins, meanwhile, began falling behind. A persistent game of cat and mouse, the only constant remained Densham at the top. Then on the final straight away, Spirig moved into first and began hammering ahead of Densham. Norden followed suit, and the two sprinted over the finish line to take down the finish line tape at nearly the same time. Spirig was crowned the winner with time of 1:59:48, while Norden, for the second time in her life, was named second in a photo finish.

“I did not have a clue, it was only in the last couple of strides that I came close to her and I did kind of think I had silver,” Norden said. “But there is just this little hope and you wait for the screen to come up. I saw I had the silver and I’m pretty pleased with that, put it that way.”

The finish was so close, officials had to review the two finish line cameras to determine the winner. Race referee Bela Varga determined Spirig had won by an estimated 15cm margin when her torso hit the tape first.

“I lost a sprint in Madrid some years ago to Andrea Hewitt by just 0.02 seconds and this was another one, I always just seem to be on the wrong side of these decimals, but hey I got a silver medal and I’m pretty stoked with that,” Norden said.

Densham secured bronze in 1:59.50 to give Australia its fifth triathlon medal in the Olympic history of the sport.

Groff, competing in her first Olympic Games, crossed over in fourth at 2:00.00. Cheered on by a roaring crowd, Jenkins finished in fifth at 2:00.19. Hewitt improved her Olympic showing by two places for a sixth-place finish. Murua finished in seventh for a dramatic improvement from her previous two Olympic, followed by Emma Jackson in eighth. Harrison and Kate McIlroy (NZL) rounded out the top ten in night and tenth, respectively.

The men’s triathlon competition gets underway Tuesday 7 August at 11:30am local time. Check listing with your national Olympic broadcast company for broadcast times near you. While live timing and streaming are not available, tune in to triathlon.org/live and on Twitter for live text updates, via @ITUonline and @triathlonlive.