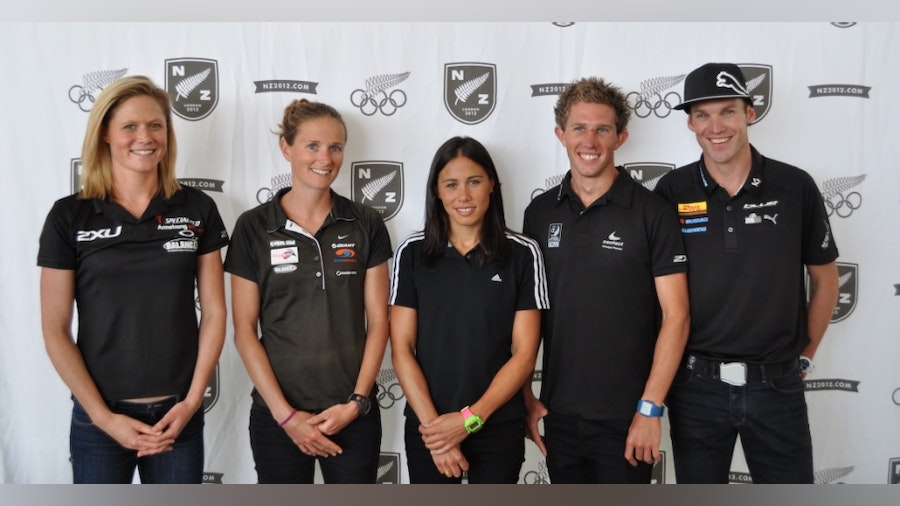 It was delight all around as Triathlon New Zealand and the NZOC confirmed the New Zealand team for the London Olympic Games at a function in Auckland on Wednesday afternoon.

Dave Currie made the announcement on behalf of the NZOC, confirming Andrea Hewitt, Kate McIlroy, Nicky Samuels, Kris Gemmell, Bevan Docherty and Ryan Sissons in the team for London.

Samuels and Sissons may have a slightly nervous wait however as New Zealand must finish inside the top 8 nations on the ITU Olympic rankings at the end of May for New Zealand to have three spots in either men’s or women’s races in London. In both cases New Zealand is comfortably inside the top 8 and has plans to contest key races in May to ensure they stay there.

Triathlon New Zealand has also confirmed that Debbie Tanner and Clark Ellice have been named as reserves in the event of injury or illness in the lead up to London.

Below are bios and reactions from each of the athletes heading to the London Olympics;

London will be Andrea’s second Olympic Games, after coming in 8th place in Beijing 2008. She picked up a bronze at the Melbourne 2006 Commonwealth Games. Her career started when she was crowned the 2005 Under23 World Champion in Gamagori, Japan. In 2007 she won her first ITU World Cup race in. In 2011, Hewitt won the ITU World Championship Series Grand Final in Beijing, China and placed second in the overall championship rankings. In the 2012 ITU World Triathlon Series Andrea is ranked first heading into the Olympic Games.

“Qualifying early for the Games has been a huge help for me and allowed me to concentrate on peaking at the right time of the year. My form at the moment is great considering I have not yet done any of the speed work that will be crucial in London. While it is some time since my nomination was confirmed to the NZOC, the naming of the team today is a very proud moment for me, my coach Laurent and my family.”

Kate McIlroy is a former World Mountain Running Champion and steeplechaser who qualified for Beijing on the track but was forced to withdraw with injury. Named Sportswoman of the Year in 2005, since turning her attention to triathlon in late 2008 McIlroy has made every post a winner, taking out her first ITU World Cup title in 2009 and finishing 6th at the World Championship Grand Final in Beijing in 2011, ending the year with a world ranking of 17.

“I am excited and proud to be named in the NZ Olympic Team; it is by far the highlight of my sporting career so far. Everything was on the line in Sydney; I finished with mixed emotions knowing I would have to wait a few days for the selectors to decide. The quality of the other NZ girls is world class, so I realise it has been a tough decision to narrow it down to the last two spots. It’s a massive relief to be named, now I can look forward to the next few months with a clear head and plan how I am going to get myself on the podium in London.

“It has been my lifelong goal to compete in the Olympic Games. I watched the 2008 Olympic triathlon on TV and thought ‘this is a sport I could be good at’. I had the running legs; I just needed to learn the other two disciplines.  At that stage I had never ridden a bike, so to get from that point to now be in the New Zealand team makes selection that little bit more rewarding and satisfying. My journey to get here has not been easy and it has been different to most but I have a great team around me, Greg Fraine has transformed me from a pure runner to a triathlete while Tim Brazier has taught me the art of swimming ‘ITU style’.

“I am confident with where I am at now and will be working full steam ahead to get myself into a position where I will be a realistic medal chance for London. I have met my goals of learning the sport, making the Tri NZ squads and now the Olympic Games. Now my focus is to win a medal.”

Samuels is a fierce competitor and renowned as one of the leading cyclists on the triathlon circuit. Indeed Samuels is the current NZ National Road Champion, upsetting the full-time cyclists in early 2012 to earn the title. She won her first ITU World Cup race at Mooloolaba in 2011 and has overcome serious heart issues to continue racing, with two bouts of surgery in the past seven months.

“I have worked hard for this over the past three years with Coach Mark Elliott. If it had been handed to me on a plate it wouldn’t mean as much as it does. To go through two heart surgeries within six and a half months and come out the other side with Olympic Selection - the result I wanted, this is just perfect.

“I went into the race in Sydney knowing that my heart problems were now under control, my running was at the best it has been for four years, my fitness was at an ideal level for this time of year and I had nailed most of my key sessions with times all around what I was aiming for so I knew I was at my best coming into the race. I was aiming for that top 8 and automatic selection.

“I didn’t make the top 8 so I was naturally a little disappointed but I knew I performed really well so I was still happy with my result. I feel it was this result that confirmed my selection. The most exciting part is this selection and good race result comes just two and a half months after my last heart surgery so I know I have time to get more fitness gains especially much more from my running by London.

“Competing at the Olympics is something you dream of when you are a little kid. I was one of those kids who as an 11 year old wrote my goal on a piece of paper for school and one of them was “go to the Olympics”. I remember getting laughed at by one of my friends in my class and changing it on that piece of paper but definitely not in my heart. I am really proud to represent my country every year in triathlon around the world and the Olympics is the pinnacle event for the sporting community and to go there means a lot to us as athletes.

“I have achieved my goal of selection but let’s not stop here, you don’t want to be just selected for the Olympics and just go, you want to go with pride, knowing that you are the best person for the “job”, in the best shape of your life and can get the best result you are capable of. While the Olympics is the goal, the Olympic Gold medal is the ultimate goal.”

Bevan was part of New Zealand’s proud gold-silver moment at Athens 2004, when he took silver just seconds behind below Kiwi, Hamish Carter. In Beijing in 2008 Bevan came away with the bronze medal. London will be his third Olympic Games. Bevan also won a silver medal at the Melbourne Commonwealth Games and is one of the most decorated triathletes in the history of the sport.

“I have been focused on London for some time. After winning bronze in Beijing to go with my silver from Athens I made it clear the only thing missing was the gold to go with the collection. I have not wavered from that thought; that is my goal, to go to London and win gold. I am as excited about this opportunity as any in my career. They key for me now is to continue my preparation and peak on the right day to be at my best.”

Kris booked his space for the London Games in Sydney this past weekend with his top-8 finish. Kris competed in the 2002 Manchester and 2006 Melbourne Commonwealth Games. He was sixth at Manchester and fifth in Melbourne, where he finished just ahead of countryman Hamish Carter. London 2012 will be his second Olympic Games. In Beijing 2008 Kris came 39th after suffering a horrendous foot injury in the lead-up to the games, with his foot going through the spokes on his wheel in his final warm up race, leaving him with over 20 stitches.

“The Olympics is the pinnacle of most sports in the world. As a kid I dreamed about being there one day, in every one of those dreams I’m sure it ended with me winning gold. I am under no illusion as to how hard this will be but I am fully prepared to give it everything I have to make it happen on the one day that matters most.”

“Words cannot explain how I feel. I still don’t think it has sunk in that I am going to the Olympics!! After the race situation in Sydney and my crash in the early stages of the race I was extremely disappointed and upset that I couldn’t continue the race and show that I was capable of another good result. However I knew I had two other races banked and it was out of my control so there was nothing more I could do but wait for the selection.

“This means so much to me. It’s truly a dream come true and to be going alongside some of my best friends is going to be even better, especially with the experience that I know Bevan and Kris will bring to the team. For me this will be a great experience going to the Olympics at 24 years old, with the possibility of being able to compete in at least 1-2 more Olympics, it will truly be the best situation getting one under the belt before going to Rio 2016 hunting that Gold medal. I just can’t wait to get back into training and be in my best possibly shape come August.

“My goal is not just to attend the Olympics. I’m going there to race well and race hard. My goal is a top 10. I know that if all goes to plan this is a realistic goal and I just can’t wait to get back into training, more motivated than ever. I will now plan with my coach and Tri NZ as to what needs to be done and what races I will be doing in order to ensure I am best prepared come race day. I can’t tell you how excited I am!”

“Andrea, Kate, Nicky, Kris, Bevan and Ryan are superb athletes and wonderful ambassadors for the sport and the country. They have come through a comprehensive selection process and are deserving of their places on the start line in London.

“As selectors we were committed to ensuring a transparent, fair and rigorous process was agreed and implemented. That process was communicated to all athletes and coaches one year ago, with clear opportunities along the way to qualify for London, culminating in the Sydney race last weekend. We are confident this process has delivered 6 athletes who will represent New Zealand with pride and deliver outstanding results in London. That process has subsequently been ratified by the Tri NZ Board and the NZOC.

“While celebrating the success of those named today and wishing them and Greg well in London, we would like to acknowledge those athletes who were not selected, and highlight that it was a very difficult decision. It is their calibre that demonstrates the depth and talent of triathletes in New Zealand.”