The largest-ever Paratriathlon took place at the Dextro Energy Triathlon ITU World Championship Budapest Grand Final today, with 85 athletes representing 15 countries taking part. World Champions were crowned in all six Paratriathlon categories, as athletes battled through rainy and cold early morning conditions in the Hungarian capital. Athletes completed a Sprint-distance triathlon, consisting of a 750-meter swim in the River Danube, a 20K bike along the banks of the River and a 5K run around some of Budapest’s most iconic landmarks, including the Szechenyi Chain Bridge and Hungarian Parliament Building.

In the TRI 1 category (handcycle), Brit Jane Egan took top honors, finishing three minutes ahead of American Carly Waugh. The men’s TRI 1 category, with a total of 14 competitors, went to Austria’s Thomas Fruehwirth, who won a very tight race over Bill Chaffey of Australia by only six seconds.

The American team continued its great day in the TRI 2 category (severe leg impairment), winning both the men and women’s categories. Melissa Stockwell was victorious in the women’s contest, taking the world title in 1:39:00, while teammate Matt Perkins took home the men’s crown in 1:21:57.

A total of 85 Elite Paratriathletes representing 15 countries took part in today’s race, making it the biggest Paratriathlon of all-time.

Twelve men competed in the men’s TRI 3 category (les autre), with Frenchman Cedric Delescluse taking top honours in 1:11:50. American Craig Vogtsberger finished second in 1:15:00, with Sebastian Averesch of Germany rounding out the podium in 1:16:44. It was all Canada in the women’s TRI 3 category, as Lorene Hatelt and Kim Wedgerfield finished first and second, respecitvely.

It was Great Britain’s time to shine in the women’s TRI 4 category (arm impairment), with Faye McClelland and Clare Cunningham finishing first and second, respectively. McClelland finished in an impressive time of 1:14:12, with teammate Cunningham crossing the line in 1:15:20.

Hungary’s Peter Boronkay thrilled the home crowd in the men’s TRI 4 race, taking the title in 1:06:09. He held off Austria’s Oliver Dreier by 23 seconds. It was the second world title of the week for the host country, as Margit Vanek won the ITU Aquathlon World Championship on Wednesday.

“I had a good start and felt great for the whole swim,” Boronkay said afterward. “I was able to build a good lead on the bike, but I knew I was losing a little time to Dreier on the run. I knew he was right behind me at the finish, so I had to push very hard to hold him off. It is such a pleasure to defend my world title.”

The American team won its fourth title of the day in the women’s TRI 5 category (moderate leg impairment), as Megan Fisher took the title in 1:25:03. In the men’s contest, France’s Yan Guanter won the championship in 1:07:59, finishing just over one minute ahead of American JP Theberge.

Great Britain was dominant in the TRI 6 category (visual impairment), with Charlotte Ellis and Iain Dawson taking the world titles. Ellis won the women’s race in 1:16:35, while Dawson took the men’s title in 1:05:15.

ITU formally submitted an application in July for the inclusion of Paratriathlon into the Paralympic Programme, beginning with the 2016 Games in Rio. The 120-page dossier was submitted by ITU with passionate letters of support by a group of experienced Paratriathletes. The International Paralympic Committee (IPC) will decide which sports will be added to the 2016 Paralympic Games in December of this year.

“Triathlon really does belong in the Paralympics,” said Paratriathlon legend Sarah Reinertsen (USA) after today’s race. “That’s been a huge motivation for me. I’d love to see it happen and hopefully we will see it come 2016.” 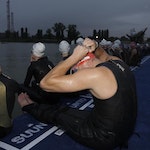 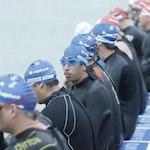 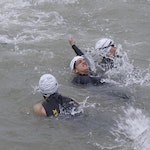 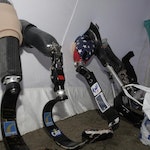 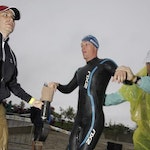 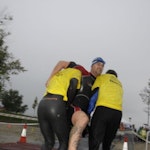 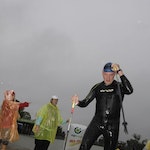 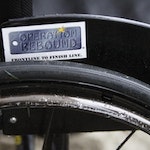 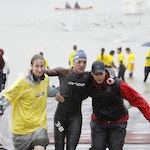 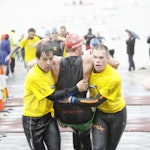 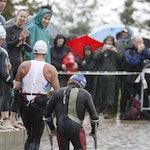