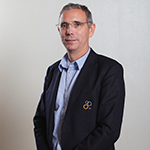 Antonio F. Arimany has been Secretary General since December 2016. Before that, he was Director General of the International Triathlon Union since 2014, and from 2010 to 2014 he served as Administration Legal and Finance Director. He has extensive experience and expertise in the Olympic Movement as he worked for the Athens Olympic and Paralympic Organising Committee and several Olympic bids. Mr. Arimany is also member of the ASOIF Legal Consultative Group.

Mr. Arimany was Regional Manager for NOCs Relations and Services in the Athens Olympic and Paralympic Games in Athens, where he was responsible for the relations with all NOCs of the Americas.

Born in Madrid in 1968, Arimany started his competitive sport career in alpine skiing. Arimany has a Bachelor’s of Arts in Law and Business Administration, Master Degree Management of Sport Entities and Doctorate in Environmental Taxation. He resides in Madrid with his wife and three children.