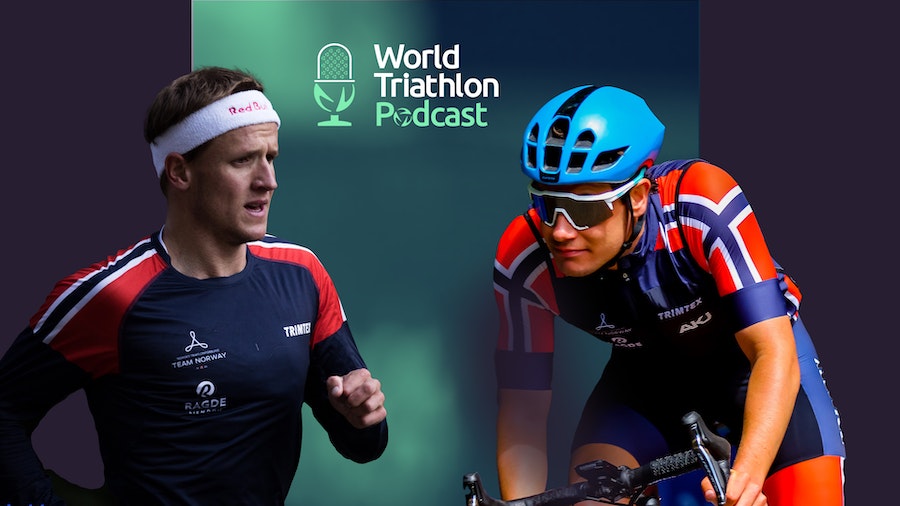 On episode 65 of the World Triathlon Podcast, we caught up with Kristian Blummenfelt and Gustav Iden ahead of the weekend’s first World Cup in their hometown of Bergen. With only one appearance between them on the blue carpet so far in 2022, the race will be a fascinating test of their adaptability from the long course action that the pair have been so successful in for the past 12 months, as well as a celebration of all that they have achieved for Norwegian triathlon.

As well as the ins and outs of the new course and the secrets of their ‘City of Seven Mountains’, the pair open up about their ongoing ability to push each other to new levels in training, what they consider each other’s secret weapons, and exactly what will be required to produce the result they are seeking at Paris 2024.

Listen to the full episode on Spotify, Apple and Google and watch the Bergen World Cup over on TriathlonLive.tv on Sunday 28 August.

—
“It’s strange traveling home in the same way as traveling to a race,” admits Blummenfelt from his Bergen HQ, having just tested the bike course and swum in the chilly ocean he estimates to be around 14-15 degrees. “It’s like we came straight from the Collins Cup and we’re just here basically for the race, leaving again on Monday, but it it’s good to first be home and feels very special to have this race downtown - really downtown - in the heart of Bergen.”

There has been no specific secret behind Bergen’s remarkable triathlon success story that saw the first ever sweep of a men’s Series podium at WTS Bermuda back in 2018. There is no steep local hill up which Blummenfelt, Iden and Casper Stornes all had to bike to school or fjord to cross to their houses, and they only met for the first time on the national junior programme.

“I think it’s more like a coincidence that we’re all from the same city. Gus comes from the complete opposite side of Bergen. And Casper, he was also on kind of the third opposite side of the town, so it’s not like we are from the same neighbourhood really. But then when we started with the youth national team and the junior national team I think we just realised that it was much more fun to train together than doing it all by yourself.”

Having kept a close eye on the world title battles so far in 2022, there can be little doubt that the pair will be targeting the top of the rankings in 2023, and that they know the bar has been raised once again in their absence. Iden was unable to find any bike power at WTCS Leeds and finished last, while Blummenfelt’s first Series action since Edmonton 2021 is likely to be WTCS Bermuda.

“The race dynamic this year seems quite favourable for the way we raced earlier, the guys up front tending to be kind of second pack. So it’s not like a top five break away from the swim that I thought would come this year with the French guys and Johnny Brownlee, I thought that they would be able to get away more often than they have done. So, uh, it’s been looking good in terms of our strengths,” said Blummenfelt.

“Our training philosophy is always evolving, and we are still learning a lot of things about both ourself and training in general,” adds Iden. “It’s not like you’re gonna find a minute now at our level, but you can find the seconds. Maybe actually for me, if I am able to improve my swimming five nots then I can find a minute, but it’s mostly finding where we can push those seconds for the full event.”

Despite all of their successes in recent years, even an Olympic gold medal and world titles won’t get them spotted walking down the street or around Bergen Harbour. Considering the pair have been the names on everyone’s lips in the sport as they’ve made a huge impact on longer course racing, something Kristian admits has fuelled his fire to succeed, the anonymity is a mark of Norway’s laidback approach to its sporting heroes.

“It’s funny, since we came back both me and Gustav have been stopped twice in the street… both times by tourists, one Brit and one French. So nothing has changed too much. I think they feel the win should be a walk in the park but it’s going to be tough.. though I still have a little hope inside me I can win.”

Listen to the full interview as Gustav discusses the highs and lows of his last place finish in WTCS Leeds, why he fears a bird attack while swimming and drinking milk during an Ironman, what Kristian considers his friends secret weapon and why he can’t wait to test himself at November’s World Triathlon Championship Finals Abu Dhabi.