Slovakia’s Richard Varga defended his elite men’s Aquathlon title, while Russia’s Irina Abysova collected her first on the first day of racing at the PruHealth 2013 World Triathlon Grand Final in London on Wednesday.

In the quick swim-run discipline which consists of a 1km swim and a 5km run, Varga exited the Serpentine in an 11:16 swim and while he lost some time in the first transition, he was able to stride ahead on the run and won in a time of 28 minutes and 40 seconds, 13 seconds ahead of a fast-finishing Ivan Ivanov of Ukraine. Ivanov clocked the day’s fastest run, and the only sub-16 minute time, to run himself into silver. Hungary’s Csaba Rendes collected the bronze.

It was Varga’s third elite Aquathlon world title, and he said his first feeling was one of relief after spending the weeks since Stockholm on the sidelines with sickness.

“I think today was pretty dramatic, because I didn’t know if I could race on Sunday, last week I was really sick,” Varga said. “So this was my first hard training before the world championships after Stockholm, so I am pretty pleased. And also as I had a 15 second penalty, I’m pretty happy that I could win today. It’s good hard training and to be World Champion for the third time is pretty great.”

In a close women’s race, Abysova exited the water down on New Zealand’s Rebecca Clarke and Croatia’s Daria Pletikapa but collected them in the second lap of the 5km run to win in a time of 31:46.

“It was a hard race, I’m so happy. I had a not so good swim as I didn’t have a warm-up, but after that I had a fast run,” Abysova said.

Belgium’s Claire Michel collected silver, her first major ITU podium, and the former track athlete for the University of Oregon, and she was happy her plan had paid off.

“The biggest goal was just to have a good swim, to stay with the pack and practise sigthings and stay straight, and then have a good transition and pick off as many as I could on the run. It wasn’t quite enough to catch the first place girl, but it was a good race effort,” Michel said.

Ukraine’s Yuyila Yelistratova finished strongly to claim bronze, the second elite medal of the day for Ukraine and said she was happy to create some good memories in London after crashing out of the London 2012 Olympic race last year.

“It was my aim, I was looking forward to this event, it was a good chance for me to be on the podium. For triathlon events I’m still young and it’s still complicated to fight with the strong women, but for aquathlon I trained hard for it and I’m satisfied with my result,” she said. “The Olympics I didn’t have a good race, unfortunately I had a crash and some technical problems with my bike and I didn’t manage to finish, but I’m glad to back to London, it’s one of my favourite places in the world and I’m glad to do well here today.”

Great Britain’s David Bishop collected the U23 men’s Aquathlon title ahead of Slovakia’s Martin Matusek and Slovenia’s Matija Meden, while New Zealand’s Maddie Dillon triumphed in the women’s U23 race. Russia’s Anastasia Uvarova collected silver in the U23 women’s race and Switzerland’s Pauline Purro the bronze. 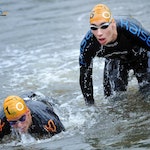 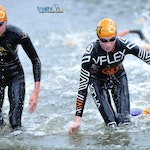 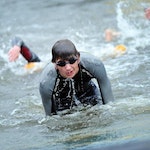 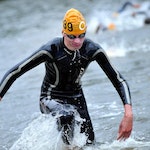 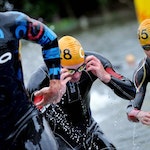 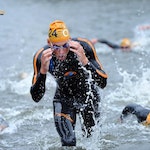 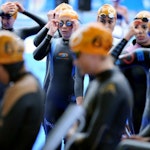 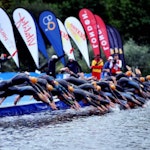 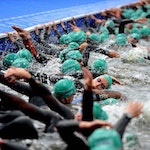 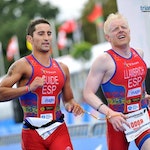 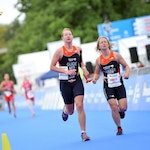 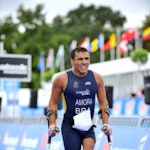