by Chelsea White on 09 May, 2015 05:10 • Español
American has another fleet-footed triathlete on the scene as yet again it was the Star Spangled Banner ringing out around an ITU race, this time at the ITU Chengdu World Cup in China.

American has another fleet-footed triathlete on the scene as yet again it was the Star Spangled Banner ringing out around an ITU race, this time at the ITU Chengdu World Cup in China.

In a battle of who can outrun the heat, Renee Tomlin (USA) demonstrated her athletic ability by not only taking home the gold medal at the 2015 Chengdu ITU World Cup, but did so in a come from behind performance.

Tomlin’s win is a first for the former track runner who has been in the sport for just over a year but today signalled that she surely has a long and successful career ahead of her, adding yet another name to the long list of impressive American women currently dominating the sport. Tomlin won in a time of 1:58:16, coming home in second on the day was Arina Shulgina (RUS), while third-place went to Lisa Perterer (AUT).

Tomlin is learning with each race and put some of those lessons from earlier in the season to good use today in temperatures that reached mid-thirties Celsius and felt much hotter.

“I guess coming off Mooloolaba where it was hot there and having some nutrition and hydration issues and having another hot race here I said ‘I have to nail it’ and thankfully I did. I made sure those things were a priority, I am only a year into the sport and these are things I am still learning about coming from a 4 minute race into a 2 hour race.”

Learn she did, riding in the chase group to close on the leaders as they entered T2, the entire podium came from the chasers but it was Tomlin who bided her time and ran through the field, closing on Perterer and Shulgina with one lap to go.

“I didn’t have splits but I was gauging off the front runners and trying to say relaxed, as cool as possible and work my way into it. The run is definitely my comfort zone but I look forward to nailing the swim and the bike and put myself in a better position.”

Tomlin was quick to point out the team work behind the scenes as she basked in her gold medal performance.

“It feels really good, a lot of the little lessons learned are starting to pay off, this is years’ worth of work and having Jarrod Evans (USA National Development Coach), Jono Hall, Bobby McGee (USA Tri High Performance Advisors) and some of my training partners like Kirsten Kasper, we are really excited and keep moving forward.”

“I am so happy, the swim was just okay, the bike we worked hard and the run was good but at the end I did not have any more energy to give, but I am very happy today.”

Perterer was delighted with another strong showing in China, proving again she loves the heat.

“It was a really hard race, especially after the swim when I went really bad but when I came out of the water I thought wow, this will be really hard today but we worked hard together and we caught the lead group. This was a good World Cup podium, it was very close to a win but the energy was not there in the end.

“There were some on the bike who were working and some not, I tried to push a lot especially at the beginning and to get more to work hard, but it was good in the end. I came back here because I like this place for triathlon, I am happy with my third place and maybe next year I can improve again, but this is very nice.”

With the women’s race starting second after the men in Chengdu, the heat of the day took full affect with the temperature at 33 degrees Celsius at race start but in reality feeling much hotter with the added humidity.

Starting out strong in the two-lap swim, USA’s Summer Cook established herself near the front of the race, leading into T1 and racing strongly to eventually finish 4th.

The chase group was huge at 43 and with the gap close to one minute with two laps of the six to ride on the bike, few thought they would make an impression, but thanks to some strong work by them and poor work by the leaders, the gap did close right on entry to T2 and the race was transformed, with each of the medal winners coming from that second group.

Yuko Takahashi (JPN) led out of T2 and immediately put a gap on the chasers, looking like she meant business. But the lead was short lived and the big guns on the run soon took control, with Perterer, Shulgina and Cook amonst the first to show out, before Tomlin made her charge, taking 13 seconds out of Perterer and Shulgina on the third lap before easing clear for her first World Cup win.

It was a race of high attrition with the heat taking a toll and the ice baths well utilized upon crossing the finish line. The crowds were again amazing, with tens of thousands lining the course and the transition area on this purpose built triathlon course in the Jintang province of Chengdu. 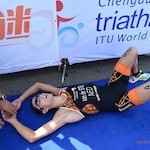 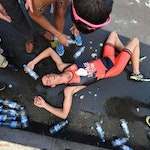 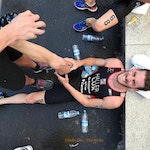 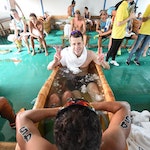 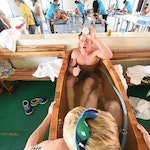 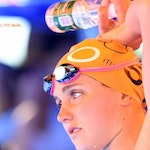 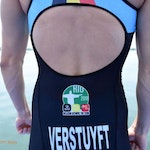 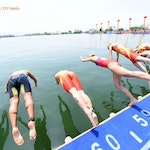 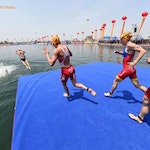 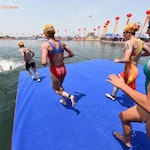