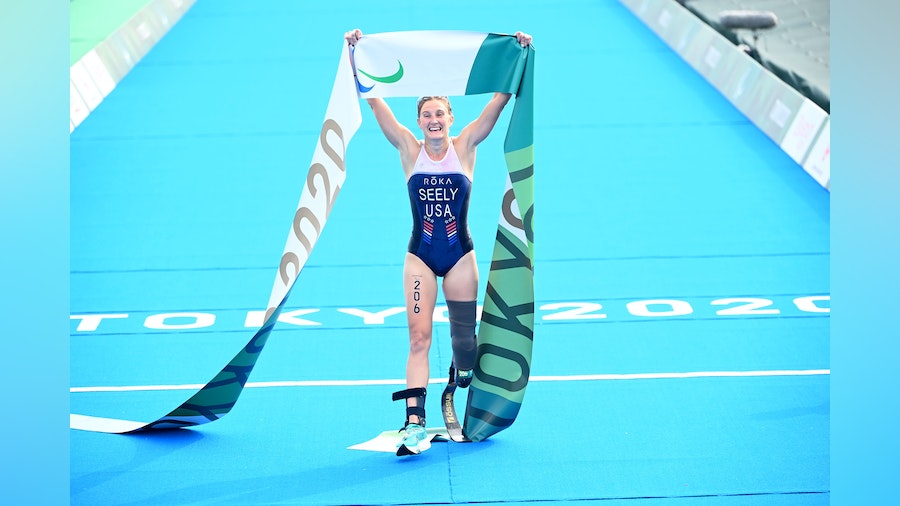 American para triathlete Alysa Seely (USA) has been dominating the PTS2 class for several years, and she proved that in Tokyo as well. In a hot and humid morning in Odaiba Bay, she wrote her name on the history books displaying a powerful run to cross the finish line first of the Tokyo 2020 Paralympic Games PTS2 class to become the first woman to ever win two consecutive gold medals - Rio 2016 and Tokyo 2020- in Para Triathlon. Behind her, her teammate Hailey Danz claimed silver and Italian Veronica Yoko Plebani finished in the third place.

Only 8 women toed the start line in the PTS2 class in Tokyo, for a sprint distance race consisting of a single 750m lap of the Bay, followed by four 5km laps of a flat and technical bike course towards Ariake Tennis Park then heading north over Fujimi Bridge and doubling back towards Odaiba. The final run segment will see four laps of 1.25km, finishing in front of the grandstands on Odaiba Beach.

And it was Yukako Hata (JPN) who showed a magnificent display of swimming technique, for much delight of the locals, to lead the swim and even making up over one minute to enter the first transition ahead of some PTS4 men that had started one minute before.

Behind her, the American trio of Melissa Stockwell, Hailey Danz and Alysa Seely were trying to push to put themselves in a position to repeat the podium sweep for their country as they did in Rio 2016, but the young Italian Veronica Yoko Plebani was up for the challenge of trying to avoid it, along with British Fran Brown.

As soon as they were on their bikes, Hata couldn’t keep up with their pace and the fourth of them just went all in, taking turns in the lead to establish a gap with the fifth place of almost 2 minutes by the end f the 20km ride, but staying all four of them quite close together, in less than 30 seconds.

With four places for only three medals, it was clear that everything was going to be decided in the 5km final run, and it was Danz who decided to strike first, establishing in the first kilometer a significant gap, with Brown struggling to keep up with the three leaders. Despite Danz not ever looking back, it was a matter of time that Seeley decided to go for it and passed her teammate with less than one kilometer to go, proving that she is the fastest runner on the field.

Seely crossed the first line in first place, the second consecutive Paralympic gold of her career, to look back and see her teammate and training partner Danz finishing in second, while Plebani was all smiles to claim the bronze medal.

“I just can’t believe what happened this morning, it is just incredible”, said Seely. “My real goal was to create as much of a gap on the bike course (as possible) because I know that is my strength. I came off with a gap (after the bike) that I felt was going to be enough, but I guess I just didn’t have the run legs today.”, said her teammate Danz.

Brown, still recovering from a partial bowel removal that has left her with hydration and nutrition issues lately, finished in fourth place, while Melissa Stockell, the USA flagbearer and bronze medallist in Rio 2016, closed the top five. Behind her, Hata, Rakel Mateo Uriarte (ESP) and Veronika Gabitova (RPC), who made her debut at the Games after missing Rio 2016 due to the ban on Russia.

This medal event saw the withdraw of Liisa Lilja from Finland just 10 days before the Games started, due to a road bike accident, which adds to the one suffered by French Cecile Saboreau at the end of July. This has left the field with only 8 athletes.