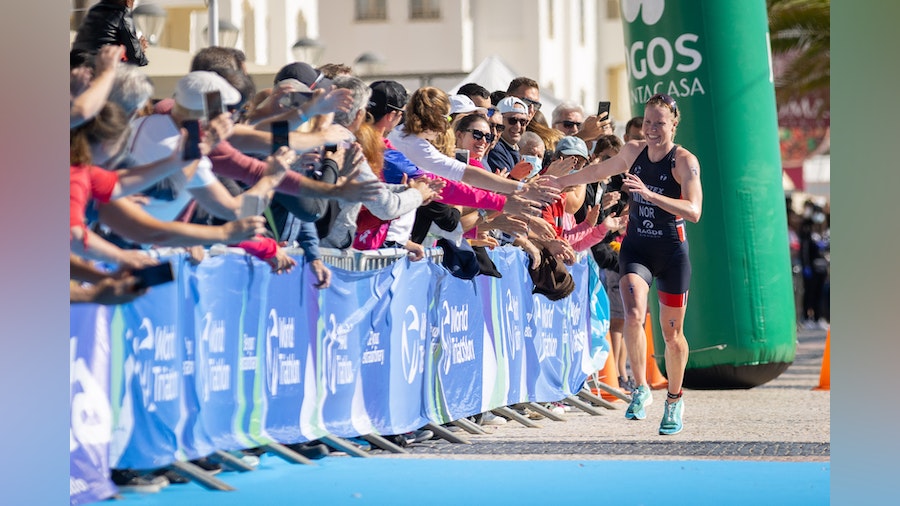 Following her Olympic debut earlier this year in Tokyo and fresh from Europe Triathlon Cup gold in Quarteira at the weekend, Norway’s Lotte Miller is the latest guest on episode 51 of the World Triathlon Podcast, dialling in from Scotland as she prepared for the off season.

The year’s final race in Portugal was in many ways a microcosm of her 2021 as a whole: pure highs, agonising lows, but ultimately successful, negotiating a bike crash followed by a double dose of cramp on the run that was still not enough to keep the 25-year-old from a first international triumph. You can hear the whole episode and just how Miller handled the stress of that race, the rigours of Tokyo and the recurring threat of burnout, as well as the joy that has been becoming part of the Team Norway set up, on Apple, Spotify and Google.

—
Growing up in Stavanger, on Norway’s south west coast to a Scottish dad and Norwegian mum, Lotte Miller has also always called Edinburgh home. It is where she is beginning to ease into the 2021-2022 off season on a high from a Continental Cup gold and ready to properly take her foot off the pedal for the first time since January.

“The fact that I’m ending the season on a high note makes me go into this off season more relaxed and feeling like I deserve to rest. But I don’t usually feel the pressure to exercise, I feel more motivated and fresh to get back into it when I then actually start training again.”

For someone who has already experienced severe burnout several times in her career, hitting that off switch has become hugely important. The first time came after her Junior Championships debut in 2013 and then again after her bronze in 2015, wanting to build on success but without the tools to do so as carefully as she now realises she needed to.

“There were two seasons, 2014 and 2016, where I just couldn’t race because I was totally burnt out. So that was kind of a period where I was heading into winter training, often not having had a season at all. Because I’m a very committed athlete, physically but also psychologically, this is my time to de-stress. I think that’s a good thing for me going into 2022 and because 2021 was a very challenging season for me, very mixed. Some really big highs, but also some real lows.”

“But it doesn’t matter if you’ve had a bad end or good end, I think it’s actually being able to distance yourself from the sport for a couple of weeks is really good because, even ending it on a high, you can be really motivated and forget to take that break. (In 2014 and 2016) I forgot to take a rest and I pushed and pushed. Then January, February leading into the next season, my body just broke down, and I think that was all the mental and physical stress.”

Lotte has now become better at reading the signals her body is giving her so that she can cut that stress out before it has time to take root. Part of that, she says, is stepping back to consider if what you are trying to do is sustainable over a period of time because, if not, you’re going somewhere that isn’t going to be helpful in the long run.

“Your body’s always giving you clues - are you sleeping well? How is our mood? Are you looking at yourself in a positive way or in a negative way? And I find if you start lacking the mental energy, you’re not smiling and laughing and enjoying what you’re doing anymore. If your appetite isn’t there, you’re not sleeping well, everything is a bit off balance, that’s a really good sign you’re somewhere you don’t want to be, because it’s not going to hold over a longer period of time.”

Lotte believes that taking the time out from training and competing helped her to revaluate who she was as a person, what she was aiming for and what would ultimately make her happy in her day-job - being a triathlete.

“What my dad told me when I’ve been going through these tough times is ‘you can stop whenever you want, but you just have to remember you’re in a position that only a small percentage of the world will ever come to you. You’re at the top of something, you’re the elite.’ I thought that was a very nice way of saying ‘enjoy it while it lasts’ - because you’ll never get that back.”

Ahead of the postponed Tokyo 2020 Games, Lotte joined Kristian Blummenfelt, Gustav Iden and Casper Stornes to train and admits it was an intimidating environment to suddenly find herself in, that the culture was to be the best and that meant number one in the world, something she wasn’t perhaps ready to believe about herself.

“The fact that I had the feeling that I had to say, I’m going into this race and I’m going to be the best was kind of, I was lying to myself and I knew I was lying to myself. It was kind of de-motivating and that was all on me. It was nothing to do with the team, but it was just the fact that these guys are in a position now where they can say, I want to win. And because they’re in the position where they believe that they can, and I’m in a position where a top 10 is amazing.”

You can also listen to the whole podcast here: