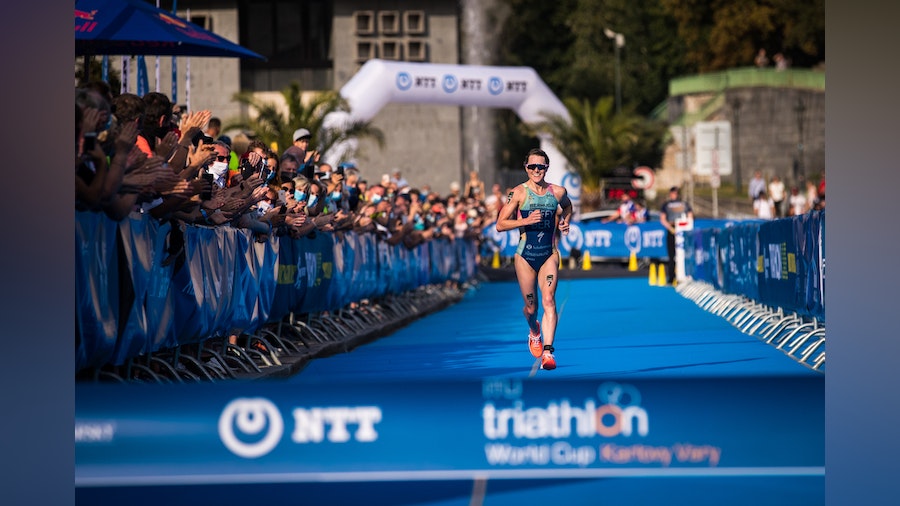 One of the undisputed greats of the sport, Bermuda’s Flora Duffy has won two world titles, the Commonwealth Games, dominated the sport at the top level for much of the 2016-2018 period and then bounced back from an extended injury period with an impressive display at the Tokyo Test Event. At Rio 2016 Duffy finished eighth, now, she is eyeing the final prize of a glittering career: an Olympic medal.

Duffy may be heading to Tokyo with just one appearance on the blue carpet in 10 months, but the tail end of 2020 offered glimpses of what she is capable of with superb displays in tough conditions in Arzachena and Karlovy Vary. A combination of injury niggles and travel restrictions have seen race opportunities cut back once more, but as we caught up with her ahead of WTCS Leeds last month, there was no sign of letting any of that play on her mind. In fact, Duffy’s confidence in her own abilities was as high as ever.

“The build up to Tokyo has been very different to Rio 2016, where I’d raced four or five times prior to the Games and was in that racing rhythm,” she said. “This time, to race only once before the Games is very strange but it is what it is. We had a taste of this last year when there were very few races and the Olympics was postponed, so we already have some experience with dealing with lots of unknowns and changes, constantly adapting to whatever the new protocols are, so I’ve been mentally prepared for that. I’ve been doing this many years now so I’ll take confidence that I’m a racer naturally and I can turn up on a start line ready to go.”

At the same time, the size of the task in hand is certainly not lost on Duffy. There are numerous pressures added to the build up to this Games even more than others, not least the battle with fitness and the need to be ready for the biggest one-day race in the world again, a full 12 months after the date everyone was planning towards.

“To have a year postponement is pretty massive, that you have this Olympic burden almost on you for another year. Yes, i’m excited to race but there are a lot of things that come with the Olympics that you have to manage - the emotions and expectations and pressures for another year amongst Covid is a lot and I certainly hope it isn’t something anyone has to deal with again.”

There may only be three years to Paris 2024, but there seems little doubt that Tokyo represents a final Olympic Triathlon tango for the 33-year-old.

“This is a one-day event where everything matters, from the last four – or five – years of your life. It’s massive, and you don’t always get another shot. This will be my last Olympics, i’m not going to be going to Paris, so i’m at the top of my game and Tokyo is the day that matters for me.”

That WTCS Leeds race in June was, much like her unusual win at the Tokyo Test Event, a bit of a work in progress on the road back to full fitness. That she came back from a tough time in the water and finished 4th in a stacked field having been able to power through the 10km run unscathed was just the boost she will have wanted from that final fling before taking all the years of big-race experience to Tokyo.

“(In Leeds) I got hammered in the swim and had to work my way up the field. I did the best to bridge the gap and my bike was solid. I didn’t even think I was going to start the race so I can be happy with fourth. I was most worried about my run but that was the best of the three segments. I had to overcome quite a bit of adversity in that race and work for that result.”

Then there are the unique elements to the line up in play at a Games that add to the unpredictability of an Olympic triathlon. Duffy has been training in Boulder, USA with Chelsea Burns and Canada’s Joanna Brown, with the latter also heading to Tokyo. The training block now complete, the start lists finalised and transition draw confirmed, everything is taking shape. Being right at the start of transition by the dismount line could be another one of the small factors that may help the Bermudian hero’s medal challenge, but however you cut it, Duffy will ensure she is prepared for everything.