New champion to be named in elite women's race 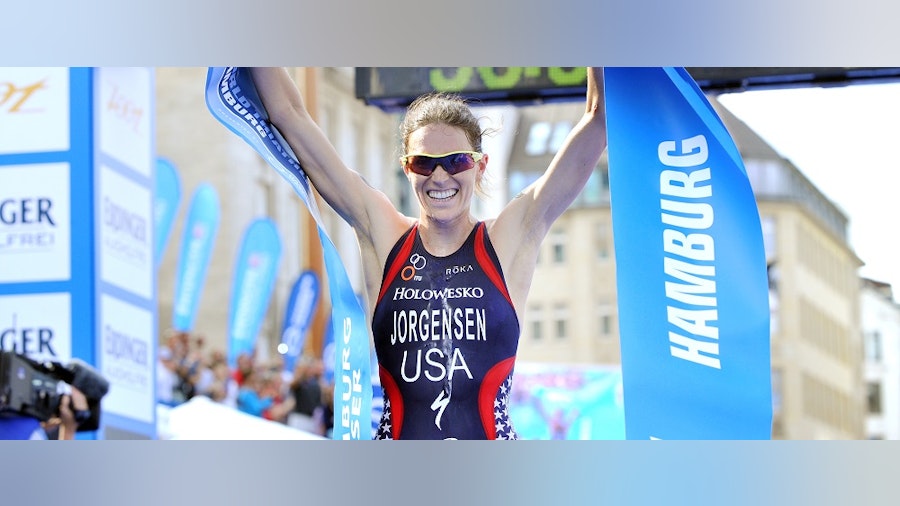 After a season filled with thrills and spills, triumphs and tough setbacks, the naming of the next women’s elite World Champion all comes down to Edmonton. After seven races across four continents, only a 1.5km swim, 40km bike and 10km run remains between the elite women and World Championship glory. The USA’s Gwen Jorgensen is the heavy favourite ahead of Saturday’s race, followed by compatriot Sarah Groff and Great Britain’s Jodie Stimpson.

A game of points
Jorgensen sits a comfortable 848 points ahead of Groff, who won her first WTS race last week in Stockholm to leap frog from fifth to second in the rankings. Jorgensen will need to finish 16th or higher to keep the title from slipping to Groff’s hands or above 18th to ward off Stimpson. While that should be more than manageable, nothing is certain in triathlon. Last year, a bone-chilling swim and crash on the bike ended Jorgensen’s dream of being the World Champ. Stimpson took second in the 2013 rankings, which likely spurs her desire to change that silver to gold, but the Brit already peaked once this year as the Commonwealth Games gold medallist & remains to be seen if she can repeat that performance this weekend. For her to take over Groff in the rankings, she’ll simply need to beat the Americans.

Andrea Hewitt (NZL) is one of the most consistent top performers on the start list. She’s been ranked in the top three on three occasions since the Series inception in 2009. It’ll take some work & luck for her to sneak into the top three this year, but it’s not impossible.

Sink or swim
The swim is particularly important in the women’s elite race, as position out of the water could majorly factor in the race outcome. Carolina Routier (ESP), Claudia Rivas (MEX), Lucy Hall (GBR), and Pamela Oliveira (BRA) traditionally set the pace in the water, while the likes of Stimpson, Groff, Hewitt and Kirsten Sweetland (CAN) have no problems keeping pace.

If it’s a wetsuit swim, Jorgensen stands a good chance at swimming with the best of them. While we rarely see Stimpson with a poor swim, a slow start in Stockholm set her back massively on the Threadneedle Rankings when she wasn’t able to bridge up for a podium position. Big biking
Although there aren’t many women in serious contention for the world title, there is some tough competition that could seriously upset those that are. Hall and Oliveira, already noted for their strong swims, are becoming equally as impressive on two wheels. With a tough bike course that features a hill on each of the two long loops, look for Hall to push out a heady pace in an effort to separate the leaders from Jorgensen, which will be key for teammate Stimpson.

The women’s circuit features several strong cyclists such as Sweetland, Hewitt, Nicky Samuels (NZL), Lindsay Jerdonek (USA), and Flora Duffy (USA) that could make a major difference on the bike. If Hall and company like Stimpson, Groff, Sweetland, Hewitt, and Emma Jackson (AUS) can get away, they’ll stand a chance at holding off the Series leader.

Runners up
As we’ve seen time and again this year, it’s not critical for Jorgensen to make the front pack on the bike, only that it doesn’t get too far ahead. Jorgensen consistently chomps up 90-second disadvantages off the bike like it’s a breeze. If the seven-time WTS winner is anywhere near the leaders, the world title will likely go to Jorgensen.

Several women have recently stepped up their run, like Sweetland who was a major player on the swim and bike in the first half of the year. As of late, she’s been adding a speedy run to tie her race together. Likewise, Stimpson is always strong off the back end, as is Hewitt, Jackson, and Aileen Reid (IRL).

A new champion
With Emma Moffatt (AUS), Lisa Norden (SWE), Non Stanford (GBR) and Helen Jenkins (GBR) off the start list, a new world champion will be named in the women’s race. Since the format was changed from a one-day hit out race to the world title being won across the season in 2009, only these women have managed to earn a title.

Not only has an American not won the title in this format, the US had not won a single WTS title until last year when Jorgensen set off on a winning spree. Were the women to retain their 1-2 titles, it would be a massive gain for USA Triathlon’s program, but each of the four times that an American woman has won a World Championship, another American has finished third.

Follow all the events live with timing and text updates, at triathlon.org/live and on twitter at @triathlonlive. Don’t forget to pick who you think will be on the men’s and women’s podiums with TRIFECTA