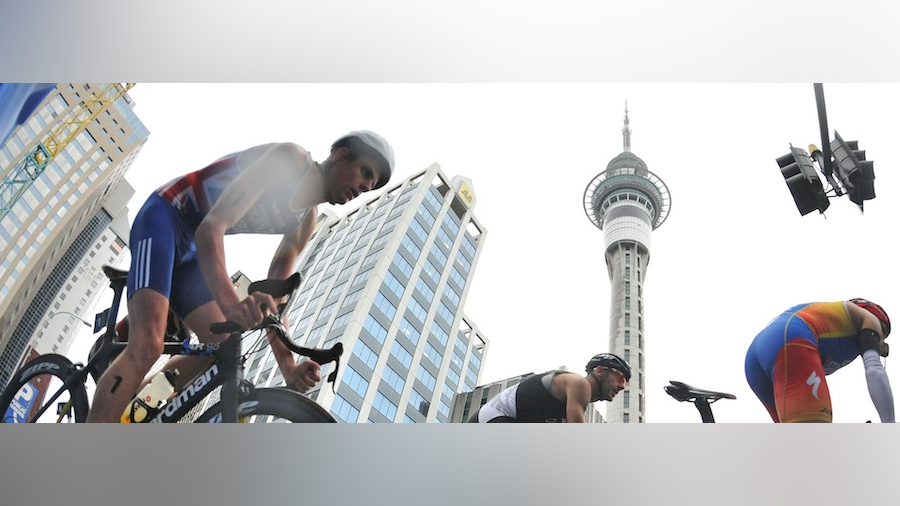 It marked the end of the World Triathlon Series last year, with a thrilling Grand Final punctuating an incredible season, but this year Auckland is just the start. The 1.5km harbour swim, followed by the eight-lap 40km bike through New Zealand’s largest city (complete with three separate climbs per lap) and a fast and technical four-lap 10km run marks the first stop of the 2013 ITU World Triathlon Series. With deep fields on offer in both the elite men’s and women’s races, it promises to be one worth watching.

Elite Women’s Preview
Germany’s Anne Haug turned on the biggest race of her life in Auckland last year, pulling out a stellar run leg after an equally excellent bike to earn her first major ITU win in the final race of the season. The pint-sized star has already started off 2013 exactly where she left off, with a dominating performance in Mooloolaba to claim the first ITU World Cup of the season. Those two performances mean that Haug deserves to be favourite to take the first World Triathlon Series title of the 2013 season this weekend, but there are a host of contenders who will be primed to do the same.

The field also includes last year’s silver medallist Gwen Jorgensen (USA), whose incredible 34 minute 10second run split was one of the standout legs of the entire season, let alone last year’s final.  It also proved that the Auckland podium is not always decided on the bike, Jorgensen started the run from the chase group but blew through the pack for her second series medal. Chile’s Barbara Riveros Diaz finished behind Jorgensen on the podium in the Grand Final race, and is another multiple series medallist who is always dangerous and back to try her luck in Auckland. Then there is the in-form Jodie Stimpson (GBR), her fifth place in the Auckland Grand Final is her best WTS career result and she is coming off a silver medal in Mooloolaba.

It’s hard to discount the strong Kiwi team racing at home, with multiple series winner Andrea Hewitt leading the way. Hewitt dominated the course to win the ITU World Cup event here in 2011, and Nicky Samuels and Kate McIlroy also have a racing style that suits this course. Also keep an eye out for ITU legend Samantha Warriner. The seven-time World Cup winner is making her return to racing after the birth of her daughter Lola-Rose in 2012.

If the pack is still together when it comes to the run, then also watch for the Netherlands Maaike Caelers, who climbed onto two WTS podiums in the 2012 season, four-time Olympian Anja Dittmer (GER) and Australia’s Emma Jackson. Also keep an eye on Aileen Reid (nee Morrison). Last year she had a torrid day in Auckland with a DNF. Combined with her 43rd place in the Olympics and 36th in Hamburg, it seemed like an unfulfilled 2012 after posting two consecutive ITU podiums earlier in the year, a World Cup in Ishigaki and then the series event in Madrid. Reid is one of the series best on her day, and is coming off a sixth place in Mooloolaba.

Elite Men’s Preview
In parallels with the women’s race, the men’s race favourite is the man who took the 2012 Auckland Grand Final title and kickstarted his 2013 season with a win in Mooloolaba, Javier Gomez. The London Olympics silver medallist had one of his most memorable races in Auckland last year, just pipping Jonathan Brownlee over the line in an epic race finish to claim his first Grand Final series win. In Mooloolaba, he was similarly impressive – leading almost from go to whoa in his 13th ITU World Cup win. That win moved Gomez to second overall in the ITU World Cup winners list, moving clear of Simon Whitfield but behind Australia’s Brad Beven. An opening series win would also help ink another piece of history, with no Brownlees on the start line, Gomez can move ahead of Jonathan on the list of WTS victories. Alistair Brownlee currently leads with 12 titles, with Gomez and Jonathan tied at four. A win here would be an excellent early-season points boost as Gomez aims to clasp the ITU World Championship back from Yorkshire’s finest brothers. Since 2008 the Brownlee’s and Gomez have had a monopoly on the ITU World Championship, Gomez won in 2008 and 2010, Alistair in 2009 and 2011 and Jonathan in 2012.

Those who are out to better the Spanish superstar include a strong German team of Steffen Justus and Jan Frodeno, France’s Laurent Vidal, Mooloolaba silver medallist Matt Chrabot, as well as New Zealand’s Ryan Sissons and Australia’s Aaron Royle – who took the 2012 Under23 World title on the course last year. If they can keep up on the tough bike leg, Spain’s Mario Mola and Portgual’s Joao Silva are definitely threats on the run course. Mola has often been touted by Gomez as the next Spanish superstar and has come tantalisingly close to an ITU podium over the past 12 months, while Silva is already a two-time series winner.

Then there is the Russian team, with almost a full hat trick of brothers. Together expect Alexander Bryukhankov and Andrey Bryukhankov, Ivan Vasiliev and Denis Vasiliev and Igor Polyanskiy to drive the pace at the start of the swim – alongside superfish Richard Varga – as well as feature in the tough bike. It’s also another chance for the elder Bryukhankov to break his streak as the most series medals without a win. Both Bryukhankov and Sven Riederer currently have six series medals, but are yet to stand on top of that WTS podium.