Athlete Chatter Ahead of #WTSBermuda 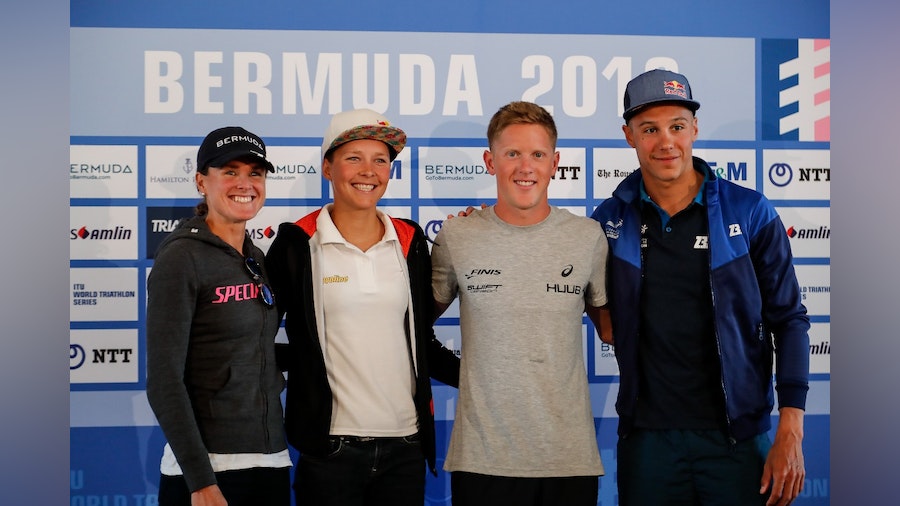 We have reached the second round of the 2018 World Triathlon Series, where the beautiful island of Bermuda will host the first Olympic-distance race of the season. So before we jump into the race excitement that will kick off Saturday, April 28, we grabbed some of our athletes and asked them to share their thoughts with the local media about being on the island for the first time and how they feel the course will be. Sitting down with Flora Duffy (BER), Rachel Klamer (NED), Henri Schoeman (RSA) and Vincent Luis (FRA), this is what they had to say:

Flora Duffy
About how exciting it is to be racing in your home country:
“It is really wonderful to be here. I remember when this race was announced, I think it was the end of 2016 and that felt like so far off, but really it has just flown by. I can’t believe I am sitting here and the race is in two-days’ time and all the athletes are here. I have been checking out there social media and it is so cool to see, because I have always been bragging about Bermuda and how pretty it is and how cool the vibe is here, so for them to be here and to be experiencing and sharing about it on their social media platforms, from what I have heard most are enjoying being here. It is really cool, special and overwhelming all at the same time.”

Talk about corkscrew hill and reminiscing about watching people race it when professional races were held in Bermuda about 10 years ago:
“Watching (people race triathlons on that hill) is what inspired me to become a professional triathlete because that was the first time I realized that you can actually do this sport and make a living. So it is pretty cool to come full circle and be here and doing that. Ten times is going to impressive going up that hill, but it should be good. Also growing up on Front Street on the Front Street mile and running up and down, so I also know how hard that can be. It is very deceiving. So yeah it is a very tough and gritty course, but that is great!”

Rachel Klamer
What do you think about it being the first Olympic-distance course of the WTS season?
“I always used to think that I was better at doing an Olympic distance until I realized that I have only gotten medals in sprint-distance races, so that is making me a little bit confused! I saw the hill and it is definitely a lot steeper than I thought. I had heard some rumours about what the course will be like and I thought ‘well it can’t be that bad.’ But when I saw it, it definitely is steeper than I thought! So I excited to do it at the course familiarization. I am excited to do the longer distance and it is going to be tough, but I really like hard races. I normally run better when it has been a really hard bike course, so I am not looking forward to that hill but I know it is going to be better for me.”

Henri Schoeman
What do you think about Bermuda?
“First of all, I am really excited to be here in Bermuda, I have always like island vibes. With the tough course, it is very interesting. I have done a little bit of scouting, but I am really looking forward to the course familiarizations coming up tomorrow (Friday) so I can see the course and give it a good feel.”

Vincent Luis
The weather forecast for Saturday has us a little concerned, how do you prepare to race in that type of weather?
“I am getting enough of that (rain) in France so it’s not that easy. I am used to tough weather. I have to confess that I prefer a little bit of raining. I remember Rotterdam and that was really nice for me. While I am not hoping for a rain race, I have to be ready for every type of racing, so it doesn’t really matter for me, it just matters for the others.”

The elite men will kick off the 2018 MS Amlin World Triathlon Bermuda event on Saturday, April 28 at 13:00 local time. The women will follow shortly after at 16:00. You can catch both races LIVE and on-demand on TriathlonLIVE.tv and follow along with play-by-play updates on our Twitter @TriathlonLIVE as well as Instagram and Facebook. You can also join in on the conversation using #WTSBermuda.