Athlete chatter ahead of WTS Bermuda 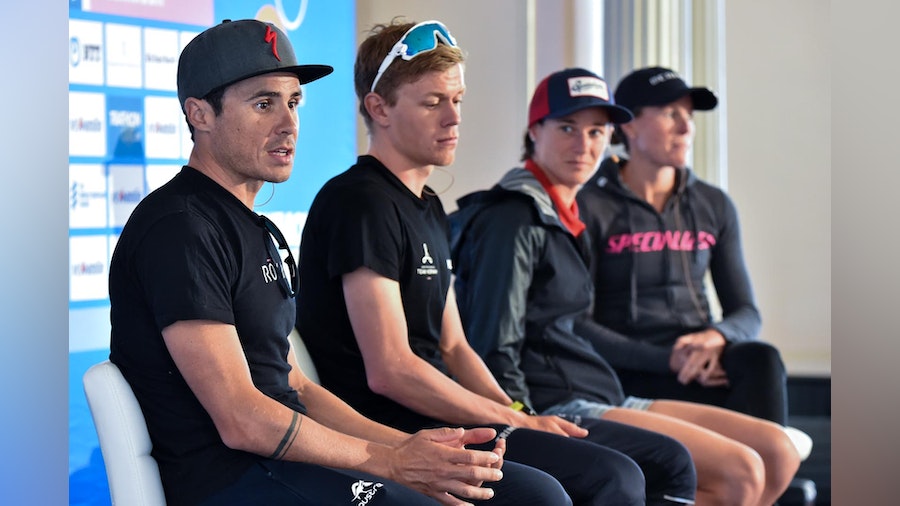 Bermuda is ready. Saturday afternoon sees the second stop of the 2019 World Triathlon Series take over the island once more and as the athletes go through their final preparations, last year’s winners Flora Duffy and Casper Stornes, number one Katie Zaferes and returning legend Javier Gomez Noya gave their pre-race thoughts to the assembled media.

Javier Gomez Noya
On returning to the WTS circuit: “I’m really excited to be back to ITU racing after a year more focussed on long distance races. This is my first big race this year, and the goal is to qualify for Tokyo 2020 Olympics. Let’s see how it goes, but obviously when you hit a start line you do it because you want to win the race.”

On the course in Bermuda. “It is a really tough course, and I really like that, I think those fit me well. Hopefully I can have a good race and be ready for the next ones coming up.”

On whether he feels more comfortable in this format of races or in Ironman: “Probably I feel better with this format, I’ve been doing this for a while now. ITU races are very tough, very competitive, and I think the very best athletes in the world are here, so it will be a very tough competition. Here, if you have a bad day you can end up in 30th position. Everything in these races is very competitive, and you cannot make any mistakes.”

On whether having someone from your own country can help in a race: “It really depends on the race. If you can help your countrymen you will do it, but then you have to look out for yourself as well. Spain, we have a pretty strong team, and we all have our chance to win the race, Mario Mola, Fernando Alarza or myself. It all will depend on how the race unfolds. The Norwegian team did it excellently last year, and what they did is really hard to do at this level of races, so all my respect for that”.

Casper Stornes
On training for Corkscrew Hill for the last few weeks in high altitude in Spain: “We found a similar hill in Sierra Nevada and we did specific sessions for a few weeks, 20 minutes of replicating Corkscrew Hill. We have done the same preparation for the race as we did last year.”

On whether they had a strategy planned before the race last year: “Yes, we did. In all competitions we (the trio) try to be together on the bike, as it is our strength. Last year we had this planned, to go the three of us together, but I went a bit earlier and Kristian and Gustav stayed in the pack a bit more and relaxed for a bit. I didn’t expect to win but I thought I could make a top 10.”

Katie Zaferes
On her sprint finish in WTS Bermuda last year: “I took some notes from Flora’s race here last year to try to improve my performance tomorrow. I am just going to race very aggressively. Hopefully I will have a good swim and I can push the bike from the start, and make people really work if they want to race with me.”

On her family competing in the Age Group Relay, against Flora: “My family, including my husband Tommy, are also doing the Sprint Relay. It is really fun and inspiring to have them all coming here to race, at their own level.”

Flora Duffy
On how training in high altitude can help preparing for Bermuda: “Last year I trained in Colorado, in high altitude, for three weeks before Bermuda, and I think it had an impact, it was easier when I came down to sea level.”

On her injury and when she expects to be back racing: “I injured my foot about this time last year, and I totally wasn’t expecting to be sitting on the sideline one year later like I am now. We all know that when we are injured we have months of torture ahead, but I just have to be patient and be positive. My plan is to be back racing in July but I don’t want to create too many expectations and put a date to my comeback, I have pulled out of enough races for the moment.”

On competing in the relay: “It’s really cool that I can do a relay with two people from other sports. I haven’t done a relay in years, and I don’t even know if my teammates have ever done a triathlon, but they are great athletes and I am sure it will be great to be out there racing with them”.

Coverage of the Elite men’s race gets things underway at 1pm local time on Saturday 27 April, with the women from 4pm, and you can watch the action unfold on TriathlonLIVE.tv, including exclusive pre and post-race interviews with the athletes and behind-the-scenes features. As ever, be part of the event and follow along on ITU social media channels with the hashtag #WTSBermuda.