by Chelsea White on 04 Oct, 2015 06:55 • Español
Ai Ueda (JPN) gets to add another Mexican city to her list of World Cup accolades as she was deemed victorious at the 2015 Cozumel ITU World Cup.

Ai Ueda (JPN) gets to add another Mexican city to her list of World Cup accolades as she was deemed victorious at the 2015 Cozumel ITU World Cup.

Showcasing an impressive come-from-behind run to make up time from being in the chase pack on the bike, Ueda was able to tally her first ITU World Cup win of the season. The win also gave her a second Mexican victory, after earning the gold medal at the Huatulco World Cup in 2014.

“I love Mexico! After the Chicago Grand Final, I did two weeks of high altitude training in Mexico City. The Mexican people are just very kind and they give me good support,” said Ueda of her second Mexican win. “I had good training, and when I came here I could hear the Mexican people cheering my name, so my motivation went up and today I had a perfect race.”

Joining Ueda on the podium was Rachel Klamer (NED) and Australian Erin Densham who sported the silver and bronze positions.

“When we started running, I honestly didn’t think I would even make the podium, I was just smashed. I thought I was going to blow out. I saw Ueda running and I was tempted to start cheering for her because she had such an awesome run,” said Klamer on her podium finish.

Densham added on her bronze performance, “I was really surprised because I have been feeling really terrible for over a month now, so I haven’t been able to do a whole lot of work. But to come out here and actually do okay, I am really happy.”

With the sky and sun as picturesque as the paradise island is famous for, the women kicked off the day’s competitions. The pontoon start for the swim led the athletes from the crystal clear ocean waters into the Marina Fonatur. Since the sprint distance swim only allowed for one lap, not much spacing separated the women in the water. Japan’s Yuka Sato was able to glide her way to the front and exit the water first.

Heading out onto the bike leg, the majority of the four-lap course saw a constant game of follow the leader. A group of 16 including the likes of Klamer, Densham, Taylor Spivey (USA), Lindsey Jerdonek (USA), Lisa Norden (SWE) formed and remained together with no change throughout the discipline.

A chase that was led by Ueda sat a good 25 seconds down, and despite efforts were not able to make up any time as the women headed into the second transition area.
Coming off the bike, Klamer and Jerdonek jump started the run and caught a break to allow them to lead for the first lap.

Also getting away from the peloton, six runners, which included Norden, Densham, Yuko Takahashi (JPN), Adriana Barraza (MEX) and Julia Hauser (AUT) huddled together through lap one. Although she had the large disadvantage on her, Ueda busted out a phenomenal pull to position herself to be among the six vying for podium spots.

Then once the bell sounded to signal the last lap of the day, Ueda proved that she can perform in the heat and ran herself away from the group, past Klamer and Jerdonek and into the gold medal position.

Following just 7 seconds behind, Klamer found herself the silver medal and her first World Cup podium since winning in Tiszaujvaros in 2014.

The bronze then went to Densham, who looked her strongest of the year. She earned her first ITU podium since 2012. 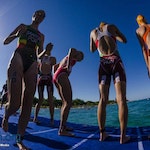 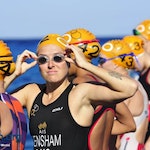 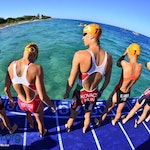 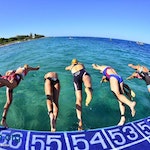 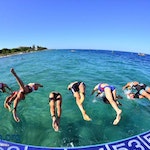 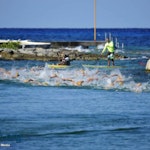 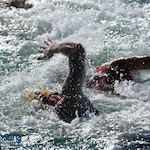 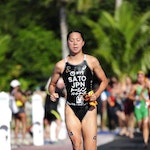 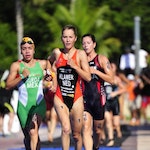 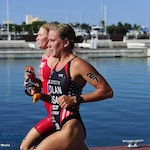 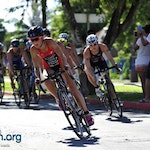 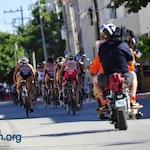