Reigning champions Mariko Adachi (JPN) and Yuichi Hosoda (JPN) each defended their Asian Championship titles on Saturday in Subic Bay. Adachi crushed the women’s competition, while Hosoda earned his third consecutive title in the men’s race in a tight battle.

Adachi stormed to the win, clearing the field by more than two minutes with a time of 2:14:17 for her second consecutive win at the championships and her third time medalling. Teammate Yuka Sato also repeated as the silver medallist in 2:16:38, while China’s Dan Fan rounded out the podium in 2:17:42. China dominated the top ten in the women’s race, with half of the group hailing from China.

Adachi executed a smart race plan to maintain pace with the leaders through the first two disciplines. But all bets were off when she put feet to pavement, as she wasted no time smoking the competition with the fastest run split of the day by more than two minutes. Teammate Sato couldn’t maintain the ferocious velocity, but managed to drop Fran to secure silver. Fan was then left to fend off her teammates Mengying Zhong, Yi Zhang and Lingxi Xin, which is exactly what she did to take bronze.

The men’s race saw a much closer fight for gold between the top three men, but it was Hosoda who dug deep to keep the Asian title. China’s Zhihang Jiang hung tight for a close finish, claiming second just six seconds later in 2:01:38 for his first podium at the championships since 2009. Ryosuke Yamamoto (JPN) cruised over the finish line in 2:01:52 to take bronze for the second straight year.

Chinese athletes led out of the water, followed quickly by pre-race favourite Hirokatsu Tayama (JPN). The men led a group of 14 athletes on the swim for nearly a four-minute advantage heading for the bike course. But all of that quickly changed on the bike when Hosoda and Shen-yen Hsieh (TPE) managed to power two minutes ahead of the leaders. Hosoda quickly dropped Hsieh, but failed to factor how strong Jiang and teammate Yamamoto were on the run.

The pair blasted to sub-38 minute splits, while Tayama was slowing ahead. Jiang was within striking distance when he ran out of course, as Hosoda crossed over just seconds ahead for the win in 2:01:32. 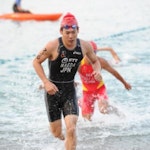 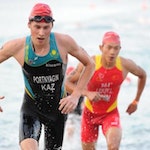 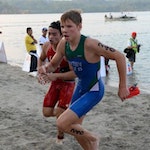 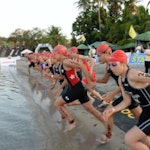 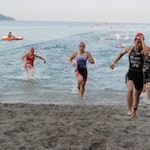 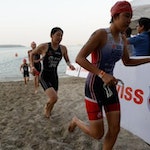 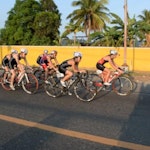 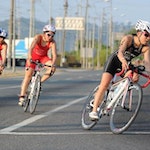 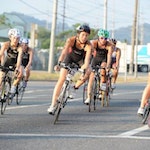 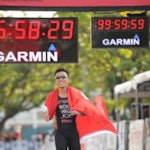 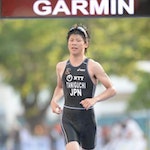 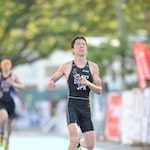