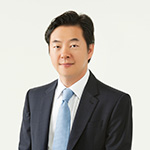 Mr. Park is currently Chief Operation Officer (COO) of Doosan Digital Innovation, which provides total IT technologies & services to Doosan affiliates worldwide. He has worked in various positions of the Doosan Group since the late 90’s, in the Seoul, Beijing, and New Jersey offices as a chief strategy officer in planning and change management.

The Park family and the Doosan Group have contributed much to the development of the Korean sports world. The Doosan Group owns and operates baseball, handball, and archery teams in Korea and has given rise to several Olympic medalists.

Since he was elected as a board member of the Korea Triathlon Federation, Mr. Park has been working closely with all KTF members to boost the triathlon up to next level by focusing on young athletes’ development.
The triathlon’s acceptance as one of the Korean National Youth games has had a positive effect on the development of young athletes. For example, KTF had only one school team at the beginning, but the number of team has increased to 10 so far. Mr. Park also created the Doosan-Changwon Children’s Triathlon to promote the triathlon to the younger generation and is currently supporting teenage athletes together with the Doosan-Yeongang Foundation to provide them with a better environment in which they can practice and develop their skills.

Currently, as the President of Korea Triathlon Federation and executive board member of Korean Sport & Olympic Committee, Mr. Park is working closely with government sports authorities and as the result of these efforts, KTF is providing ODA nations with KTF-ITU coaching programs in cooperation with ITU since 2017.

Mr. Park earned his Bachelor’s degree from Hanyang University and his MBA from the Stern School of Business at New York University. He enjoys running, skiing and traveling the world with his wife and two daughters.