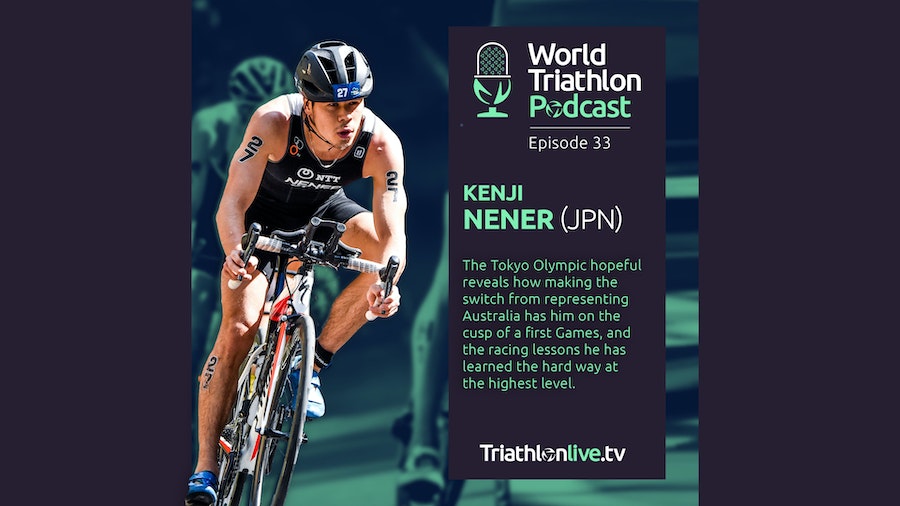 After racing with team Australia for many years, Kenji Nener completed the move to representing Japan in 2018. In the latest edition of the World Triathlon Podcast, he talks frankly about the dangers of overthinking in his racing, his admiration for the mental toughness of some of the sport’s greats he has witnessed up close and personal, and how he dealt with the disappointment of missing out on a possible podium in Karlovy Vary last year. Listen in full below or on Apple, Google and Spotify.

“I grew up in Western Australia, but I moved across when I was 17 to train with Chris Lang initially. So he was based in Queensland and at the time he was coaching Brad Kahlefeldt and Emma Moffatt. Emma Moffatt, Emma Jackson, they’re phenomenal athletes. They’re extremely regimented, extremely determined. And you know, they’re awe inspiring. From a young age, I was very lucky to see what it took to be something like them. Emma Moffatt to me was something phenomenal. She, she was so mentally tough. Same thing with Emma Jackson. I’ve only ever really seen that in, in someone like Kristian Blummenfelt or Gustav Iden. They’re just so headstrong. It didn’t matter what session it was, they rocked up and they gave it a hundred percent.”

“It was just amazing to see the determination, the resilience, the mental fortitude. I think a lot of athletes, nowadays especially, have the potential to be at least in the top five in the world, but I think what separates the top 20 to the top five is the mental amplitude. A lot of great athletes, whether outside of triathlon, running, whatever sport they always have this drive this hunger, and it must’ve been instilled from a young age, maybe they had an experience of winning and they just never wanted to let that go.”

Nener has been using meditation and visualisation to help him achieve the clarity of thought he feels makes the difference at the highest level.

“Up until I probably left to Japan, I over-thought situations. I would try and almost calibrate how I would need to prepare in the race or like how small or subtle changes would influence the dynamic. And I would try and almost formulate a way to optimise my performance based on those changes, but I was overthinking and of course mental energy, as many people know, probably consumes more energy than physical. And I would overthink, and if it didn’t go to plan - and triathlon has many variables - then that would get my head unstuck.”

“But the more that you’re able to bring yourself in and let go of your emotions and accept - the biggest thing is to accept the situation. Don’t reject it. And once you’ve accepted the situation, then you think about what you can control rather than reject.”

Kenji goes on to reveal how he felt and responded to his first experiences at the World Triathlon Series leveI.

“I definitely remember that the first 5km off the bike was good. But then after that, it was awful to be honest. I mean, that was my capability at the time. And I have to accept that. I had a solid swim but unfortunately I didn’t quite make the break at the front, but the pace was definitely hot that day. I remember that Alessandro Fabian came back to our group and I was thinking, ‘well, if he’s back then it must’ve been cracking at the front’.”

“I’m very excited to see someone like Vincent Luis absolutely dominate it to be honest, I’m happy for him, but it shows that I have a lot of work to do, and then the rest of the world does to some extent.”

Nener was right with Luis in Karlovy Vary as part of a small group heading into T2 when disaster struck and a coming together with Hungary’s Mark Devay ended his race. It is still a raw moment for him.

“But unfortunately that incident happened and that’s something I can’t control and that’s in the past now, so all I can do is basically be better than what I was at that at that point of time. And I know it’s in me.”

“It was extremely tough for a couple of reasons. The first one was of course, potentially the race of my life had just gone out the window. And then the second was, I didn’t really have that many scratches as such, but my wrists, both were shocking. And It took me the flight back to Japan in order for me to get my head straight. And then once I started training in my home environment, I felt more comfortable. And then I started believing in myself a lot more, but it’s amazing how you could go from basically your best ever performance to thinking that I have no place here.

“I had the hunger to win that day and I have to find that hunger to win every day, because ultimately that that’s the defining difference. That’s all it is.”