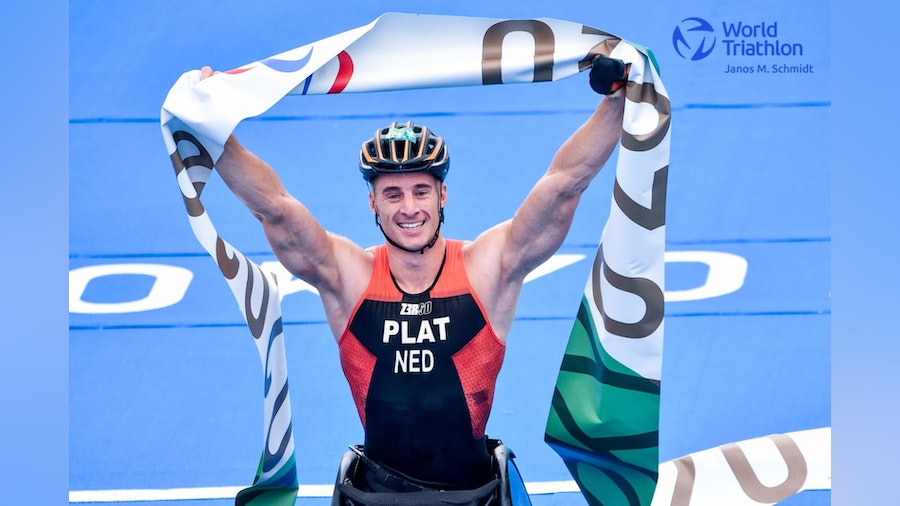 Dutch Para triathlete Jetze Plat knew he was the one to beat in Tokyo. Barely undefeated in his career, he is a force of nature. Paralympic gold in Rio 2016, five-times World Champion and after another display of magnificent form, he stormed the PTWC Men’s field to claim his second Paralympic gold in Tokyo. Austrian Florian Brungraber finished in the second place, while Italian Giovanni Achenza grabbed the bronze medal, the same one he got in Rio five years ago.

The ten best PTWC athletes of the world lined up in Odaiba Bay this morning ready to crown the Paralympic champion, and all eyes were set on one person: Plat. Five times world champion from 2015-2019, the Dutch has been unbeatable in the last seasons, but arrived in Tokyo with the uncertainty of how the extreme heat and humidity will affect his performance. With the water in Odaiba Bay slightly over 30 degrees, it was Australian Nic Beveridge who took the lead in the swim segment, followed close by the Rio 2016 bronze medallist Giovanni Achenza.

A lead that both maintained during the swim to then mount on their handbikes with the Italian on the lead. But behind them, Platt was a man on a mission. The Dutch showed tremendous bike skills, especially in the 180 turns with the handbike at really high speed, moving his body to facilitate the turns. Achenza, still leading after the first lap, was struggling with the turns and in less than two laps, Plat was already on the lead.

From that moment, the rest of the race was just a show of grit and determination, that never stopped until the Dutch crossed the finish line slowly, enjoying the moment and waving to the small crowd of coaches and athletes.

In the other race, for the rest of the podium positions, a bad swim from Plat teammate Geert Schipper left him out of the podium positions, while Austria’s rising star of PTWC Florian Brungraber showed impressive skills with the racing wheelchair to climb to the second place. Behind him, Achenza showed grit and determination to hang on in the third place, the same one he got in rio 2016.

It was Schipper who crossed the finish line in the fourth place, followed by France’s Ahmed Andaloussi o close the top five positions.

“I just had to win here. It didn’t really matter to me in what time I would finish or what the difference with others would be. Before competition everyone always thinks that I will win easily. Of course that worked out, but this is such a difficult sport in terms of all the material you use, possible penalties and things that can go wrong and all that. I knew I was in shape physically, and I just went all out. I will compete in the cycling road time trial tomorrow, so it was important for me to try not to waste as much energy”, said Plat after crossing the finish line.

Also incredibly proud was Bryngraber, first medallist in para triathlon of his country. “I didn’t expect this before the race. I hoped I could do a brilliant race today. It all looked quite well for me the last couple of days ahead of the race to do a good job today.I only hoped that I wouldn’t make mistakes during the race, and it seems that it worked. It’s amazing for me”, he said.

“I feel reaffirmed, because I have won the bronze before at Rio 2016, but do it again now, when am 50 years old…” said Achenza, one of the oldest para triathletes in the circuit.  He doesn’t seem to be close to retiring, though. “To compete at 53 un Paris 2024 would be quite a feat, but since I got bronze today, why not? Let’s try it again,” he explained.