Spirig sprints to win in Cartagena

With climatic conditions cooler than anticipated and featuring a 1.5km swim that involved a run across the sand to the starting beach, Spain’s Carolina Routier took an early lead out of the water, followed by Summer Cook (USA) and Anastasia Abrosimova (RUS).

Cook grabbed the lead on the first lap of the bike but fell behind on the second lap, with Line Thams (DEN) leading Findlay and Celine Schaerer (SUI). Anja Knapp (GER) stole the lead on lap three, with Verstuyft in second ahead of Thams.

Spirig surged into the lead in lap four, with Findlay steadfastly holding onto second ahead of Lisa Perterer (AUT), but had slipped back to fourth place in the sixth lap only to clamber back to second place behind Knapp at the transition to the run.

The 32-year-old Swiss triathlete and gold medallist at the London 2012 Olympics saw a strong challenge from Findlay, who took the lead in the second lap. But Spirig was able to sprint to a win, notching up her second win in as many weeks, having placed first in Cozumel earlier this month.

She won despite suffering from a suspected sting, and for which she received medical attention after the race.

“I just felt something hurt, it could have been on the bike or in the ocean. It certainly wasn’t a bee, but it was huge,” she said.

“My swim was really good. I felt really bad at the beginning of the run, so I don’t think it affected me. It wasn’t the perfect race but I won and that’s always amazing. But it wasn’t easy. I just hung on and it got better and better. It was great to win again.”

Findlay finished second after a consistent pace, but was unable to find the strength for a late surge.

“I just needed that extra speed at the end that I don’t have yet. I didn’t have such a good swim, but I felt in control. It was overcast and early so there was no time for it to heat up, so we had really good conditions.”

The swim implied an entrance and exit from the water from different beaches, and a run across the sand at the first lap, which Findlay described as fun and an interesting format.

“It’s good to be able to see what position you’re in,” she said.

Verstuyft finished third, a relief after a difficult year.

“I’ve had a difficult season so it’s good to finish on a high. I knew I was good so I just had to prove it in the race,” she said.

Lindsey Jerdonek (USA) crashed on the first corner on the bike, badly grazing her thigh, and retired after one more lap.

“I came all the way down here and I wanted to get more race experience out of it, so it’s good I did one more lap. I went a little too fast and it was slippery. I was in too much of a hurry.” 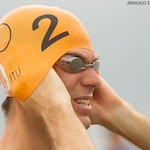 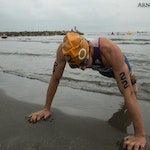 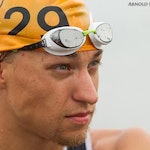 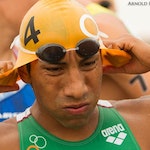 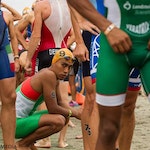 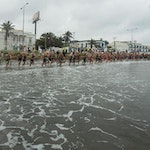 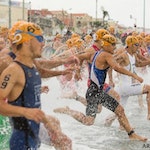 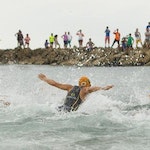 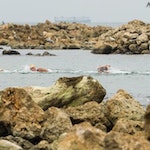 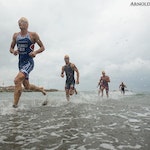 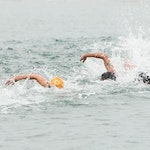 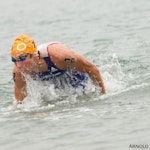