by Erin Greene on 23 Aug, 2014 03:48 • Español
The USA's Sarah Groff pulled off her first ever World Triathlon Series win just seven days ahead of the Edmonton Grand Final at the World Triathlon Stockholm. The win saw Groff jump from...

The USA’s Sarah Groff pulled off her first ever World Triathlon Series win just seven days ahead of the Edmonton Grand Final at the World Triathlon Stockholm. The win saw Groff jump from fifth to second in the rankings behind compatriot Gwen Jorgensen.

“It was fun racing,” Groff said. “I felt a bit like a spastic monkey on the bike once the rain came down. Those girls were great, they kept the pacing going. I went off the front and just tried to hang on on the run because I knew there were some speedy legs behind me.”

Behind Groff, New Zealand enjoyed a phenomenal race with Andrea Hewitt stepping on the podium for the first time this year in second next to teammate Nicky Samuels in third. The bronze was Samuels’ first time making a WTS podium.

“Yea, I was so happy,” Hewitt said. “It’s been three years since my last podium - a lot of time. Today was so hard, I just kept pushing and pushing and then sprinted up the hill.”

Starting with a chilly one-lap 750m swim, Groff asserted herself as a medal contender straight away when she positioned herself just behind Great Britain’s Lucy Hall. As the pack thinned out, Hall led the women out of the water and up the hill to transition.

But it was Groff who crossed the mount line first, followed by a powerful pack of cyclists. With another 10 riders in tow, the ladies set out to distance themselves from the field, which included Hewitt, Samuels, Kirsten Sweetland (CAN), and Lindsay Jerdonek (USA) amongst others.

Behind them, the formerly second-ranked Jodie Stimpson (GBR) struggled out of the swim to miss both the lead and chase group on the bike. She rode solo for much of the five-lap 20km course in hopes of bridging up to maintain her No. 2 ranking.

But the leaders were just too strong, with the pack working together to increase their advantage again and again as they passed in front of the grand stands. Groff dropped off her bike and hammered out of T2 just steps in front of Anja Knapp (GER) and Jerdonek.

Jerdonek followed Groff for an early break on the two-lap 5km run over centuries-old cobblestones, but Jerdonek was soon overtaken by Sweetland, Samuels & Hewitt. The Kiwis and Canadian ran shoulder to shoulder on the final lap, jockeying for the two open podium positions.

While they kept Groff in sight, she was too powerful in the end as she cinched up the win in 1:03:00. In a final kick, Hewitt crossed over four seconds later in front of Samuels, who took the bronze.

Groff’s win now puts her 55 points ahead of Stimpson in the Threadneedle rankings headed into the World Championship title race next Saturday. 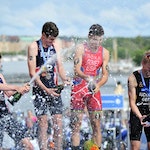 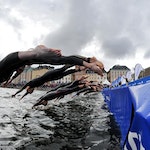 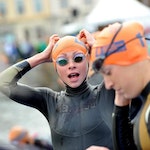 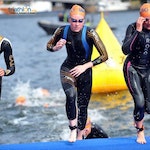 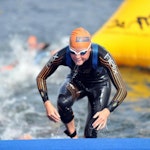 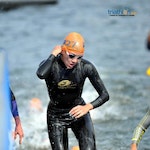 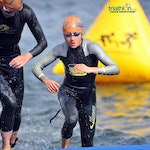 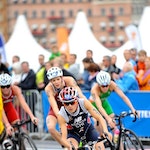 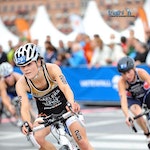 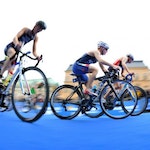 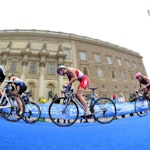 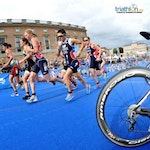