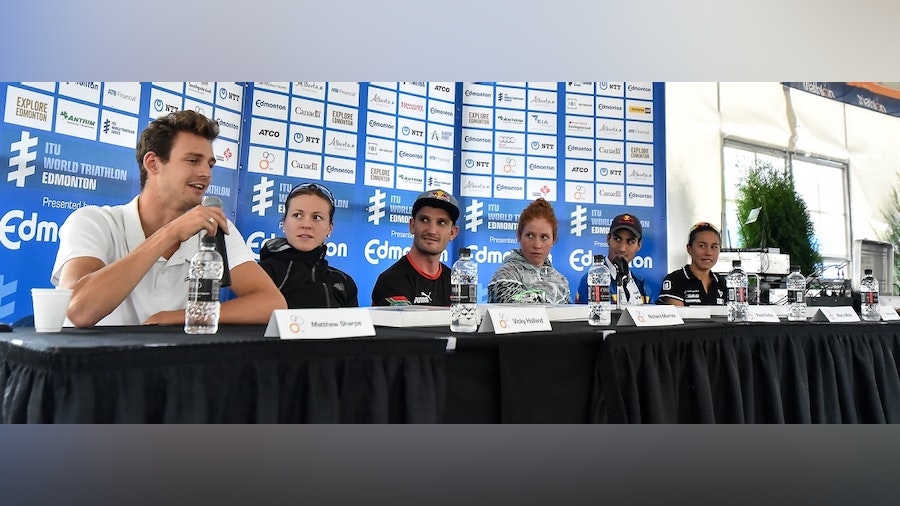 With one final World Triathlon Series race before the Grand Final in Cozumel, anticipations are high as elites try and collect as many Series points as they can. In preparation for Edmonton’s swift sprint course this Sunday, athletes Paula Findlay (CAN), Mario Mola (ESP), Vicky Holland (GBR), Richard Murray (RSA), Andrea Hewitt (NZL) and Matt Sharpe (CAN) spent a little time with the local media to discuss what everyone can expect ahead of the weekend.

Findlay
How does it feel racing in your hometown? “Yeah it is really fun to be back and home racing. The last couple of years I have been injured, so every time the race was here I was unable to compete. But it is exciting to be able to line up and have all my friends and family watching, it is really difficult to get into race mode when you are staying at home and my friends are around and I can catch up with my family when I have not seen them for most of the year. But it is also kind of a positive distraction so that I am not constantly thinking about the race and being really nervous about it. I have trained on this course since I was younger, it was the course where I trained cross country with the University of Alberta. So it is really fun to come back to this and race a course I am so familiar with, it is exciting!” How did you plan out your racing this year between the Olympics and the WTS Series?
“Well at the beginning of the season we wanted to race every race to make the most of it and having the Olympics, obviously that was a special one. But I never spent too much energy on it or focusing too much on it, but just taking it as another race, knowing that the result could be what we were working for or not. At the end it was not a bad race, I would have wanted to fight for more, but races are this way. But yeah I have been in Edmonton for the last two weeks trying to keep the focus on training for the race, because it is time to go back onto the line and give our best.” How do you prepare to race in extreme conditions, while Rio was extremely hot, Edmonton is extremely cold.
“I think because it is an Olympic year, everything is all focused around that race, so all of our preparations really have been all about Rio. That obviously paid off for me on the day with the medal, that was everything that we were trying to achieve. Coming here I wanted to carry on in the Word Series because I have been in really good shape, especially with the Olympics, so I thought I might as well try to use that because it took quite a long time to get that fit. I didn’t want to lose it straight away and not use it. But in terms of preparing for the specific conditions of Edmonton, that has slightly fallen by the wayside, in the fact that the Olympics was just more important I guess.” How have you managed the back luck you have faced recently? (breaking your collarbone, racing here last year with a borrowed bike).
“Yeah I mean obviously it is inevitable, this stuff is always going to hit the fan at some time. But it shows good character on how you pick yourself up and how you move on. I think a lot of people can obviously relate to the problems that I have had. When I broke my collarbone I thought I must be the only person to have done so, but then I had a couple thousand people message and tell me that it has happened to them. I wouldn’t say that it has made it an exciting year, but a challenging one. So yeah, I have had to deal with a lot of things this year, but that has made it exciting and I would say enjoyable in the end.” You arrived in Edmonton a couple weeks ago, how has your stay been?
“Yeah we came straight here from Rio, and we stayed quite close to the West Edmonton Mall, so I seem to know my way around here. Yesterday we got to go on the waterslides and that was a lot of fun. It is a beautiful place to train and the weather has been quite good during my training so I am not sure what Sunday is going to bring us.”

So knowing that you are very comfortable with the course and the conditions, how do you think you will do on Sunday?
“Well I had a good race here two years ago. So yeah I am just thinking about that, because you have to go into it thinking you will always have a good race here.”

Matt Sharpe
Now that Rio is over and we look forward to Tokyo 2020, where do you see yourself in the next generation of Canadian triathletes?
“Yeah, for me this year it is kind of funny but I never really had a plan. I know that sounds bad, but basically I have been racing and every race that I have done I have thought that it went alright so I would move onto the next one. So I think that maybe that is how it is going to go moving forward. We will race, try and do well on the day and then whatever comes from that we will just keep going. So Tokyo 2020 is a potential, but I am just trying to stay in the moment right now.”