Just like the London 2012 Olympic Games, the top spot of the podium at the ITU World Triathlon Yokohama came down to a phenomenal sprint finish.  But this time Sweden’s Lisa Norden would not be denied gold as she edged out Germany’s Anne Haug at the finish line to claim her second straight victory in the 2012 ITU World Triathlon Series.

“It’s the first major event after a couple of races that I did and I am getting into very good shape,” said Norden.

“Coming to Japan with such a nice atmosphere and getting very well welcomed is so important for me. Maybe it is the sushi that works of my favour,” she joked.

After running in the final leading group with a number of World Series and World Cup winners, it was rising Dutch star Maaike Caelers who grabbed the final spot on the podium.

After a few days of strong winds and choppy waters, the elite women were greeted by glorious conditions with sunshine and very little wind.  U.S. Olympian Sarah Groff was in front early but surprisingly Rachel Klamer led the women out of the water and into T1.  She was followed closely by Groff and Emma Moffatt.

Three distinct packs formed early in the 40km bike course, including 19 women in the lead pack.  They were pursued by a chase pack of nine which included a number of stellar runners including Haug, Barbara Riveros Diaz, Ashleigh Gentle, Gwen Jorgensen, and Mariko Adachi.

A further 90 seconds behind that group were Ai Ueda and Felicity Sheedy-Ryan who were facing a two-minute deficit.

The leaders began the bike with a 50-second lead, but the group’s reluctance to work on staying away from the chase, coupled with Haug’s relentless tenacity on the bike, resulted in a big group of 28 women riding together at the beginning of the fourth lap.

The group did lose a woman as Jodie Stimpson suffered a flat and dropped back, first riding solo and then joining Ueda and Sheedy-Ryan.  With Stimpson in that trio, the group managed to whittle the gap down to a minute and 25 seconds by the time they hit T2.

The battle for the podium was ahead of them and early on the flat 10km run course, a group of seven women emerged at the front.  Among them were Norden, Haug, Moffatt, Caelers, Gentle, Riveros and Densham.

The Chilean Riveros was the first to drop off the pace, leaving the remaining six to battle for the rest of the run.

Gentle and Moffatt both pushed the pace and traded the lead as they passed the midway point of the run while Norden waited for her moment to strike.

Norden and Haug entered the long 240m finish chute together and began a furious sprint to the line.  Haug broke away first but Norden quickly caught up, seizing the lead and never relinquishing it as she hit the finish tape first in a time of 1 hour, 59 minutes, and 7 seconds.  It was her second title in Yokohama after taking the title in 2009.

“(This) was a mixture of the Olympics and Yokohama 2009. In the Olympics the coach told me to sit and wait for someone to start the sprint,” said Norden. “In Yokohama 2009 I went really early and I felt very good and I thought that this time maybe I could avoid coming down to sprint and before the last turn. I went really hard hoping to get a gap so I could then relax a bit on the finish line but my training partner Annie who was with me and she put the pressure really hard all the way and I was pushing and pushing to get first.”

Haug picks up a silver medal and her first trip to the ITU World Triathlon Series podium after finishing fourth in three earlier WTS events earlier this year.

“It was almost a perfect race and the podium has been a dream for me and finally I reached the season and I am more than happy,” said Haug.

Caelers continued her breakthrough season, scoring her second straight WTS podium after taking silver in Stockholm a month ago.

“I felt so amazing,” said Caelers. “I am so surprised this year. In the beginning of the year I was nobody. Nobody heard of me. It’s awesome. I don’t have words for it.”

Densham retains her lead atop the ITU World Triathlon Series. But with the victory Norden pulled within 30 points, ensuring an epic showdown for the world championship at the Auckland Grand Final. 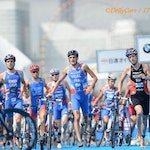 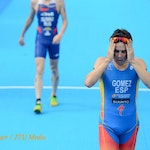 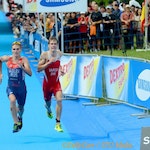 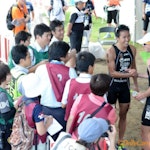 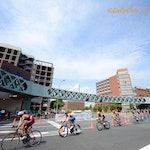 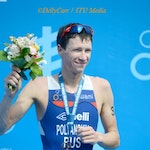 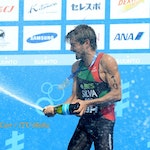 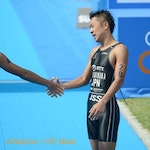 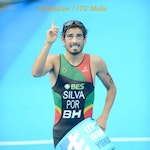 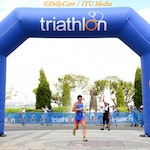