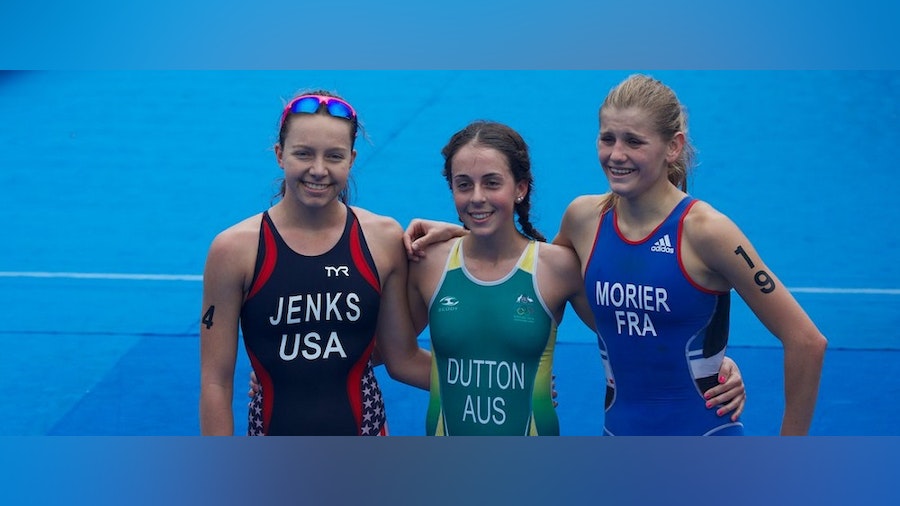 For a full view of the Junior course, click here

. The eyes of the triathlon world will be focused on Edmonton, Canada this week as the 2014 TransCanada Corp. World Triathlon Grand Final swings into action. Our future Junior triathlon stars will feature on day one of triathlon racing on Friday with the men and women racing for glory over the sprint distance course 750m swim, 20km bike and 5km run.

Also taking to the course on Friday will be our Age Group Sprint Triathlon competitors, the first to race for triathlon medals.

Women’s Preview
The women’s race is shaping up as one of the showpiece events of the week with so many talented ladies lining up for three medals.

Australia’s Brittany Dutton comes into these World Championships as the in-form athlete off the back of her gold medal performance at the Youth Olympics in Nanjing two weeks ago. Dutton continued Australian women’s outstanding success in major games.

A brave solo breakaway on the bike set Dutton up for the win despite a strong finish from USA’s Stephanie Jenks. Jenks will be forewarned of Dutton’s bike strength and will need to stay alert to ensure she stays in contact and give herself a chance of the gold medal she narrowly missed in Nanjing. Likewise, Dutton is aware of Jenks’ incredible run strength off the bike & will want to break away again to ensure she keeps the gold medal in sight.

The big threat in the field is Ditte Kristensen (DEN) who will compete for the final time as a Junior and one she wants to be memorable. Kristensen has amassed an impressive list of titles since her debut into triathlon in 2010. A multiple national junior champion and European Cup winner, she finished just off the podium in the ETU Championships but grabbed a bronze at the ITU World Cup in Jiayuguan in July. She comes to Edmonton in great shape and sure to feature among the medal contenders.

The French women Audrey Merle and Cassandre Beaugrand will be very competitive and be in the mix for the medals. Both ladies were a part of the silver medal winning World Championship Mixed Relay for France. Like Jenks, there presence will be felt on the run.

Men’s Preview
Australian teammates Jacob Birtwhistle and Daniel Coleman headline a quality field of 70 athletes from 30 countries that will vie for triathlon glory in the Junior men’s race with ambitions of racing in Rio in two years.

“Getting to the Worlds is the goal for me for the season and it will be good to get there and give it another crack,’’ he said.

Coleman is also a young man making his name known with consistent performances at major races this year, finishing third at the PATCO Pan American Cup and OTU Oceania Cup in Mooloolaba this year.

France have sent a full strength team headed by Raphael Montoya who finished fourth at the Junior world championships in London to countryman Dorian Coninx who won in a dramatic sprint finish.

It took all three medallists last year to post sub 15-minute splits for the five kilometre run and the quality of this field and fast course could see that benchmark matched.

Jorik van Egdom (NED) will be a real contender if he can get out of the swim in touch of the leaders. The 2013 Junior Duathlon World Champion as well as a former Junior Cross Triathlon World Champion can produce a lightening fast run leg and will be dangerous if he’s anywhere near the front on the run.