Highlights of the 2012 Junior Women Race in Auckland

The day of World Championship races opened with a bit of triathlon history and a tale of redemption for Japan’s Fumika Matsumoto.  The pint-size junior dominated torrid conditions to claim her place in history in Auckland on Sunday, pulling away at the top of the finishing straight to claim the 2012 ITU Triathlon Junior World Championship.

Matsumoto surged ahead of France’s Leonie Periault and the USA’s Tamara Gordon with less than 100 metres left to become the first Japanese ITU World Champion across the elite, U23 and junior levels.

Matsumoto said afterwards she was driven by a poor performance in the same race at the world championships in Beijing last year, where she was lapped and failed to finish.

“I can’t believe it, I’m so happy,” she said. “Last year in Beijing I was very very disappointed, and I worked very hard for the past year to avenge last year and I did my best today.”

The day started with another wetsuit swim, and the Netherlands’ Maya Kingma exited the water first and formed a small breakaway with Portugal’s Luisa Condeso, Russia’s Anastasia Gorbunova and Gorman.

But a group led by defending junior world champion Mikayla Nielsen (NZL) and that included Sophie Coldwell (GBR), Maddie Dillon (NZL), Georgia Taylor-Brown (GBR), Matsumoto and Periault helped reel them in and form a big lead pack of 23 at the end of the first lap.

But with the pace increasing at the front, that group shrunk to 16 by the halfway mark of the 20km bike, as Canada’s Amelie Kretz, Germany’s Sarah Wilm and Suse Werner and Matsumoto all took turns at the front to put time on the chase.

That group stayed intact until the start of the run which set up an impressive battle, given it contained five 2012 junior continental championship medallists and the defending champion in Nielsen. But Nielsen fell off the pace and eventually did not finish, and instead it was Gorman, Wilm, Dillon, Periault and Matsumoto who quickly assumed the lead.

At the start of the second 2.5km lap Dillon made a break and managed to stay a few metres ahead of the pack before Periault reeled the Kiwi back in with just one kilometre to go, bringing the other four back with her.

In the final few hundred metres it was the 2012 Asian junior women’s champion Matsumoto who showed her strength, easily striding away from the field to her and Japan’s first world title. Strong runs turned out to be the biggest asset of the day, as the three medallists also recorded the three fastest run splits for the day. 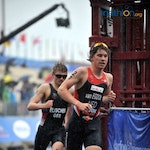 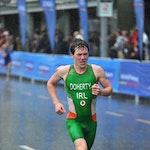 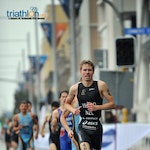 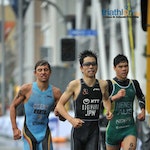 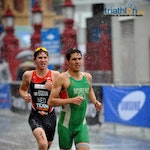 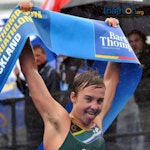 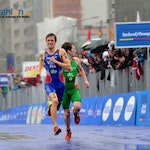 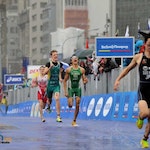 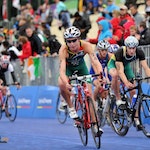 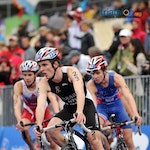 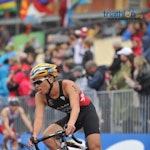 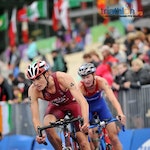