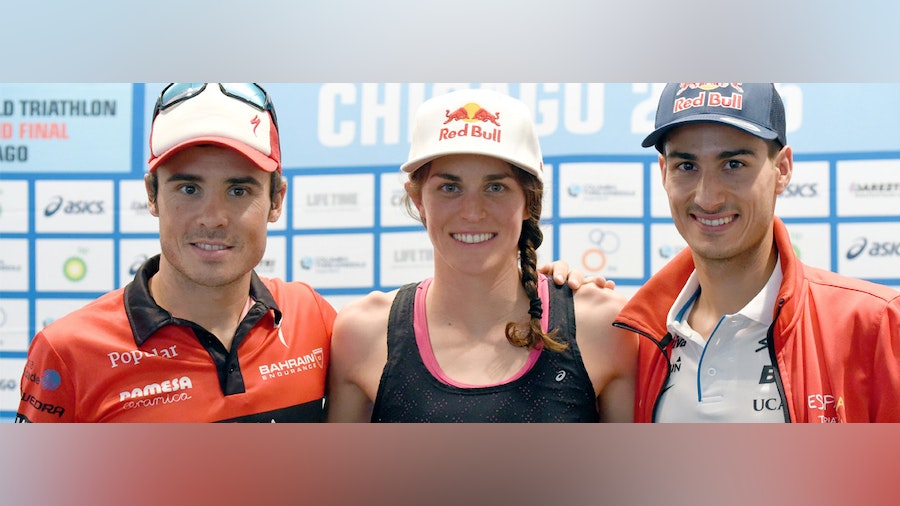 The 2015 World Triathlon Series has been fast and historical, and as the Chicago Grand Final gets underway with the paratriathlon and elite races on Friday and Saturday, the Series finale will most likely be one that the triathlon world will never forget.

But before all the action-packed racing begins, some of the star paratriathletes and elites sat down with some media to chat about the season and the World Champion event to come. Mario Mola
What can you contribute the Spanish team success to?
“I don’t really know, but of course hard work. I think one of the main things is at least for the young athletes like me, I can follow the great athletes and have them very close. I think for any athlete who is starting, who is trying to be as good as the elites are, it is great to have them close. Which is one thing that I think has changed going into the next Olympics, having someone like Javier, if you want to be like him, you can expect to follow things that he does as best as we can. And he is human, so why not try to be as good as he is?”

Talk about the technical #WTSChicago course
“If you look at the course profile, it doesn’t look any different to a flat person, but those 180 degree turns lap after lap make a huge impact on the bike and then on the beginning of the run. So we will try to be as smooth as we can on the course and use less energy. We know that it is going to happen, but we have to beat it.” Gwen Jorgensen
On the commitment being away from home for so long to train…
“Well I think a big thing that Jamie has taught me is that we say it is not a sacrifice, but an investment in our future. In 2012 I sat down after the London Games with my husband and we decided what we can do to change. We saw that people were investing in daily performance environments, so we researched some training environments and found Jamie Turner and the Wollongong Wizards, so that is when I switched and started training with them. We leave December 31st and don’t come back, I mean this week is my first week back on U.S. soil since 2014. So it is good to be back.”

On not taking anything for granted this season, despite so many victories…
“I was extremely nervous going into the Rio Test Event. It was something that I had been working towards since London in 2012. So at the beginning of this year, we knew that that race was going to be the trial for Team USA to get to the Olympics so I told my coach and husband that ‘look if I don’t do anything else this year but qualify for the Olympic team then it will be a successful year in my eyes.’ I think they both laughed at me a little bit because they know how competitive I am and probably rolled their eyes and said no, you probably won’t be satisfied if that is all you do. But that was always what my goal was.”

On being a known U.S. female athlete and role model for young girls…
“Yeah it is really exciting. I had gotten a couple emails this week through my website of kids from back in school doing profiles of athletes and two different moms sent me pictures and showed me that these kids were writing about me. So it is really cool to think about that, and is also cute and motivating at the same time. So if I am able to help and motive kids to get active and potentially begin in the sport of triathlon then that is great.” Javier Gomez Noya
On talking about your career since winning the U23 World Championship in 2003…
“My career was not easy at all. Obviously 2003 was a very important year, winning the Under23 World title. It was my first year in Under23, and I didn’t know anyone and I just raced and did the best I could and luckily I won, so it made me think that I could have a career in this sport and that I could do well. The Olympic Games were the next year and I wanted to qualify, but unfortunately I had some issues with the federation with a heart problem where they didn’t think it was safe to race triathlon, so that took me out of the sport for pretty much a year and a half of the competitions. But I kept training and it resulted in being nothing serious and that I could keep going and have the career that I am pretty proud of up until this moment. I really enjoy what I am doing.”

On the drive for five World Championship titles…
“It is an honour. The fact that I can do that already is just amazing. To have four World titles and seeing all of my old rivals being inducted into the Hall of Fame and I just used to race them three years ago, it is really good. It means that I had a good career and of course to win my fifth World title I think since this is the biggest race of the year, I am not going to think about finishing first, second or third and my ranking, I am going to go out there to win the race—the same thing that I do with all of my races. We will see how it goes. Unfortunately, the guys that are stronger will make it very difficult, but it has been a great year so far. I like this course so hopefully we will have a good one.” Michellie Jones
On being back competing in a World Championship…
“Katie has an amazing story, she really only started racing in paratriathlon in February. Since then we have had a great time together. Before Chicago we have worked on trying to master the tandem, so we have done that for a few weeks. But we are really excited, I love a World Championship. I have a great record, so no pressure Katie. But on race day, anything can happen and for us ultimately the goal is to get to Rio, and for me it is especially cool to try to help someone get there, because I know what it is like, so to be able to give back to the sport is always exciting. And that is where I think my motivation comes from. I can help Katie with her dream.”

Katie Kelley
On how the team with Jones came together…
“Well I had always done triathlons, I also did ironman and marathons, so I came from a running background. I am in the deaf/blind classification, when I was 25 my eyesight started to deteriorate so overtime I made adjustments with different guides. Then this year in January, I was leading the blind so people were asking me if I would compete as a paratriathlete for Paratriathlon Australia because my times were pretty good. Then my coach said they were still looking for a guide for me, then two weeks later he rang me up and told me Michellie Jones was going to be my guide. I was there at the Sydney Games and knew the world country of Australia knew Michellie Jones. I thought my coach was kidding. So when I am riding the bike and I am looking at Michellie Jones butt and think, I can’t believe I get to do that! So for someone like me who loves the sport and get this opportunity and especially with Michellie as my guide—it is just incredible.”

Lauren Steadman
After growing up as swimmer, how has the transition been into triathlon?
“It has not been the easiest transition. Being a swimmer you just are in the pool and doing laps and laps, so I had issued getting shin splints and dealing with all of those injuries that come with that. But I did two Paralympic cycles with swimming and I loved it, I still swim but it is a completely different environment being in the water for racing. I use to race for a minute, and now I race for over an hour, so there is quite the bit of difference. But over the year with the help of British Triathlon, my biking has come on, my running has come on and the competition is good. When I am in my home country and racing National Championships, I still race the best in the world. So it has been a fantastic transition as well.” Melissa Stockwell
“When it was announced a few years ago that the World Championships were going to be here in Chicago, it was like Christmas in July. It was really exciting, and now we are just a few days from it. Soon after that announcement was the announcement that paratriathlon was officially going to become a Paralympic sport, so the excitement level for being in this sport and all our journies to Rio and dreams of hoping to be there, it is going to be a good race on Friday. I am here in my own backyard, I get to swim in the lake I swim every week, bike and run with the epic skyline of Chicago among some of the greatest athletes in the world. Plus being from Chicago and having my local family and friends and organizations like Dare2Tri and knowing they will be honoured when they are cheering me on will be pretty amazing.” On racing in Chicago…
“It’s just nice to be here as a part of this amazing field, racing with world-class athletes and 1,000 U.S. athletes. I’m hoping I can qualify for the Paralympic Games. This weekend is more important right now. I think I’m prepared very well for it. I’m ready for a big event. My competition is tough, but I’ll do my best out there and I’m honored to be a part of it.”