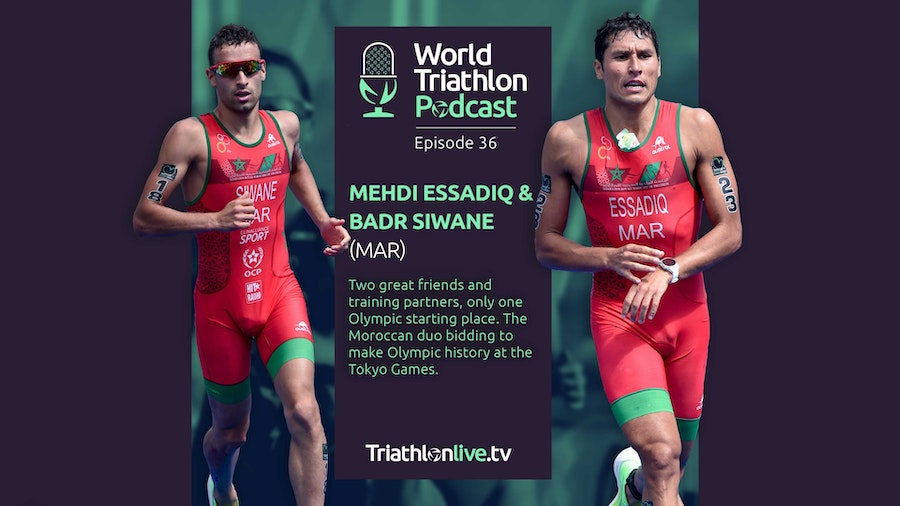 Mehdi Essadiq and Badr Siwane are training partners and friends on a mission: to be the first triathlete to represent Morocco at an Olympic Games. The duo have lived together, raced together, competing and co-habiting in friendship and pushing one another every step of their triathlon journeys.

But as the qualification period for Tokyo start places gets underway later this month, just one New Flag place is available for one of the two men. And just one place currently stands between them on the Olympic rankings. You can listen to the full interview in the latest edition of the World Triathlon podcast on Apple, Spotify and Google.

—
“It’s like training with my brother,” says Badr Siwane, “but it’s very good. This was the first year that we spent so many winter training camps together and we spent a long, long time together in Rabat.”

“This was the first year that we really trained together for the final a countdown and, yeah, we spent a really good time together,” adds Mehdi Essadiq. “I think we help each other, even if there is this only one place for both of us, we can forget this and try to help each other and try to get better and to represent Morocco in the Olympics in the best way possible. That’s the goal.”

Essadiq is eight years older than Siwane, and has already come tantalisingly close to making triathlon history for his country. London 2012 preparations were on track until he went too hard too early in Mauritius and jeopardised qualification, while Rio 2016 was just a few places out of reach in the overall rankings.

“I didn’t need a great result, I just needed to finish the race. And I was really prepared, I was in front in most of the races. Henri Schoeman was there at the start of his career so I swum with him and did a very strong bike with him, and after 3km of the run I couldn’t remember anything. After 9km I lost consciousness and woke up in the hospital.”

So whereas Siwane has been refining and working towards his first Olympic goal, for Essadiq, this campaign represents the final chapter of a fine career. “As a Moroccan triathlete, it’s very hard to have sponsorship and live with triathlon. And I’m a father and a doctor. I think it would be very hard to continue. It’s destiny, you know? If Badr is in front of me, he really deserves it.”

For the younger Moroccan, there was no doubt after his African Games gold medal that the Olympic Games was within his horizons and he was ready to dedicate his life to realising that goal.

“There was a moment, one day in the September of I don’t know what year, my dad came into my room and said ‘Okay Badr, what now, how serious are you with this?’ So I said ‘tomorrow I’m training very hard, and the next day and the next’. I’m following my road and my future and I’m going into every race to win.”

As hard as it might seem to have two friends working towards what can only be one successful qualification, there is no hesitation that whoever it is on the start line will have earned it, and will represent the country and help to mark a new era for the sport in Africa.

“We know before the race that one of us is going to be happy and one a little bit sad,” says Essadiq. But before, and after the race, you cannot see anything of this. We help each other and really want each one of us get better and better. They’re going to have the legacy of Moroccan triathlon. We have a big bunch of triathletes coming through.”