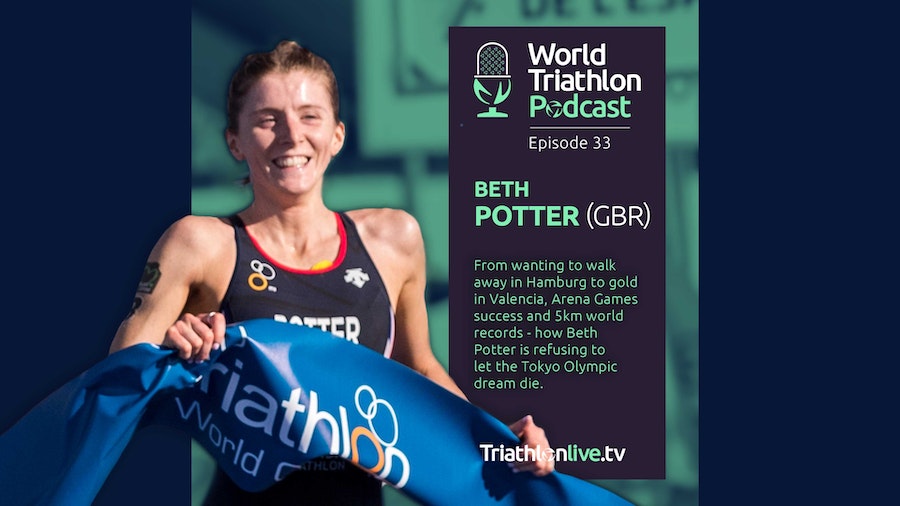 On the latest episode of the World Triathlon Podcast, Beth Potter (GBR) gives us the lowdown on a remarkable few weeks that saw a world record 5km time of 14.41 bookended with Arena Games gold and silver in London and Rotterdam. The Rio 2016 Olympic runner made the switch to triathlon shortly after those Games, leaving a teaching job in London to train with some of Britain’s very best in Leeds. It is a brilliantly honest look at the difficulties of making such a change and breaking into a sport that she admits she is still learning, and at the impact of her success Arena Games success. You can listen and subscribe on Apple, Google and Spotify.

—
At the end of March, the Arena Games in London saw Beth Potter revel in her competitive return to the pool, thrive on the virtual bike and master the curved treadmill, even if she was a bit disappointed by her virtual self’s apparent lack of comparable effort.

“As someone who hasn’t done many relays it was really nice to do some fast racing and to sharpen that top-end stuff. It’s been fun, just like a really hard training session. There’s no margin for error. For the run I was squinting at the screen and couldn’t really see the numbers that well but I didn’t feel like it looked like it was trying that hard. I was like, ‘you’re not going that fast, come on!’

The week after that golden success in London, Beth scored a headline-grabbing 5km time that will go down as an incredible PB but an unofficial world record, due to certain criteria for full recognition not being met at what was a relatively small race meet in the north of England.

“I kind of wanted to test myself to see because, you know, I just like to run fast, so I was thinking let’s just try and run a PB here, 15.15 would be really good. I wanted to be pushed all the way and I was, every single metre of that race I was pushed. To come away with 14.41 though honestly, I still can’t believe it. I’m still in shock that I’ve managed to do that.”

Disbelief was soon replaced by a huge buzz in the press and messages of congratulations from far and wide, including Rio 2016 Olympic Champion Gwen Jorgensen. The feeling was a long way from the pre-race uncertainty before the previous August’s WTS Hamburg.

“Actually after Hamburg, I didn’t want to do any more racing. I’d had a bit of a panic attack as I was walking onto the pontoon and I honestly nearly did a 180 and walked straight back off. I just didn’t feel ready. I’d only done two weeks in the pool but my coach convinced me to race and then to go on to Arzachena and that was really good. I had a positive result there so I wanted to do another one and then that (Valencia) went well too.”

So suddenly Potter was disappointed that the season was ending, but time off to reset helped further underline she was on the right trajectory. Having only made the transition to triathlon in 2016 when she moved to Leeds to train with the likes of the Brownlees, that confidence hasn’t always been so apparent.

“I gave up a lot to do this. I left a career in athletics, I left a full-time physics job and friends and people in London. It was a big move and it was definitely hard. People always told me it was never going to happen overnight and patience is not something I’m good with. But it’s been nice to see that progression every single year. And it’s almost like going back to being really young again making PBs all the time.”

“I was training in a squad with four Olympians, it’s a high bar, but that’s the thing. If you want to be great, you have to surround yourself with really great athletes and if you’re the average of them that’s pretty high.”

Potter actually shared a house with Jonny Brownlee and has clearly benefitted from being around athletes of that stature as she earned crucial race experience, already scoring a European Cup in 2017 and World Cup silver a year later in Antwerp. In 2019 she became European Champion and made a first World Series start, and then 2020 ended on a personal high with silver and gold at the Arzachena and Valencia World Cups

“Maybe people were surprised that I managed to hold on (in Arzachena) because I was biking with some really good girls and then managed to outrun them. I think that’s where I used to struggle before, getting to the run in one piece and if I’d really burnt all the matches it was game over. So I think that’s something that’s just come with time.”