World triathletes in love and triathlon 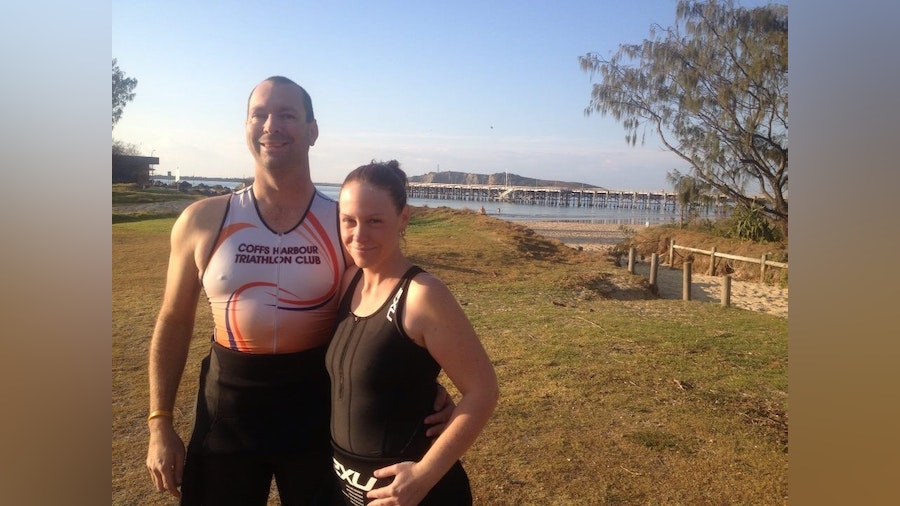 Team Varney, Australian husband and wife who do triathlon together

Meet Lee Varney, a fire fighter, and Bec Varney, a nurse, from Australia, who swim, bike and run together and celebrated their 20 year anniversary competing at the 2019 World Triathlon Age-Group Championships together.

Don’t look at times, look at faces in the crowd, both those cheering you on and those that are inspired by you. Times come and go, but those faces last a life time.


How did you get into the sport of triathlon?

Lee: I played hockey for the New South Wales, Australia. fire brigade team and always competed in the world firefighter games. One year they didn’t offer field hockey and only ice hockey so I needed a new sport, I owned a bike so I thought I would give triathlon a go. The Olympic distance nearly killed me, with no training I thought it was going to be easy, that was 2012.

Bec: I started 4 years ago after watching lee for years and being too nervous to give it a go, because I was on the larger side. After losing 20-kgs I started to run then took on the bike and then my worst fear was the swim I literally hadn’t been in the water for a very long time not even to take my kids swimming because I was too scared of being in a swim suit I finally got in and have never looked back.

Who are you racing in Lausanne with?

We are racing husband and wife it was our 20 year anniversary this year and wanted to do something special and Triathlon it was, we are going together no other known supporters but we are not shy and will meet people quickly.

Lee is a firefighter, and swimming teacher Bec is a nurse, therefore we don’t get to see each other very often due to shift work, so being able to train together has been awesome we have spent quality time training and chatting away.

Lee: my children. I have always told them when things get hard to push on and I have shown them this with sport, my swimming kids I want to show a positive role model too and that hard work pays off and that it doesn’t matter where you come as long as you “tri” hard and finally watching people in triathlon overcome things. I look at the older generation in the sport and hope to one day still be competing like them, it’s incredible.

Bec: watching people in triathlon overcome and get over some major trials to keep competing there is many an amazing story out there in the triathlon community. My husband inspires me I have watched overcome PTSD, using triathlon it’s been literally a life saver for him. I am also very inspired by watching some of the mums I have encouraged to take up Triathlon watching them push boundaries and go on to succeed.

What have been your greatest triathlon achievements?

Lee: Finishing IRONMAN Western Australia, after suffering a major breakdown and with a PB, having my kids who at that stage hadn’t seen me finish a IRONMAN being in the finish line to give me my medal, lots of tears and cuddles.

Bec: Wearing a tri suit, it took a long time to get into one… no seriously I can’t pinpoint a single race or event, it’s all been a big journey for me, but wearing green and gold is very very special this is my first overseas race and I am very excited to be part of it

Are you in a triathlon club in Australia? What is the culture and environment like?

We are both part of Coffs Harbour Triathlon Club, it’s a diverse club and very welcoming to anyone wanting to give the sport a go.

When did you decide that representing Australia at a World Championships was something you wanted to aspire to?

Lee: Last year I tried to get on the team in Gold Coast but missed out, I was so blessed to be able to be NTO at the event and loved every moment of it, the atmosphere and people…that pushed me to make I made the team this year.

Bec: It’s was our 20th wedding anniversary this year and we were planning on doing an Everest base camp trek but as lee was trying to make the team I jumped on a few qualifying races and thought what the heck, still can’t believe I got there.

How would you describe the triathlon landscape in Australia?

Evolving I love that TA are encouraging more everyday people and women into the sport it’s more then a competitive race it’s life changing for many and I hope to see more people encouraged to get into the “scary” sport, inclusion is such an important thing.

Have you raced at a World Championships before?

Lee: No, I was a Tech official at the Gold Coast and was determined to be on the other side of the fence this year.

What are your expectations for racing in Lausanne?

Lee: To finish and carry the Australian flag over the line also meet some long lasting friends

Bec: A very tough course, and also can’t wait to see everyone out there competing from many different countries, ages, abilities and walks of life all together enjoying it together I am very excited for the parade of nations

Who has been your greatest influence on your triathlon pathway?

Lee: My family have always been by my side, I have also met many great friends through Triathlon that continue to inspire me daily with their achievements too many people to individually name.

Bec: I would have to say lee first and foremost he has been there at all my races and has even supported me whilst having a huge tantrum in transition, and my kids they have watched me change over the years and have always cheered me on even when I come last.

Is there an elite triathlete you look up to for guidance and why?

Lee: I met Meredith Kessler at IRONMAN New Zealand wow what a lady, she has such an amazing outlook on her races and loves her family to bits I have kept in touch over the years and find her so down to earth I also get coached by American triathlete Leander Cave. Both have everything in balance, family, friends sport etc.

Bec: Not really it’s the everyday people that inspire me, the last ones over the line more then the first ones.

Lee: Triathlon helped me get over some dark times in my life, so why not keep with something giving me good health both mentally and physically.

Bec: In the beginning it was to push my boundaries and do things I hadn’t done since I was a child…now it’s the enjoyment the community of triathlon and the people there is now other sport out there that has professionals, 16-year old and 85-year old all on the same course.

What’s the best piece of advice in triathlon you’ve been given?

Lee: Don’t look at times, look at faces in the crowd, both those cheering you on and those that are inspired by you. Times come and go, but those faces last a life time.

Bec: Don’t worry about times etc get out there give it a go, and always finish with a smile.