Visualisation to Planking in Pyjamas: How Katie Zaferes is keeping her head out of water

The 2019 ITU World Champion Katie Zaferes’ meticulous pre-race preparations were a major part of the American’s title-winning campaign last year. So how has she been surviving during the unpredictability that hit everyday life around the world as a result of the current pandemic?

Back home at her parents’ in Maryland, USA, she reveals that, like for a lot of people, recently the range of emotions has been wide. Staying connected virtually has obviously been a big part of the highs, the lack of racing, total upheaval of training patterns and extended time out of the pool just some of the lows. Equally, she remains extremely thankful for being able to stay somewhere she feels comfortable and supported. And able to plank in her pyjamas.

“It seems like everyone has gone through different phases of acceptance and denial and fluctuations on a daily basis with motivation, training and everything. I know everybody is approaching this differently and some are happy with the break and others are finding it really hard or don’t know if they can continue for another year and hadn’t planned for that. I’d say I feel comforted by the fact I find myself somewhere in the middle.”

Now in mid-April and more settled into her new reality, that comfort is a long way from the difficult decisions that were coming thick and fast in early March as 2020 season-opener WTS Abu Dhabi was postponed. Katie had then re-grouped in Florida with the training team but, within a matter of days, everyone was moved on again.

“It was so stressful as everybody was suddenly having to go back to Europe. They were forced to make quick decisions that would normally be planned for months in advance and had become day-to-day challenges and issues. Tommy and I felt for them because at least we were in our home country. Our problems were minimal compared to everyone else.”

After the team had disbanded, the immediate issue of resuming training made heading to the home in which she grew up the obvious choice. Katie bought a treadmill but, with exercise still permitted outside, it has thankfully stayed in the box. One comment on a photo of her out riding while still in Florida – at a time when there were no restrictions in place in the US – did, however, leave its mark on someone who instinctively would never want to cause upset to anyone. She now prefers to bike indoors, and has come to appreciate a new-found appeal of virtual training.

“Joel (Filiol, Katie’s coach) checks in a lot. I told him my goal is just to try and ride more than he does on Zwift but I don’t think he thought that was enough! It’s no replacement for being with the team in person but there is a positive feeling and excitement to see them out there virtually.”  Swimming is a different matter. Not used to being out of the pool for so long, the strength workouts have increased from two to six-times a week, 30 minutes per session. To not lose that edge, Katie has also been working with her sports psychologist on visualisation techniques that help her try to recreate those intense moments during the swim that every triathlete knows all too well.

“It’s all about feeling the water, the effort, the breathing patterns. I sent her one of the harder workouts we do with Joel and she sent me this visualisation, using all the senses to go through the swim. It has been part of my programme for a few years and I figure if I can’t swim, I should do the next best thing.”

As for the rescheduled Tokyo 2020, Katie had already set aside 2021 as year of ‘wiggle room’, happy to take the year as is it came after the efforts to chase her Olympic dream and going all out for the defence of her world title. That leaves her comfortable with the prospect of another year of build up as she awaits news of the revised calendar and new qualification criteria.

“USAT has been great at staying in contact and keeping us as in-the-loop as they can, but nobody really knows what’s going on or what the future looks like. They announced pretty early on that Yokohama would no longer be our qualification race. In some ways you want more information, but then you know it is an impossible situation for them or ITU and I have appreciated them reaching out. It is good to now know for sure that races are cancelled through June and we can look beyond then. For Tokyo, it will be so positive to be coming out of all the challenges for so many different people and have a time when all the countries can unite.” 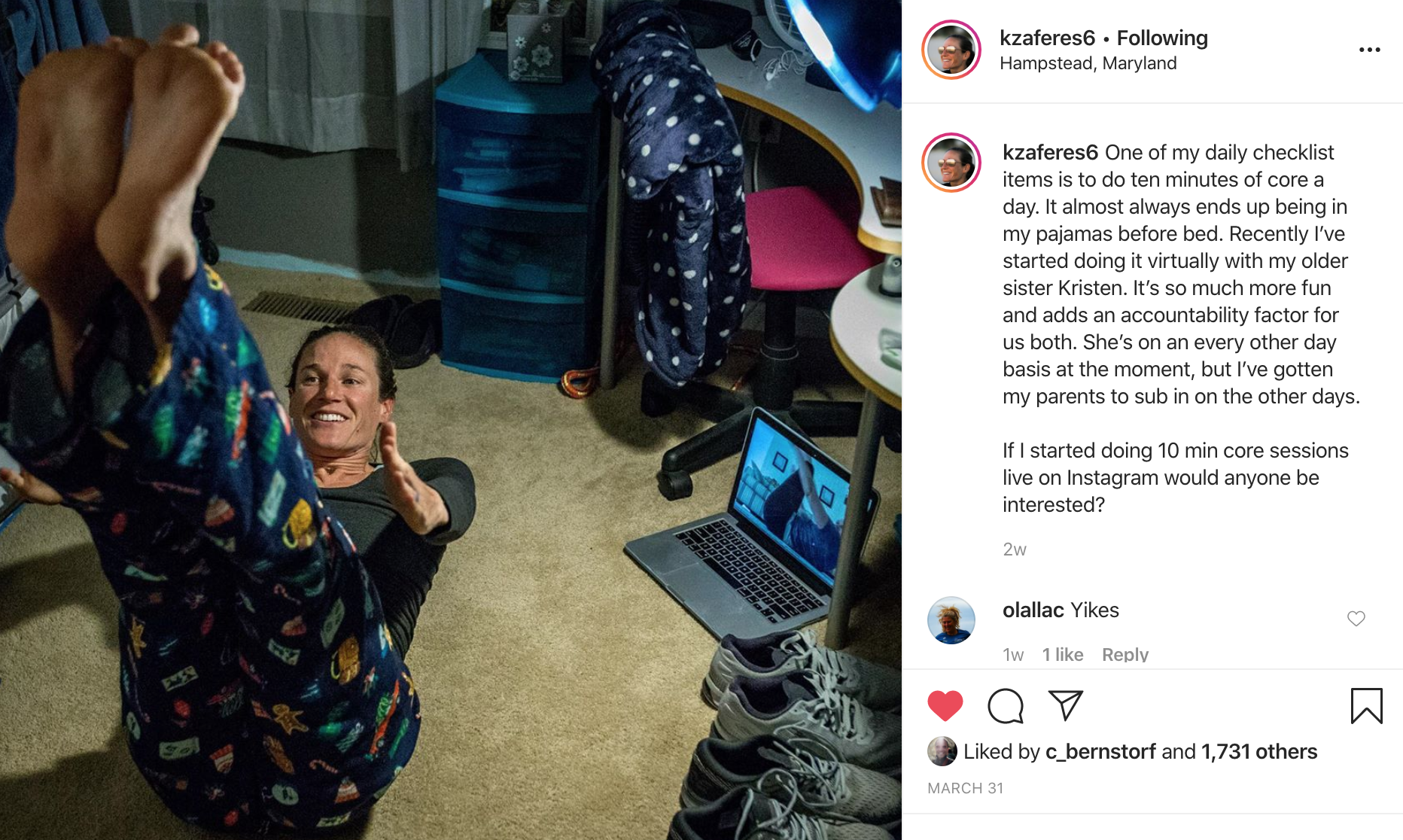 And what about the bedtime planking? Well, it’s all part of staying connected. The new night time ritual began as a one-to-one with her sister, who she is talking to more than usual under the lockdown, and then became another way of sharing and connecting with the world.

“So I started doing this thing called ‘planks in pyjamas’ and at 8pm every night I do 10 minutes of core on Instagram Live. My sister and I always spend a lot of time apart but through this situation we’re reaching out to each other more and these little things help. I even made bagels and was pretty excited about that. I’ve done a bit of everything. I think you can look at this time and think everything has changed, but then a lot just feels like it has. I want to read more and keep off the phone and have more quality time with people. That all seems more at the forefront now for me.”