Olympian Jodie Swallow and reigning European Champion Javier Gomez won the first round of the ETU Premium European Cup Series in Pontevedra today. The sun was out in Northwest city surprising everyone who attended the event in the previous two years, where the competition was heavily effected by rain and cold weather. This time however, athletes and spectators witnessed perfect conditions for triathlon racing with 20 degree air temperature and lots of sunshine.

Jodie Swallow from Great Britain, Rebecca Robisch from Germany and Radka Vodickova from the Czech Republic were going in as the biggest favourites into the women’s race. Over 30 athletes dove into the river of Pontevedra, Rio Lerez where Vodickova proved her great swimming form as she managed to get to the front straight away and lead the group along the two laps of swimming. Another five athletes, including Anja Knapp & Carina Brechters, Abbie Thorrington & Jodie Swallow plus local favourite Aida Valino joined the Czech on her breakaway from the main group on the hilly bike course, with some great runners including the likes of Robisch and Anne Haug chasing behind in the peloton. The leaders managed to extend their lead to almost two minutes towards the end of the bike. Swallow was the quickest out of transition, followed by Knapp and Vodickova. The Brit showed a great performance as she managed to extend her lead on every lap, managing to take home her first victory of the 2010 season. Vodickova finished in second, Knapp won bronze. The best run split of the day was clocked by German youngster Robisch who finished in 3rd place.

The elite men’s field made their start immediately after the women, and the streets of Pontevedra became packed as all the locals wanted to see their hero Javier Gomez taking home the victory. The local boy put down the hammer straight from the beginning, finishing the swim 45 seconds ahead of the chase group. It was only then that the 2008 World Champion made the decision not to wait, and try to go solo. His Spanish teammates in the peloton did their part of the work by slowing down the group, and Gomez extended his lead to over two minutes at the end of the bike. A huge crowd lined the streets to see the run leading through the historic city centre of Pontevedra and welcomed Javier and all other athletes to a fanfare of noise and applause. The local favourite made no mistakes and cruised home for victory, 2009 Junior World Champion Mario Mola outran Thomas Springer of Germany for the silver medal with the German settling for third.

The day ended with the medal ceremonies for the elite races. Pontevedra proved yet again to be a great host to world class events, and the city will look forward to the return here next year of the ETU Triathlon European Championships in 2011. ¡Hasta luego! 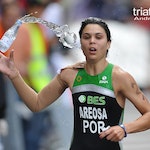 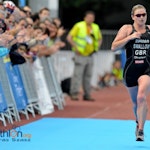 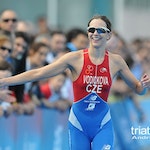 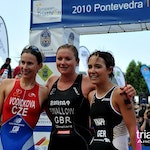 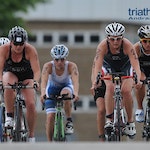 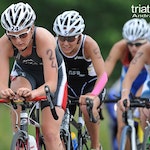 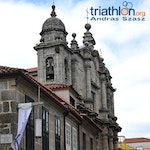 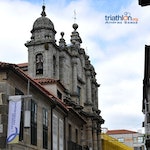 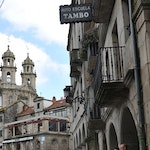 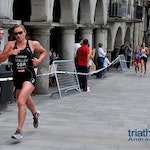 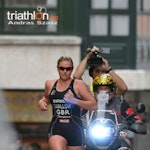 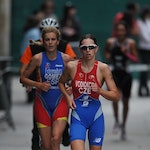