Susana Rodriguez: from the cover of Time to the top of the Tokyo 2020 podium 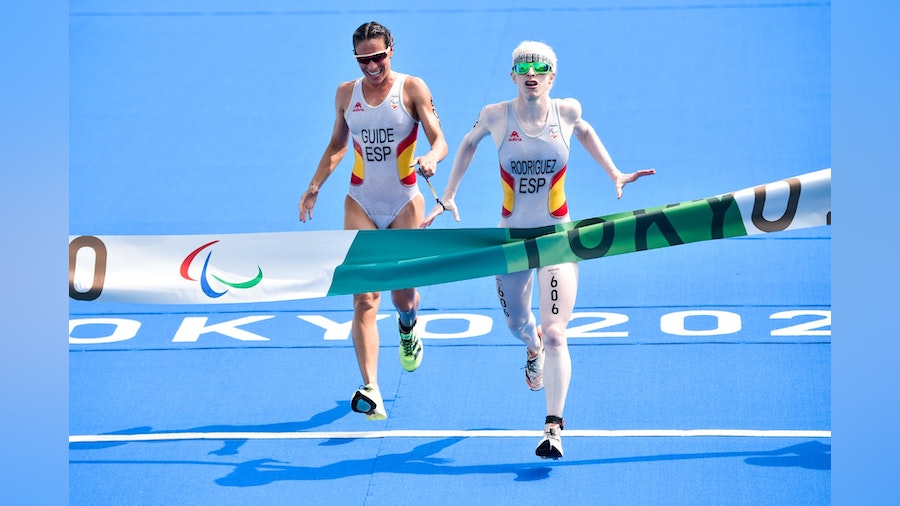 In 2016, Spanish young doctor and blind para triathlete Susana Rodriguez crossed the finish line in 5th place, and promised herself that she will do better in Tokyo. And today she delivered. Only a month after making it to the front cover of Time magazine for her dual work as a professional athlete preparing to compete in two events -para triathlon and para athletics- in Tokyo and fighting the pandemic at the hospital where she works, Rodriguez and her guide Sara Loehr just became the Tokyo 2020 PTVI Paralympic champion. Italian Anna Barbaro (and guide Charlotte Bonin) finished second and Annouk Curzillat and guide Celine Busrez (France) in third place.

Five years after we saw one of the most dramatic finishes ever in the PTVI women’s race in Rio 2016 -and with Katie Kelly claiming then the gold medal-, 12 blind athletes toed the start line in Tokyo, one of the more competitive fields ever but also one f the most uncertain one, considering the impact that Covid has had on many athletes and on their preparations for the Paralympic Games. Many of them have not competed at the highest level since February 2020, or have had difficulties to properly train, so there could be surprises especially considering the heat conditions and the non-wetsuit swim provisions for the races this weekend.

And Spaniard Susana Rodriguez decided from the first minute that she didn’t want any surprises. She has shown extraordinary performances since 2019 when she won the Yokohama WPS event, and it has been all wins for her since then, except for a DNF in Funchal 2019. But with a new guide in Tokyo, she didn’t want to leave any chances to he rivals.

Rodriguez led the swim from the beginning, with only Canada’s Jessica Tuomela behind her. Toumela has had a tremendous progress in the last couple of years and managed to keep up with the pace of Rodriguez in the swim and also on the bike, always less than a minute behind her. But a slow second transition gave all hopes to the athletes behind, Anna Barbaro, Annouk Curzillat and Allison Peasgood (GBR) to start the chase.

While Rodriguez ride and then run completely solo to claim the victory stopping the clock on 1h07’15’‘, behind her Barbaro proved again to be a top athlete at key races and claimed silver, the best result of her career so far. An incredible last kilometer gave Curzillat the bronze medal despite the efforts of Peasgood and her guide Nikki Barlett, who sprinted all along the blue carpet to finish in the disappointing fourth place.

“In the world of sports, this means everything. We can do really good races, we can win world championships and each race has its own history. But there is nothing as big as the Paralympics. Since I was a kid and I realised I had a disability I wanted to go to the Paralympics,” said Rodriguez.

“I went to the Paralympics in Rio and finished fifth and promised myself I wanted a new opportunity. For that opportunity I needed to work very hard to get better in the three events of triathlon. This is what I have been doing in the lead-up to these Games and I think I have done my homework.Today we executed the plan to perfection,” she closed with.

It was an emotional finish for French para triathlete Annouk Curzillat to earn a hard-fought bronze Paralympic medal.

“It’s an accomplishment that is the result of several years of effort. At the beginning I didn’t even believe I would be able to take a medal. To have done it is something amazing.”