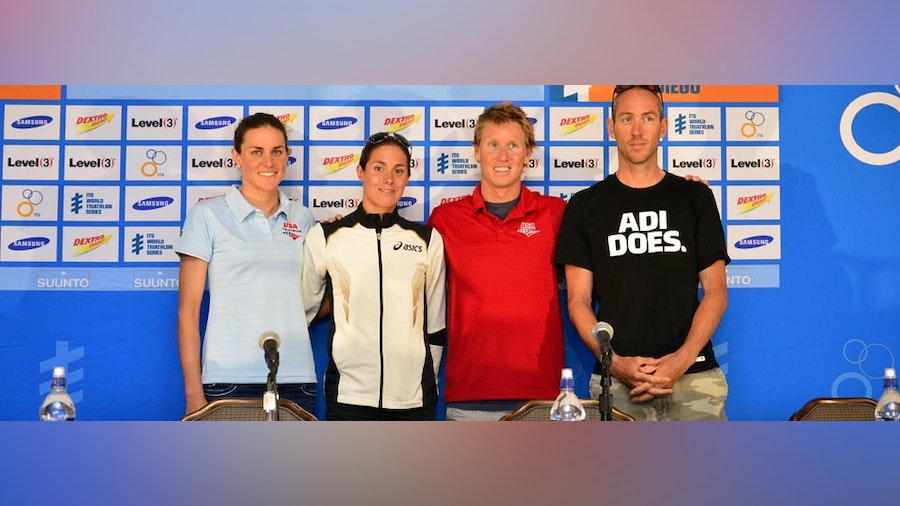 On the eve of the women’s race at the ITU World Triathlon San Diego, four of the sport’s biggest names met with the media at the event’s official pre-race press conference.  Reigning World Champion Helen Jenkins and double Olympic medallist Bevan Docherty were joined by two of America’s brightest stars, Gwen Jorgensen and Jarrod Shoemaker.  After opening addresses from ITU President Marisol Casado and USA Triathlon CEO Rob Urbach, the athletes talked about their goals for this weekend, their paths to San Diego and of course, the Olympic Games.

Helen Jenkins (GBR)
“It’s really exciting just to know the Olympics are going to be in your own country. At the same time I’m trying not to get too excited this far out from the Games.”

“I’m just trying to keep everything simple and it’s more about getting the training in and doing the work because this year is the important year. I’m trying to keep that in perspective and that’s my goal - try to get to London in the best possible shape.”

Gwen Jorgensen (USA)
“Honestly, I’m so new to the sport that I don’t really have a favourite type of course. I know it’s beautiful, and it will be great for spectators. I think there will be lots of spectators out there. I think it will be exciting, good for the experience of the race; I’m excited about it.”

Bevan Docherty (NZL)
“The key word there is maturity. I’m getting older now and I can only peak so many times a year. In an Olympic campaign, there is only one race that counts. It’s still a journey to get to the Olympics but if you play your cards right and are smart about it, you put yourself in the best possible position come August.”

Jarrod Shoemaker (USA)
“The goal for all of us is to race as hard as we can because you never know what happens in one of these races. It’s about putting yourself in a position to succeed. My goal is to go out and have fun, enjoy and race as fast as I can.

Catch Jenkins, Jorgensen and the rest of the elite women at 14:00 PST on Friday 11 May live at triathlonlive.tv.  While Docherty, Shoemaker the elite men begins at 14:30 PST on Saturday 12 May.