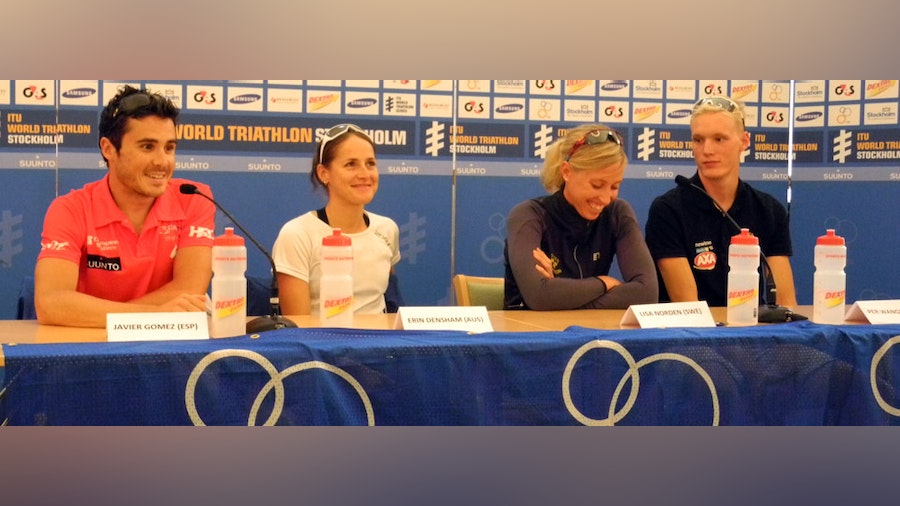 Javier Gomez (ESP)
On the hill finish:
“It’s true you know, we don’t have many uphill finish lines and I don’t remember any that are as steep like this one or have a transition area on a hill…so it’s something different and as it’s different you don’t know what to expect. It could be a benefit to some guys, maybe not to others. But we have to be ready for anything, it’s a really interesting course.”

On the sprint distance:
“The thing is, any small mistake, it will cost you lots of positions. The top 10 or 15 in the race will be decided in a few seconds so if you have a bad day, then you can finish really badly. So you have to be really focused the whole time, you can’t make any mistakes, the transitions have to be perfectly done.”

On triathlon’s progression from Beijing to London:
“I knew I would have to be faster, and if I think for Rio 2016 I would probably have to run 28.45 if I want to be in the mix. It sounds crazy now, but it also sounds crazy saying 29.30 four years ago and the Brownlees came into the sport and they did it. So you are constantly looking at ways to improve and look at ways you can be a better triathlete.”

Lisa Norden (SWE)
On her progression from part of the ITU development team to Olympic medallist:
“I think that was one of the major breaks for me in the sport. I remember sitting in Swansea in England I had gone over to train with Chris Jones, I had a phone call with Tomas saying maybe it’s time to call quits, I’m not sure if I can sustain this for another year. That was at the end of 2006, I lived in a basement, it was cold, there was a place where we could keep the milk outside the fridge and it still wouldn’t go off. It was just one of those miserable places. And I was like, I’m over this I want to go home, go to Uni, get a job and make some money.

“I had a phone call from the ITU saying that I made it into the scholarship programme which granted me a 10,000 dollars scholarship, at the same time I also had the opportunity to be part of the Swedish Olympic Committee so they together with the federation they gave me a budget for races. The two of them together, made it possible for me to keep going and keep travelling. Also the experiences of being part of the BG team, as it was called back then, the ITU development team, you go to a race and you don’t go by yourself. You see countries like Australia and Spain turning up with big teams, and coaches and massage therapists, and being apart of the development team gave me all that; it gave me teammates, it gave me coaches, it gave me that bit of security at racing. That was a massive support.”

On the potential of Mixed Relay to be included on the Olympic programme:
“Of course it would be fantastic to get more medal opportunities, someone figured out that if I was going to get as many medals as (Michael) Phelps I would be in my mid-90s and I don’t really think that’s going to work. For the sport to grow, I think that’s a natural way to go. It’s a super exciting event to watch, and it’s something for TV and the crowd and places like this, to bring it downtown, and for us as athletes, to make more stars of the future, you need more medals. It’s a great opportunity.”

Erin Densham (AUS)
On whether her preparation changed for the sprint distance:
“I think the sprint distance is a hell of a lot more fun, it’s over in half the time, it’s great.  We went over the course today, I’ve heard a lot of people think it’s dangerous. I don’t see that, yes, it’s technical, there are cobblestones, it’s going to be exciting, you have to be able to handle your bike as well in this sport. It’s not just about boring courses and being strong, so I’m looking forward to the course.

On Stockholm’s first appearance in the ITU World Triathlon Series:
“It’s also awesome that it’s in Stockholm, I’ve never been here, so I was excited to come, did a bit of research before I came and thought ‘this place looks cool,’ and it is. It’s really cool. And then obviously another element with the team’s race. It’s different, it’s even faster, it’s even more exciting, I really hope that the team’s race and the sprint distance makes a big impact in ITU in the coming years.”

Per Wangel (SWE)
On watching the women’s Olympic competition:
“First of all, I didn’t actually see the race, I was out training on my own. But I saw it on Twitter and on Facebook that a lot of people were wondering if she was winning or second, so shut my phone off and went to a stream and watched the race again. I’ve got to say it was really (great) to watch Lisa on the podium. The first couple of minutes, the people were not upset but they were ‘we’ve lost the gold medal,’ but I saw it like we came second, we have silver, so it was good for the country and good for the sport in the country. Now the sport is getting bigger in Sweden and a lot of people notice triathlon is a big sport in the world.”

The weekend of racing in Stockholm gets underway on Saturday with the men’s ITU World Triathlon Stockholm at 2:50pm local time on Saturday 25 August. The women’s ITU World Triathlon Series race will get underway almost two hours later at 4:45pm. The 2012 ITU Mixed Relay World Championships will be held on Sunday 26 August at 2:45pm. Follow all the events live through our live stream at triathlonlive.tv. You can also follow along on Twitter at @triathlonlive.