Following a successful two-woman bike breakaway with Korea’s Yun-Jung Jang, Samuels held off the hard-charging Maria Czesnik (POL) and Yuka Sato (JPN) to take gold in a time of 2 hours, 1 minute and 51 seconds.

A relatively small field of about 30 women kicked off the day with a two-lap non-wetsuit swim in Tongyeong Bay.  Samuels did not waste any time asserting herself as the one to beat as she led the women out of the water.  Behind her were by a host of up and coming talent which included home favourites Jang and Dong Hwa Chae, Sato, and Aussies Charlotte McShane, Natalie Van Coevorden and Tamsyn Moana-Veale.

Out onto the 5-lap 40km bike course, Samuels and Jang broke from the field and surged to the lead.  After the first lap, they built a 35-second lead, which grew to 50 seconds by the second lap.

But the pack failed to close the gap and by the time they took the bell lap Samuels and Jang owned a lead of one minute, ten seconds.

Despite stepping onto the 4-lap, 10km run course at the same time, Samuels accelerated away from Jang almost immediately.

The chase group only lost more time on the final lap as Sato, Czesnik, Bailie and Kingsford faced a deficit of a minute, 45 seconds at the start of the run.

Jang’s position near the front was short-lived and she was quickly reeled in by stronger runners like McShane and Sato.  The pair ran shoulder-to-shoulder as they attempted to close the gap to Samuels.

But they would soon find opposition from Czesnik who was storming through the field and passed McShane and Sato in the final lap.

As she approached the finish chute and stepped on the blue carpet, Samuels looked behind and knew victory was hers, triumphantly raising the finish tape for her second career World Cup victory.

“I wanted to have a strong swim, be strong to that first buoy, so once I got there I just set my race up from there really,” said Samuels after the race.  “The race plan never really goes to plan, but I wanted to go on the bike and bring one other with me and it happened from the start, so it was playing out perfectly and a good enough time on the run, I knew I could hang in there.”

Czesnik gained a lot of ground in the final lap to finish strong for silver, her second straight World Cup podium this month after taking silver in Guatape two weeks ago.

“I lost the first group on the swimming, so I had to chase them on the bike,” said Czesnik, who finished nine seconds behind Samuels.  “Then on the run I thought that the gap between the first group was too big so I didn’t even think about chasing them, but I was trying to get on the podium. Just on the last lap I saw that Nicky was very close and I started to chase her but it was just too late.”

Japan’s rising star Sato crossed the line three seconds behind Czesnik to claim bronze and earn her first trip to a World Cup podium.  Sato was a standout junior, having won gold at the first Youth Olympic Games in 2010, and successfully transitioned to the elite level this year after silver at the Asian Championships and now bronze in Tongyeong.

McShane just missed out on her first World Cup podium, finishing in fourth, duplicating her result from Tiszaujvaros a few months ago.  Van Coevorden rounded out the top five

Best for the home country Korea was Jang in tenth place, despite being near the front for the entire swim and bike. 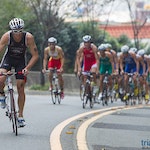 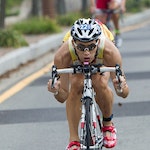 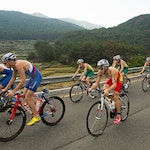 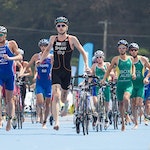 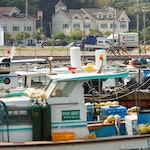 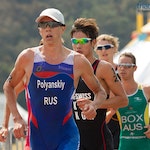 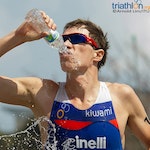 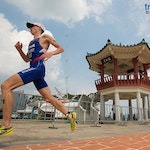 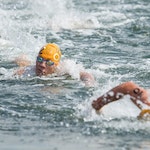