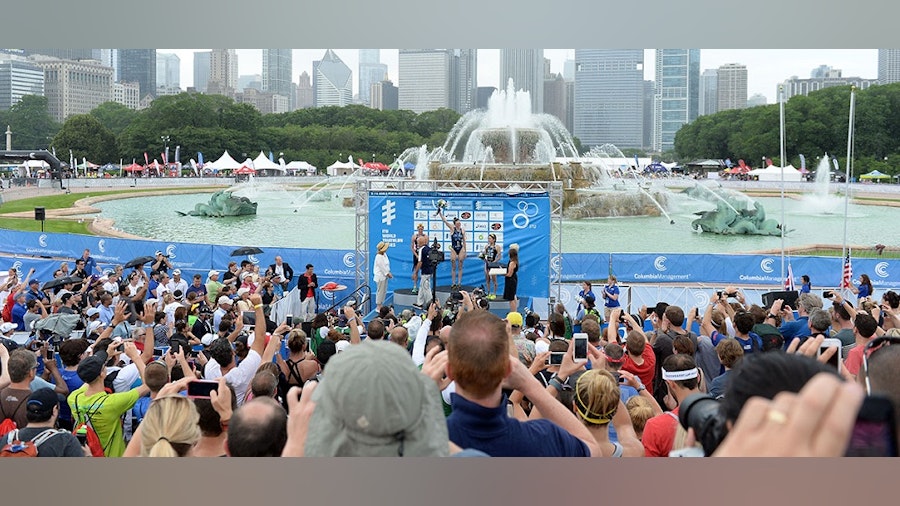 The women’s ITU World Championship title will be decided in a heated battle on Friday at the ITU World Triathlon Grand Final Chicago with only 300 points separating the first two women - both Americans. Gwen Jorgensen (USA) returns to retain her reign as the world’s fastest female triathlete, and will do so in front of practically a home crowd as she hails from nearby Milwaukee, Wisconsin. While she’s the heavy favourite, having gone undefeated in the last 11 WTS races, it’s her own compatriots that could stand in her way, as Katie Zaferes (USA) is her strongest competition at second in the Columbia Threadneedle Rankings with Sarah True (USA) third.

Swim
It’ll take a strong swimmer to make it out in a solid position on the two-lap swim in Lake Michigan. The lake features choppy water with waves that can break harder if Chicago lives up to its gusty nickname. It’s the rare race that Carolina Routier (ESP) and Claudia Rivas (MEX) don’t lead in the water. Sarah True (USA) has joined taken her turn at the front of the swim various times this season, as has compatriot Katie Zaferes (USA) – both of whom are in contention for a World Championship title. A lead out of the swim will be vital for any hopes of holding off Jorgensen.

Expect Emma Moffatt (AUS), Pamela Oliveira (BRA), Helen Jenkins (GBR), Andrea Hewitt (NZL), and Vicky Holland (GBR) to also be in solid position out of the water. While the swim isn’t quite a strength for returning World Champ Jorgensen, as her run ticks that box, it certainly is no longer a weakness. She has consistently made the front pack this season, meaning we’ve seen far less of those minute-down come from behind runs. If she’s with the fastest swimmers out of the water, not much can stand in the way of this lady taking a consecutive championship title.

Bike
Though flat, the bike is chalked full of 90 degree turns that will burn the legs over the nine-lap 40km course. Moving from top speed to a slow turn and gearing back up to full power requires the best of the best. This year that title clearly belongs to Flora Duffy (BER). Combine her skills on two wheels with her finesse in the water, and she could just be the key in the lead break group staying away. Hewitt, who finished third in the rankings last year, is a top cyclist that will join Duffy in hammering out a high speed on the bike. The Kiwi is just 191 points from returning to the top 3 yet again, so there’s no holding back for this lady.

Jenkins, True, Holland, and Jorgensen will not likely be dropped from a lead peloton. Anne Haug (GER) endured an injury that’s kept her off the podium this year, but her biking still speaks for itself. While not a strong swimmer, she’s just as dangerous to the lead group if she’s charging at them from the chase. Likewise, Non Stanford (GBR) has seen a mixed bag of results on the swim this year. If she makes the lead pack, she’ll do her part to keep the chase away, but be sure she’ll be pushing the watts if she’s behind.

Run
There are no questions here, Jorgensen is the undeniable target to rope in on the run. Jorgensen came from more than a minute deficit last year to win Chicago, just as she did in Edmonton to win her first world title in 2014. This year she’s been dropping the leaders on the run instead of chasing them down as one of the athletes out front the whole race.

But Stanford and Holland forcefully announced their return from injuries this year with equally stellar performances, hanging with Jorgensen on the run for much of the Rio Test Event and World Triathlon Hamburg. Add on that these two ladies each need a podium performance to clench their spots to Rio and they’ve got a hunger like no other.

Likewise, Zaferes, trailing just 300 points behind Jorgensen, has just as much a shot at the World Championship crown as her compatriot. She’s yet to win a World Triathlon Series race, but she’s put together a string of performances that suggest she can.

The women’s elite World Championship will be held on Friday, September 18 at 5pm following the elite paratriathlon, women’s U23 and junior world championship races. To watch the races live, tune in at triathlonlive.tv. For play by play updates, follow us on twitter at @triathlonlive.