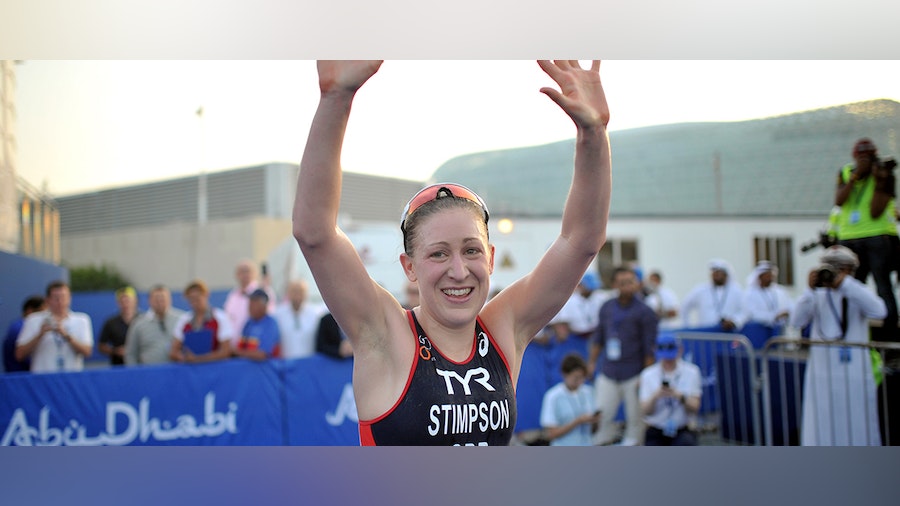 The 2017 World Triathlon Series is well underway, with two competitions down in the nine-stop tour across the globe. While this new season has shined a light on many athletes choosing different competition paths or personal events post the Rio Olympic buzz, one woman from Great Britain has instead been show-stopping the female field to stake claims on a WTS World Title.

Last year did not go as planned for Jodie Stimpson. After a disappointing 2016 left her unable to fulfill her Olympic dream for Rio, she missed the final spot on the women’s team. But despite the letdown, Stimpson walked away from the year with a strong top-seven finish in the overall Series rankings and ended up with two podiums including one WTS win. So, while the year was a personally difficult one for the Brit, the things that she learned and grew from the experience enabled her to want to start this year fresh, as one of the top elite women.

On what Stimpson took away from her past year she said, “Firstly thank you. You are right it was definitely full of ups and downs, for sure one of the hardest of my career to date. I suppose the main thing I took from the year is how much I love the sport and love what I do.”

Entering the new season, 2017 was shaping up to be revealed as a whole different type of competition, as many top contenders, such as Gwen Jorgensen (USA), Helen Jenkins (GBR) and Nicola Spirig (SUI) announced that they would not be competing because they were pregnant. Therefore opening up the field for possible newcomers or old rivals to come in and take over the leaderboard.

So if there was ever a time to claim a season, 2017 was going to be it. And luckily for Stimpson, that meant starting out in the same city where she claimed gold. Gearing up for the Series opener in Abu Dhabi, Stimpson spent her offseason training getting back to the beginning, a place where she competed in triathlon because she loved it, since she was a little girl and competing with her Auntie Derek (a nickname she called her Uncle.) 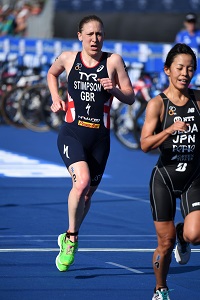 “You never really know how your winter has gone until you have a few races under your belt. I don’t think anyone feels ready to race in the first race of the year especially when it’s in March. But I love to race – it’s what I train for so I was excited to get out there and see where I was at in my training - what had gone well on what I needed to work on.”

As the 2017 World Triathlon Series kicked off in the Middle East, the whole world watched to how Stimpson was going to perform, eager to see her take the same stage that earned her the opening gold medal the year before in 2016.

Stimpson did not disappoint.

She ended up in the middle of the field in the swim, which caused her to just miss getting into the lead bike pack after the first transition. However, Stimpson clearly showed that she had been working on her cycle during her winter training as it only took her a couple of laps to draw her group to be mixed among the leaders. Not stopping there, she then pushed ahead to become the driving force of the leading women and cycled through with a strong and fierce bike performance, setting herself up for an even stronger run.

“I had great fun on the bike and as I was coming back from injury it gave me the chance to get a bit more of a bike block in my training. But in my new programme I am cycling more generally and also cycling to power - which I haven’t used before and I think this had made a massive difference. I went into the race with the plan of being an aggressive racer and getting back to how I want to race which I guess came out and I just loved to race hard from the go.”

It was Stimpson’s force on the bike that propelled her to be one of the top runners that day and peel off those behind her one by one. However, despite it looking like Stimpson was going to take the gold, New Zealand’s Andrea Hewitt put forth a steaming sprint finish on the blue carpet and bypassed Stimpson. So while Stimpson was unable to reclaim her Abu Dhabi title, she ended up with a silver medal and climbed proudly back onto the WTS podium for the first time since Cape Town last year.

“It’s amazing to step on to the podium and it’s what every athlete on the start line is aiming for - that top spot on the podium at the end of the race. That feeling is what every athlete is addicted to. It was great to start the year on a high but it’s very early days with a lot of work to do, she said. “How can you not have respect for someone like Andrea, she is such a tough cookie on and off the race circuit! There are a lot of girls in triathlon that I am lucky to call friends and the support they have given me not only last year but throughout my career is incredible.”

As the WTS continued in the Gold Coast, Australia, once again the eyes of the world were on Stimpson, as the reigning 2014 Commonwealth Games Champion, she would be getting the chance to compete at the same venue that will host the 2018 Gold Coast Commonwealth Games, where she will attempt at reclaiming her crown. Women’s triathlon will award the first gold medal of the Games next year and Stimpson will want it around her neck.

However, after the first sprint race of the year, the result was not what the Brit had hoped for, taking 16th overall after the day. But because of her second-place finish in Abu Dhabi, Stimpson today still stands at fourth overall in the Series rankings, leaving the path to the World Title still very much in the realms of possibility.

“It’s still very early days and I have a lot of hard work ahead of me. But I am excited and looking forward to seeing what continues to happen as the year goes on. I am still looking at the overall WTS series as I think it has so many different flavours of courses that will test me on all different levels.”

With seven races still to go this season, Stimpson is reaching for the World Championship, aiming at a feat she has not yet fulfilled in her career. But for anyone who has ever watched the Brit on the triathlon course knows, it is only a matter of time before she gets on that overall Series podium. And could 2017 be the year to do it? Only time and race finishes will tell. But one thing is for sure, Stimpson is a new racer this year and the triathlon world can be nothing but excited to see what she does for the rest of the Series. So what can we expect in her next competition?

“Hopefully enjoying being a different type of racer.”

Enjoyment - the key word for Stimpson this season. Enjoying the sport she loves and enjoying the competitions no matter the outcomes. So as the Brit continues her attempt at her first World Title, the world will join in on her enjoyment of watching her race, hoping nothing but the best on her road to redemption.