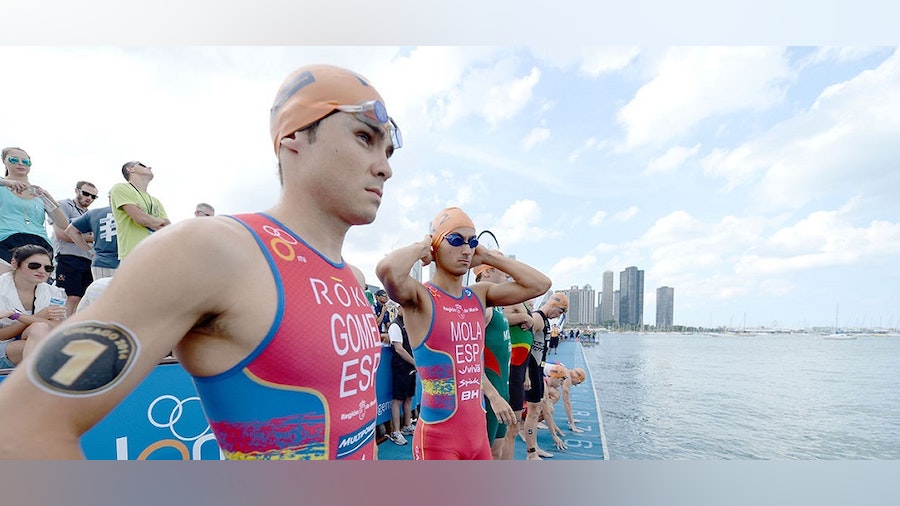 The race for the men’s elite World Championship title is one of the closest to be contested since the start of the ITU World Triathlon Series, with only 530 points separating the top four men in the Columbia Threadneedle Rankings. The final race of the four-day Grand Final, Spaniards Javier Gomez Noya and Mario Mola will line up as the men to beat, followed by France’s Vincent Luis and South Africa’s Richard Murray on Saturday in Chicago.

Drive for five
This week in Chicago, Gomez could become the first athlete to win five Olympic distance World Championship titles. Last year he entered rare territory by joining just Simon Lessing with four crowns after he cruised to a cool third place at the Edmonton Grand Final, which was good enough to win the overall title. Now only 51.5 km stands in his way until he enters territory as the single most successful World Championship athlete. He can swim. He can bike. And he can run. Having made the podium in seven of the eight WTS events he’s contested this year, it doesn’t appear that much can stand in his way, save a major malfunction to make the drive for five come alive. That said, with three other men right on his heels, this could be one of the toughest titles to take home.

New flesh
With the Brownlee brothers both having endured injuries this season, their inability to race during the Series has opened the hatch for new talent to bubble up. Vincent Luis is one of the athletes that rose to the task, as is Fernando Alarza (ESP). Luis, like Gomez, can swim, bike, and run with the best of them, including a show stopping speed on the run which has seen him score a medal in four of the five WTS races he’s lined up for. Alaraza has only been on the podium once this year, but he’s performed consistently enough to mix it up the Columbia Threadneedle Rankings and effect the podium with his racing style whether he’s scoring a medal or not. Aaron Royle (AUS) and Joao Pereira (POR) have also enjoyed a late season surge, suggesting they’ll be on point and ready for another podium in Chicago.

The Mola / Murray factor
Mario Mola and Richard Murray have been flirting with the top of the rankings for a number of years now, with Mola finishing second in the Series last year and Murray ranked fourth heading into Chicago. While both of the men have struggled in the swim, Murray missing the lead pack in Chicago last year, the South African is an expert bike handler and will excel on this technical course. If anyone is poised to drag up a chase on the bike, it’s Murray. And when these men hit the final discipline, all bets are off. They’ve both recorded incredible come-from-behind performances on the run this year as two of the fastest runners on the circuit. Whoever wants to be on the podium will have to be seriously far in front of this duo.

The return of Brownlee
Jonathan Brownlee (GBR) started the season with a bang, etching out wins in both Auckland and Gold Coast, but an injury meant the Olympic bronze medallist was forced to miss the back half of the season, including the Rio Test Event. While he’s not in contention for the World Championship title, he will likely play a part in who goes home crowned as the world’s fastest triathlete. A well-rounded triathlete capable of making an impact in all three disciplines, little is known on the former World Champ’s form. But one thing is certain. He rarely races unless he’s ready to fire on all cylinders. Add in that only Gomez and Jonny’s brother Alistair Brownlee have ever won a Grand Final and Jonny may just gun to add his name to that list.

Getting in front
There’s a host of men that will set the tone of the men’s elite World Championship race including Royle, Gomez, Brownlee, and Luis in addition to Russian brothers Dmitry and Igor Polyanskiy, France’s Dorian Coninx, Pierre Le Corre, and Anthony Pujades, USA’s Ben Kanute and Gregory Billington and South Africa’s Henri Schoeman. This group will push the pace on the swim and several of them know how to push out the watts early on to keep the chase away. Anyone trying to make the front pack on the bike needs to keep this crew in sight.