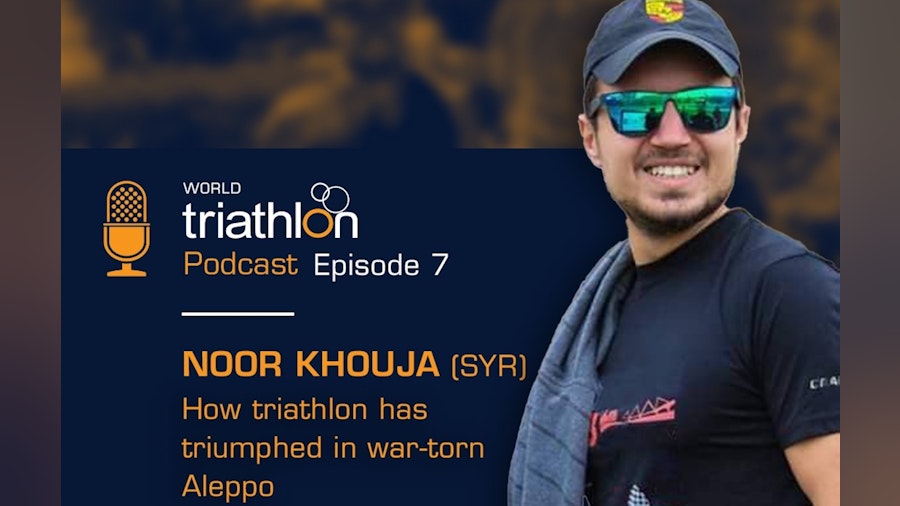 On the next episode of the World Triathlon podcast, we speak to the inspirational Noor Khouja, one of the key figures at the heart of the triathlon community in Aleppo, Syria’s war-torn second city. For the past decade, the sport has managed to grow despite the numerous obstacles and tragedies in its way. Khouja and the rest of the volunteers coaches’ irrepressible spirit and passion is the reason why.

It was in the aftermath of the tragic death of his younger sister when his family home was hit by a bomb in 2015 that Noor made a positive decision out of the sorrow.

“Triathlon was what kept me going. Every stroke in the pool or pedal on the bike eases my pain. I started to coach an independent female team, starting with two athletes and now we are eight, all aged between 14-20. With the religion and ideology here in the Middle East this is important. When a young lady now sees there is a special team for them, they can feel more confidence to take part. So now every time I improve a young lady’s lifestyle, I feel i have found my peace and done something I couldn’t do for my own sister.”

Like the city itself, Aleppo’s triathlon community has continued to fight adversity. In 2016, just as a local race was due to start, machine gun fire meant a panicked halt to the event. The following year, the team regrouped and Aleppo staged its first National Championships since the war began.

This time, the competition was a big success. With the confidence of that event, the team took it upon themselves to create an open water section for the swim in the shallow River Qwayq for 2018. “The Aleppo staff worked as usual, cleaning the river course, plugging one end with tree trunks and plastic curtains and the water level rose and became swimmable.”

Local hero Mohamad Maso is now hoping to achieve a tripartite place and represent Syria at Tokyo 2020 along with compatriot Mohamad Alsabbagh, something that would provide an incredible boost to the Aleppo triathlon community.

“It is my dream to make our athletes able to compete at the Elite level and achieve their dream of competing like Gomez and Brownlee. What we do is more than coaching for these young people who have no little more than war for the last 10 years. Training is a bond, it is entertainment to cheer them up. Triathlon lets us run from our reality and our fear.”

Listen to the full interview in Episode 7 of the World Triathlon podcast on Spotify, Apple and Google.