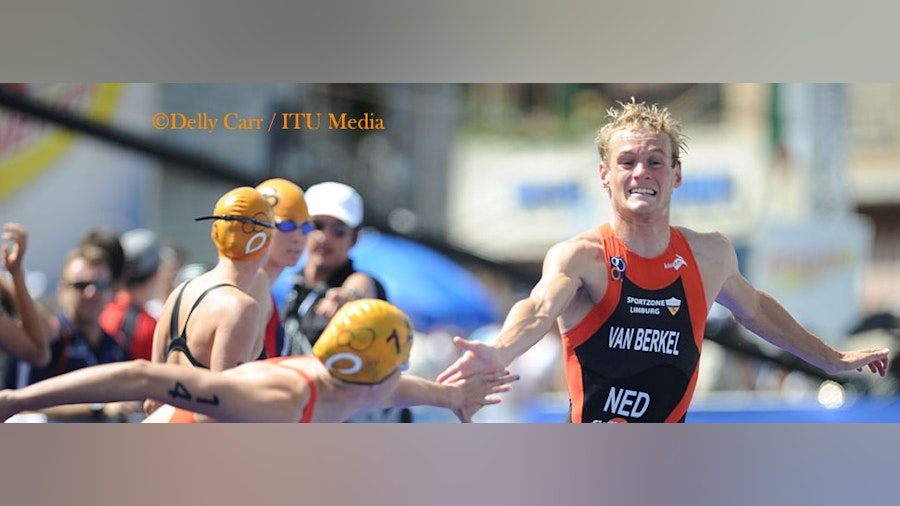 The decision for the Lausanne Photo of the Week was an interesting up and down battle. At first Delly Carr’s shot of men’s start over that azure blue water took an early lead. But that was quickly cut into when Dutch fans jumped on board mid-week. With hashtags like #orangeisthenewcool and plenty of Hup Holland in the comments below the voting, image No.7 of Jan van Berkel in full stretch tagging teammate Danne Boterenbrood jumped out to almost 40 per cent of the vote. But in the final day of voting, it seems Hungarian fans had caught on to Janos’ stunning image of Zsofia Kovacs creating a ripple in the water, and that started to rack up the votes. But it wasn’t enough to claim victory, eventually claiming a total of 26.29 per cent to No.7’s total of 32.74, which means that the Netherlands team are through to the ITU Photo of the Year final.

The star of the photo himself, van Berkel, tweeted that he couldn’t think of a better way to describe the dynamic mixed relay format.

Jan van Berkel @janvanberkel 14 Dec
“There are fotos where I look better, but No.7 describes Team Triathlon better then any words.”

In Lausanne, both Delly Carr and Janos Schmidt were on deck, which means that this week there are two photographer’s choices. Delly’s pick was that start image, that had initially led the voting, as it met all his criteria for sports photography perfection. “My favourite swim start image of the year. Gomez, Brownlee, Brownlee, colour, reflections, arrows, and peak of the action. For a sports photographer, it doesn’t get any better.

While Janos was caught up in the excitement of Team Triathlon, in his choice of Melanie Annaheim screaming at her Swiss teammates. “I really enjoy the Lausanne Team Triathlon world championships because of its special atmosphere which is different from the other triathlon races in the year. Instead of fighting for themselves - as its usual at the rest of the year - athletes are in teams and to cheer for each other with devotion.”

But back to this week’s results, did you agree? See all the nominees here. Let us know your thoughts below. Check back on triathlon.org next week when we unveil the finalists for the Beijing Grand Final, and you can have your say again.